California Gov. Gavin Newsom says the Trump administration has told states they can’t offer unemployment benefits to federal employees who are required to report to work without pay during the government shutdown.

Newsom called a letter sent to states by the U.S. Department of Labor "jaw-dropping and extraordinary" as he met with TSA workers at the Sacramento International Airport Thursday afternoon. "So, the good news is, we're going to do it, and shame on them."

The governor explained that California will offer the workers unemployment coverage, despite the federal government telling the state it can't do so for workers still on the job. Newsom says he believes California is on strong legal footing. Colorado and New Mexico are also planning to defy the order.

TSA employee Miguel Pagarigan, who commutes from Vacaville each day, said he's not sure how long he can afford to go without pay as the shutdown — which entered its 26th day on Thursday — continues.

“Because of the shutdown and being furloughed — or basically, not being paid — I had to put a ‘for sale’ sign on my house on Sunday," Pagarigan said, beginning to cry as he spoke.

TSA workers are among the more than 400,000 federal employees who are working without pay.

The Trump administration does not appear to be opposing unemployment benefits for federal workers who are staying home during the shutdown.

The 380,000 federal employees staying home during the shutdown are eligible for unemployment aid.

Jim Nielsen, the top Republican on the state Senate’s budget committee, says he respects that Newsom is acting “from the goodness of his heart.”

But, Nielsen cautions, “If we start doing too many things ‘California alone’ — making it our burden and responsibility — it’s gonna make some real problems in the future for California.” 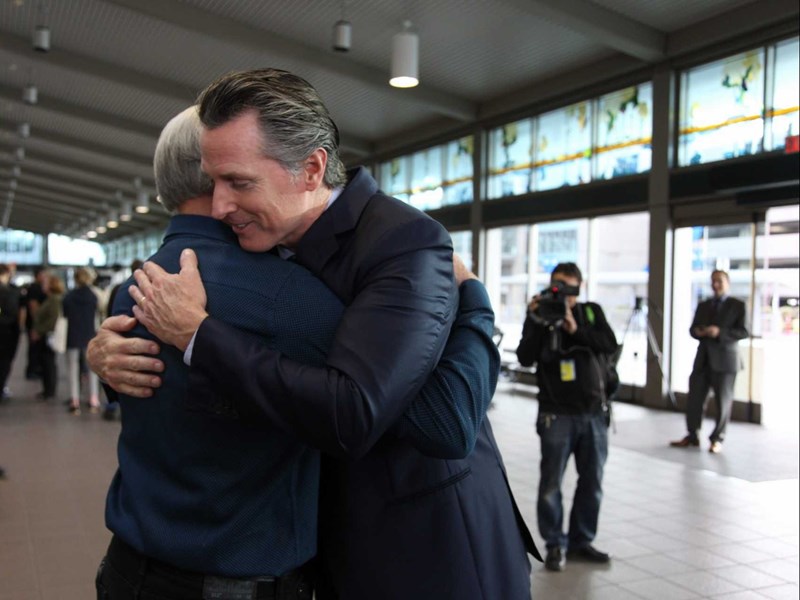 Phil Miedema, a 68-year-old federal employee,  said he was supposed to retire in December but the shutdown held up his paperwork.

"I'm not spending money," Miedema said. "In fact I was concerned just driving out here wasting the gas and have to pay for parking so I could have my voice heard. My lifestyle is just on total hold."

Miedema said he has one month’s savings and after that he’ll have to take out a loan to pay next month's bills.