Kelley Conner had lived for 14 years in a house she owned in Magalia, the unincorporated area north of Paradise, California. It was a modular home with a two-car garage and a little barn in the back. But it was among the 14,000 single-family homes that succumbed to the deadliest, most devastating fire in the state's history last month.

"I have a flag in my front yard, and the flag is standing. And then there's nothing in the background where my house was," Conner said.

So, Conner bought an RV. Parked in an empty lot behind her son's house in Chico, the small city about 20 miles from Paradise, it has two rooms — enough space, she says, for herself, her three cats and her two turtles.

Conner wants to rebuild. She owned a print shop in Paradise, which also burned down, and she sees the RV's mobility as a useful temporary solution. She plans to move back to Paradise as soon as this month, live on a neighbor's land, where there's a well, and open a new, temporary, print shop. She figures the emergency responders and construction workers who will spend the next two years or more tearing down and rebuilding the town will also need access to mailing and printing services.

But, there was another, practical, immediate reason to purchase the mobile unit, after she first fled the fire.

"Motels and rentals and things like that were just non-existent," Conner said.

The devastation and displacement from the fire is compounded by another, two-fold housing problem. The fire destroyed some of the most affordable home options in an area where housing supply was already tight, while at the same time driving up demand for housing, as displaced residents seek new places to stay. 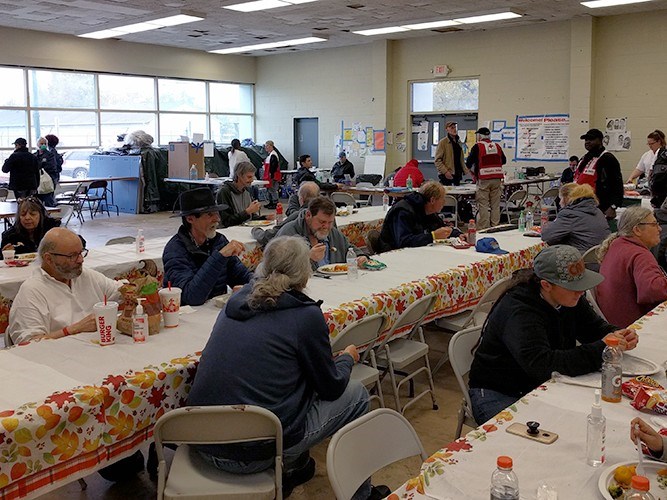 Residents of a Red Cross evacuation shelter eat lunch. A month after the fire, 500 remained in the aid group's shelters, where they sleep on cots.Ben Bradford / Marketplace

Nearly 75 percent of homes that were on the market in Chico sold in the two weeks after the fire, according to the local realtors association.

The rental vacancy rate is "at zero," according to Jennifer Morris, executive director of the North Valley Property Owners Association. She says it was less than 2 percent even before the fire.

"Chico can't absorb 30,000 people," said David Bronson, president of Sierra North Valley Realtors, the local trade association. "We barely had the capacity to absorb what we were getting."

Hotels remain sold out for 20 miles around and 200 houses sold in the two weeks after the fire, some for tens of thousands of dollars above asking price, nearly all to fire survivors. Now in a city of 90,000, about 80 homes remain for sale.

Buying a home is often lumped in with achieving the American dream, but Michelle Moy talks about her new purchase as an act of desperation, after the house she and her fiancé were renting in Paradise burned down.

"This obviously wasn't the time for us to buy, but what am I going to do?" Moy, who is also a realtor, said. "I think a lot of people are in the same situation."

She and her fiancé, Donald Jackson, have stayed at his father's house in a remote area without internet about an hour from Chico, where Moy now works. She said she needs to be closer. So, they used the $15,000 from their renter's insurance and their savings for a down payment on a house.

"All of this money I've got you understand is going toward me getting a place, I don't have any money left over from this," Moy said.

If it closes after escrow, she will still live 40 minutes away, in the city of Oroville.

"I think a lot of folks are going to end up relocating to a lot of other areas just because they can't buy or rent here anymore," Bronson, the head of the realtors association, said.

To help alleviate the housing crunch, The Federal Emergency Management Agency is readying as many as 2,000 trailers for the area.

For now, 500 people are still sleeping on cots laid out in rows at evacuation shelters. Many may not have had homes before the fire. Others, like Julie Pearson and her son James, had homes, but few resources — and now they have even less.

"We lost everything but the clothes on our back," Pearson said.

She said they live on disability insurance and lack good credit, making the odds of finding a place in the surrounding area, where they have lived all of their lives, slim.

"I would give anything to be able to go back to Paradise," she said. "I was born and raised there, and so were my kids. We don't know anything but Paradise."