A boy named Maxwell sits with his feet dangling, holding an oversized acoustic guitar and waiting for his turn to strum. The songs coming from the rehearsal space are recognizable to many — “Birthday,” “Blackbird,” “Rocky Raccoon” — but they’re decades older than most everyone rehearsing them.

The kids that make up The Beatles Guitar Project are just some of the couple thousand students who have played with the Sacramento Preparatory Music Academy since 2010. This Sunday, they’ll perform The White Album live in Folsom: a 60-piece ensemble, featuring professional musicians and local celebrities, that will celebrate the record’s 50-year anniversary.

Sorina Pometta is a seventh-grade guitar student who will perform Sunday. Like most of the musicians, she has her White Album favorites.

“I like ‘Piggies’ and I like ‘Revolution 1,’ those are my two favorite songs to play and sing,” she said before heading into rehearsal.

Pometta is a student at Franklin Park Private School, one of three schools where the academy brings classes to students. Ben McClara founded the music school as a place where young folks could learn to play instruments while getting a foundational understanding of music. A student may take on bass or ukulele, but they’ll also appreciate music theory, harmonic structure and good rhythm.

In the beginning, small classes were held in a cramped studio on V Street and Stockton Boulevard. “I think I fit eight to 10 students in there and they were like on top of each other. Bumping guitar necks and everybody’s bumping into each other,” McClara remembered.

That’s also where he started The Beatles Guitar Project, the performance branch of the academy. The group has had four major shows paying tribute to the band. McClara transcribes and arranges each album so it has a sound that’s very close to the original, but leaves room for adaptation.

“The end of The White Album leaves a lot to be desired,” he said. “Especially in a live show.”

So, they change things up a bit in more experimental songs like “Revolution 9,” or ones that don’t work as well live. 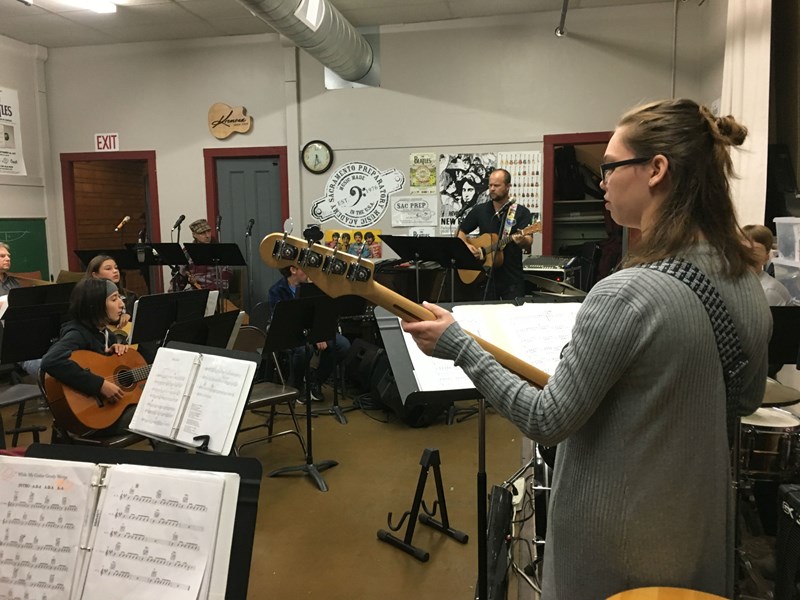 Justice Nelken is one of McClara’s original students, and Sunday will likely be one of her last performances with the group. The 19-year-old bassist is transferring to an out-of-area college soon. Back when she started, the academy was small-scale.

“We’ve gone from teaching four kids during a winter guitar session, or eight kids during a summer session ... to 32 kids at a public school,” McClara said. They’re in three schools now and want to keep expanding.

Nelson will be studying political science, not music, when she transfers. But one of her best memories was last year, when the group sold out an iconic local venue.

“We filled the Crest Theatre. That was probably the most amazing thing I’ve seen in my life,” she said.

That was the first time the band played The White Album. She hopes that this concert, which supports the nonprofit academy’s effort to bring music classes into schools, will be packed too.

The Sacramento Preparatory Music Academy will perform its tribute to Beatles’ White Album on Sunday, November 25, at the Harris Center in Folsom. Learn more here. 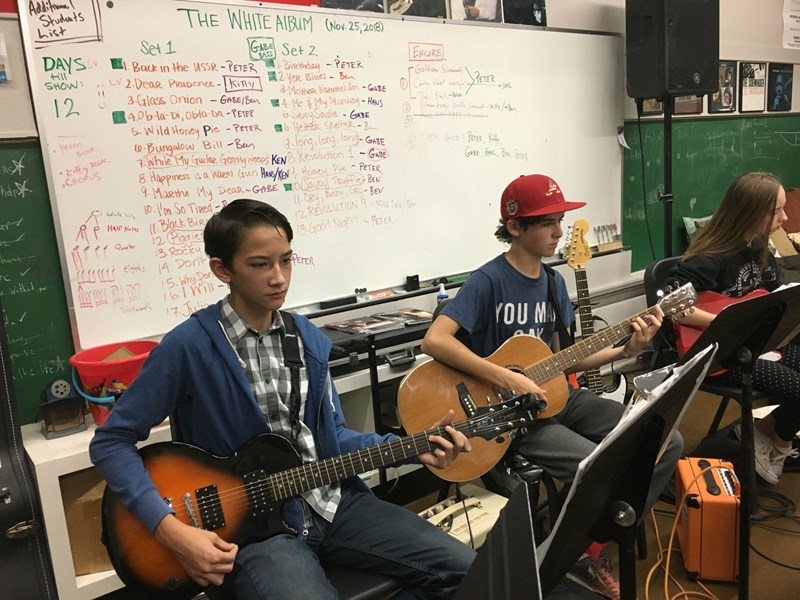 Julian Urtz (left) and other students with The Beatles Guitar Project rehearse The White Album.Kate Gonzales / Capital Public Radio
Follow us for more stories like this