Patty Rough lost her Paradise home and most of her belongings in the Camp Fire, and she had no place to cook a family meal on Thanksgiving.

But she and her husband are safe, and she was still able to spend the holiday with her children over plates of turkey, cranberry sauce and pie at a feast for thousands of people put on by volunteers.

She's sad about everything she lost but realizes that others have far less.

"Today we're grateful; I don't know about happy," she said, tearing up as she sat next to her son and across from her daughter. " 'Happy' Thanksgiving is kind of a weird thing at the moment."

Rough is among the thousands of people whose homes burned down when the deadly wildfire ripped through Paradise and surrounding communities. At least 83 people died, and more than 13,000 homes were destroyed.

The blaze was 90 percent contained Thursday, two weeks after it began. Rain that fell Wednesday night and started against Thursday afternoon aided the firefight but complicated the search for human remains in the debris left by the blaze.

Wet, windy, cold conditions were making it hard for workers to see and move.

It wasn't a normal Thanksgiving for any of the evacuees or workers.

Matt Berger, a member of a FEMA Urban Search and Rescue team from Orange County, said he and his colleagues are trying not to "get too wrapped up in the fact that we're not at home for the holidays."

"It's just another work day for us — trying to bring some closure to some of the families that are missing their loved ones," he said, standing in the cold outside a Paradise store that didn't burn down.

Volunteers tried to bring a dose of normalcy to the difficult time. The Washington-based nonprofit World Central Kitchen cooked 15,000 meals, teaming up with Chico-based Sierra Nevada Brewing Co., the local university and the town of Paradise to serve them. 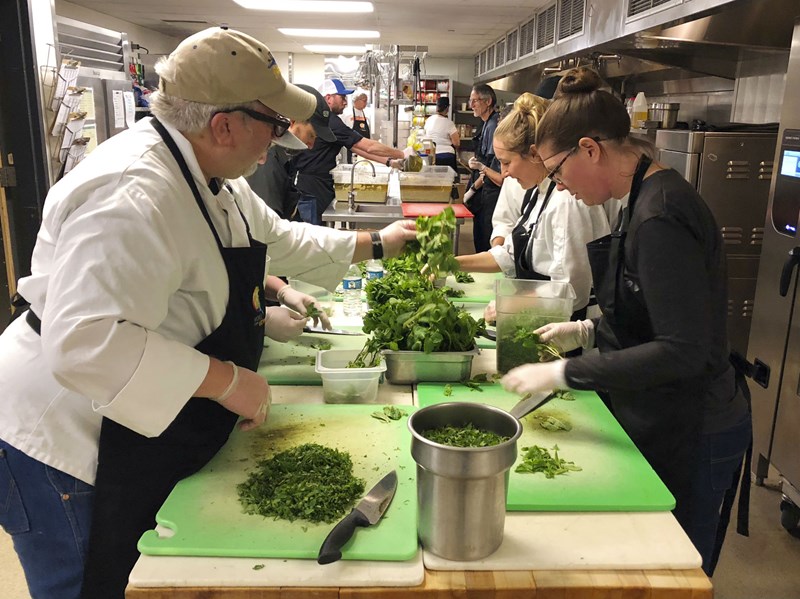 Michael Reining, left, and Chelsea Meddings, right, chop mint at California State University-Chico on Nov. 21 in preparation for a community Thanksgiving meal for survivors of the deadly Camp Fire. They are volunteering with World Central Kitchen.AP Photo/Kathleen Ronayne

Celebrity chefs Jose Andres, who started World Central Kitchen, and Guy Fieri cooked and stopped for selfies with fans while reflecting on the tragedy that brought them there.

"This is going to be a year we're never going to forget," Andres said.

Eduardo Garcia was happy for a warm meal and a place to spend the day. He sat alone at a long table but said he enjoyed the sense of company the gathering in an auditorium at California State University, Chico provided. Years ago, Garcia helped build the auditorium, plastering the outside walls.

He lost the Paradise home where he lived, and his immediate family is in Hawaii. For now, he's living with a friend in Chico.

"I don't have anywhere else to go," he said. "Even though I'm not with my family, you can feel good around other people who are in the same situation."

Outside the Paradise area, scores of people opened their houses to strangers to provide a more intimate Thanksgiving.

Rachael Anderson hosted a displaced mom and daughter at her home in Redding, about an hour and a half from Paradise. Anderson knows what it's like to live in a community devastated by flames: A massive wildfire swept through Redding last summer.

She didn't lose her home, and she now wants to share it for the day with Athenia Dunham and her 15-year-old daughter, Natalie.

"They've lost their home, their traditions, whatever it is that they do. I just want to give them a little piece of home," Anderson said. "That's what Thanksgiving's about; it's not just about your blood family — it's about giving thanks and helping each other."

Faun and Danny O'Neel were hosting three families at their home in the Sacramento-area city of Folsom.

Faun O'Neel's parents and grandparents lost their homes in a Calaveras County fire several years ago, so she said opening hers to others was a "no-brainer."

Thanksgiving at a stranger's house may not be what her guests initially expected, but O'Neel hopes it can provide some calm in a trying time.

"A few hours of normalcy," she said. "Where they can laugh and enjoy other peoples' company without thinking about what they just lived through and what is in front of them." 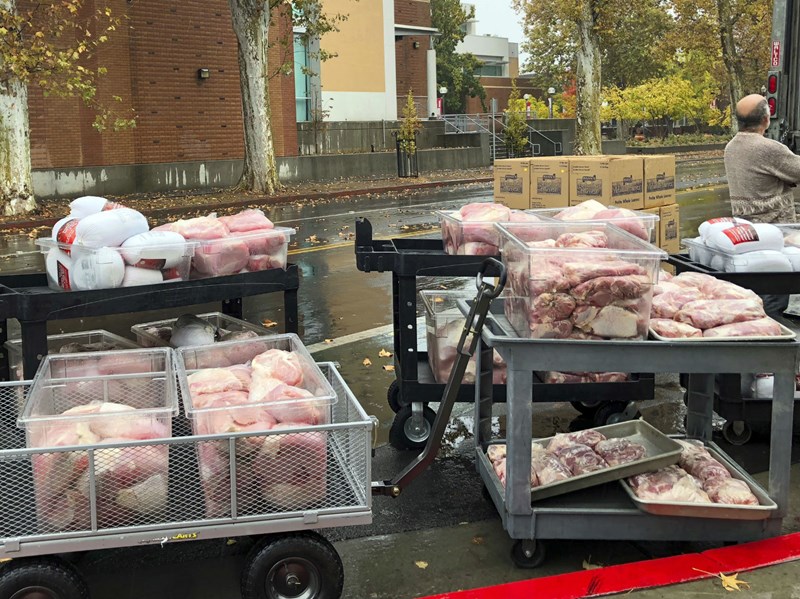 Hundreds of frozen turkeys are unloaded on the campus of California State University on Nov. 21, 2018. The nonprofit World Central Kitchen is preparing them for a Thanksgiving meal for residents displaced by the Camp Fire.AP Photo/Kathleen Ronayne
Follow us for more stories like this 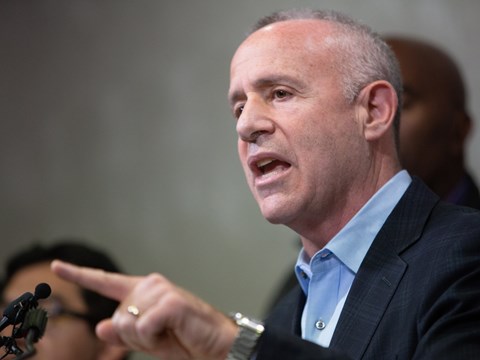