It's been a week since the Camp Fire forced 52,000 people in Butte County into some phase of homelessness.

Many of the people who got out ahead of the fire now find themselves in Chico living next to people who were already homeless. Now both groups are being helped.

Even though the American Red Cross has said monetary donations are preferred, people driven by a desire to help continue to organize community drives to collect anything they think will help.

Trucks are arriving from all over California and are on their way from as far away as Texas.

Shelters in Butte and Sutter County are being inundated, leading  some people to set up their own donation drop off locations for clothes, blankets and toiletries.

And once word has gotten out, food trucks from Chico, Woodland and Sacramento have arrived to dish out meals

One location is the Big Lots parking lot in Chico.

Victoria Parry and her daughter, Kelli Hornback, are trying to find clothes.

"This is only one area. They're all over town,” Parry says. Her daughter was both trapped by the fire but also saved from it by virtue of being in the middle of the K-Mart parking lot in Paradise last Thursday morning.

“We were there until about 5 o’clock (that night) before we could get let out,” she says. "We were surrounded by fire and downed power lines, so we had nowhere to go.” 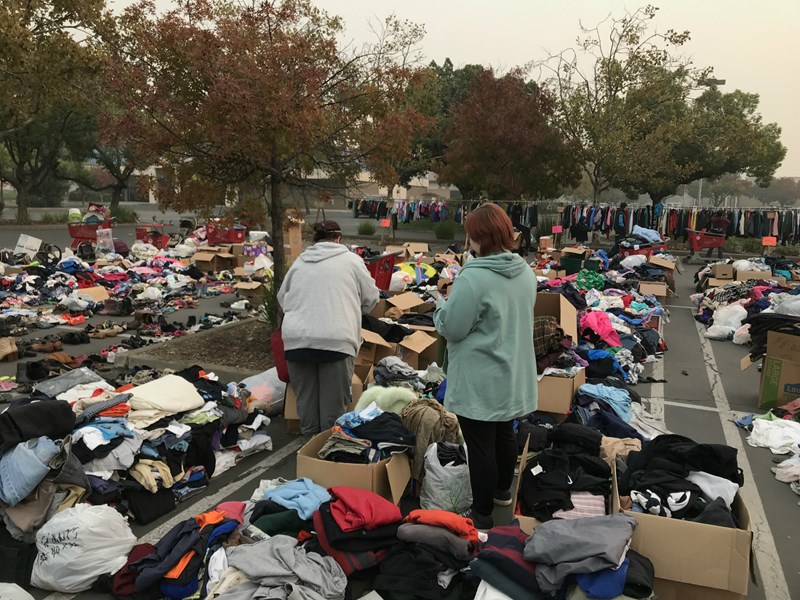 Jose Guttierez organized the Big Lots drop-off site. He says there is so much, he’s worried about what to do with what’s left if it rains next week. The National Weather Service says there is a chance of rain Tuesday, Wednesday and Thursday.

“Maybe I can get a storage bin,” he says.

A couple of blocks away there's another collection site at Walmart, which has also turned into a makeshift tent city.

For people evacuated from Paradise and Magalia, the offers of help are appreciated as they continue to recover from the shock of losing everything they own.

"You got any needs at all?" asks one volunteer walking between the tents, which straddle a bike path south of the store.

Mike Martini is one of the volunteers at the Walmart site. He's going tent to tent with an offer, and a warning.

"Within an hour there is a shelter that will take you if you guys want free transportation to it. It's in Los Molinos or in Gridley. It's a roof over your head, food, but it leaves in an hour. I'm just going to be up front. This is all going away."

Martini says a Walmart employee has been coordinating the use of the parking lot and land with volunteers, but the tent site won't be permitted to stay past the weekend.

Along with food, people in need have been handed tents, tarps, sleeping bags, chairs, and blankets. They're much appreciated by all of the campers, though some of them were not the intended recipients.

The person Martini is talking to is Dakota Reiley. He’s 19 and has been homeless on the streets of Chico for five months. He arrived at the parking lot two nights ago and is grateful for the generosity there.

"You don't have to go through all those trash cans just to find food or even know when your next meal's gonna be or where your next place is gonna be or anything like that,” he says. “Before this, I didn't even have this tent. I was literally sleeping in a park, no blankets, no nothing. I was freezing every night." 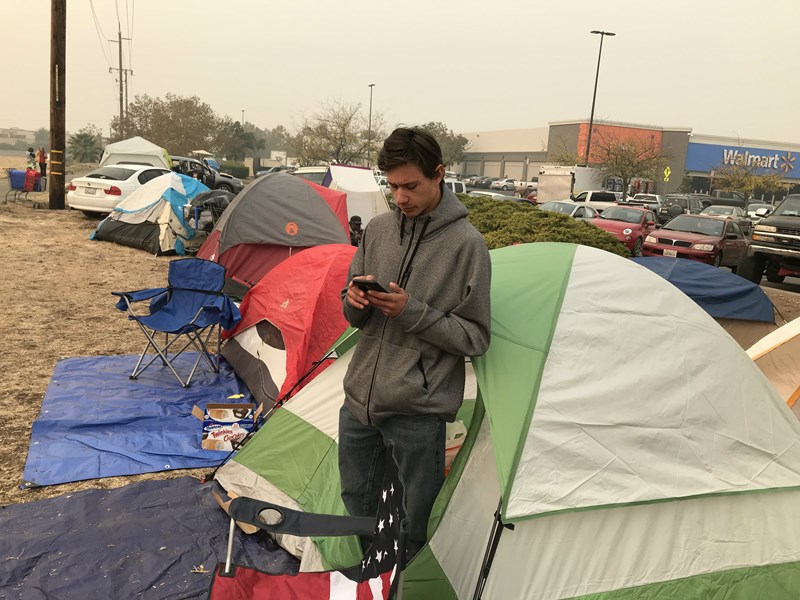 Laura Whitaker says she is “not homeless, but is without a home." She evacuated from Paradise Thursday and has mixed thoughts about her new neighbors.

"It was just us who had lost our homes and gone through the fire,” she says. “I do have a heart for a lot of the homeless. But then there were people that got arrested out of here for smoking crack, selling crack. We've got our kids here. You know?

"There was a lady yesterday arrested because every time she saw someone was gone out of a tent, she was going in and pillaging through what we do have,” Whitaker adds.

As to why she and her family aren't in a shelter? She says they'd rather stay outside with the family and the dog.

"I have a rottweiler that's a loveable big baby who went through all of this and drove through the fire with me. We're not going to put her in a dog shelter," she says. "And I think some of us feel, even though it's cold, it's a little bit better kind of being in a little family unit having something that's something better than the chaos of the big shelter."

Thursday began with three shelters full and three with space. Twelve hours later, two of those shelters were also full.

Tonya Boyd chose early to stay at the Red Cross shelter at Bidwell Junior High in Chico. Her family totals five adults and four children. Like many others, the shock of losing everything is slowly yielding to thoughts of the need to plan for the future.

"We're gonna stay in Chico,” she says, but then rethinks. “We're hoping to stay in Chico, anyway. It's just so devastating. I don't think we could go back. We've been there 20-plus years. It's pretty much all gone."

The American Red Cross says it will begin the process of helping people find their way out of this disaster once the Butte County Sheriff's Department and Cal Fire give the okay for people to return to the places they evacuated a week ago.

California Office of Emergency Services says it hopes to have a triage center established in Butte County by Friday to help people find services they need.