A rabbi sang out the names of the 11 victims in guttural cries, letting the prayer’s melody carry him through the haunting roll call. Each syllable floated up to the white drapes beneath Congregation B’nai Israel’s sky-high ceilings as the audience listened with heads bowed.

On Monday night, Sacramento-area Christian and Muslim clergy, law enforcement officers, elected officials and hundreds of residents gathered to recite a memorial prayer for those killed in the Oct. 27 shooting at the Tree of Life synagogue in Pittsburgh, and support the region’s Jewish community in the wake of the weekend’s anti-Semitic killing spree.

Every seat in B’nai Israel’s cavernous worship space was full, with children in their parents’ laps and latecomers arranged cross-legged on the carpet. Garth Silberstein, rabbi at the Kenesset Israel Torah Center, tied the events to Sacramento’s own history with hate crimes.

“Here in Sacramento we know what it is like when our synagogue is attacked by the forces of hatred,” he said. “But we are drawn here by more than that. More than by our fear, by the fact that what happens to one Jew anywhere in the world is felt by all of us.”

Many speakers and audience members recalled coming together for healing and strength after fire bombs hit three Sacramento synagogues in 1999; B’nai Israel, Congregation Beth Shalom and Kenesset Israel Torah Center. The blazes, ignited by a pair of white supremacist bothers, destroyed holy books and did millions of dollars worth of damage.

For many in attendance on Monday, the events of last weekend felt real and threatening, despite being thousands of miles away. Erica Bobrow, of Placerville, said attending the vigil quelled some of her fear.

“I feel comforted that we’re able to come here and feel the connection of the community,” she said. “We want to act, but we also are hurt and we’re fighting the inclination to isolate.”

Alex Rogers, a young man from Roseville, was grasping for a way to stop the many forms of discrimination and violence he said happen too often in Sacramento and around the world.

“It’s a slow subtle ramping up,” he said. “It’s been a tumultuous weekend, not just for the Jewish community. Meeting here, sending out prayers is great. But actions have been taken in the past that were bad, and actions need to be taken moving forward to make it better.” 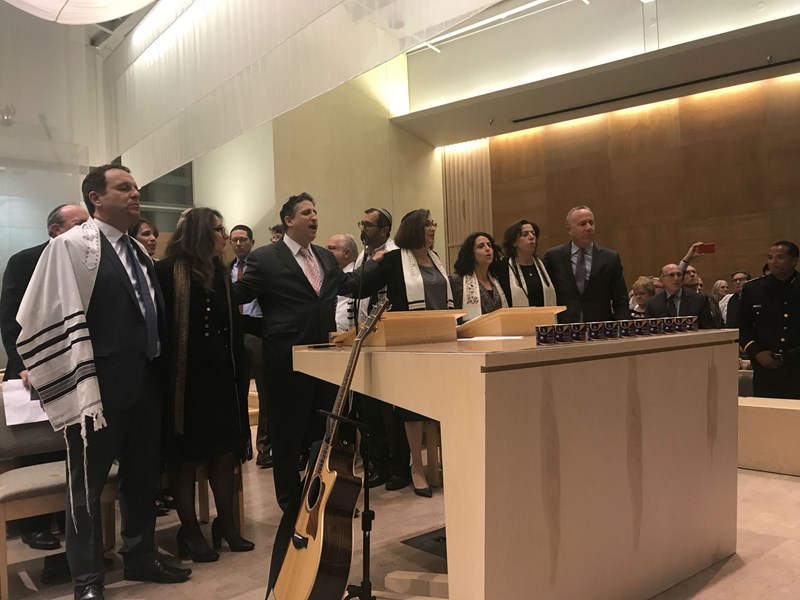 Sacramento Mayor Darrell Steinberg joins rabbis and cantors from several Sacramento-area synagogues as they lead the audience in a prayer for peace after the shooting of 11 people inside a Pittsburgh synagogue on Oct. 27.Sammy Caiola / Capital Public Radio

Sacramento Mayor Darrell Steinberg condemned the perpetrators of the east coast shooting and emphasized the need to reach across cultures for help. He said the high attendance at the service was a testament to Sacramento’s ability to do just that.

Rashid Ahmad, a member of the Council on American-Islamic Relations, said standing against hostility and hate crimes falls on everyone.

“We saw today how when the people of good conscience come together, they can make a difference,” he said. “Like the rabbi said, our prayers are finished, but our work is not finished. And I believe in that.”

Police Chief Daniel Hahn, U.S. Congresswoman Doris Matsui, State Senator Richard Pan, and Mona Alfi, the congregation’s rabbi, also spoke to the crowd. All acknowledged the loss, rage and fear rippling through the Jewish community, but vowed to look ahead to a brighter future.

The event ended with a prayer for peace, during which many attendees stood and held hands with the people on their left and right, be they a stranger or a friend.

Correction: A previous version of this story misidentified the office of Richard Pan. He is a California State Senator.