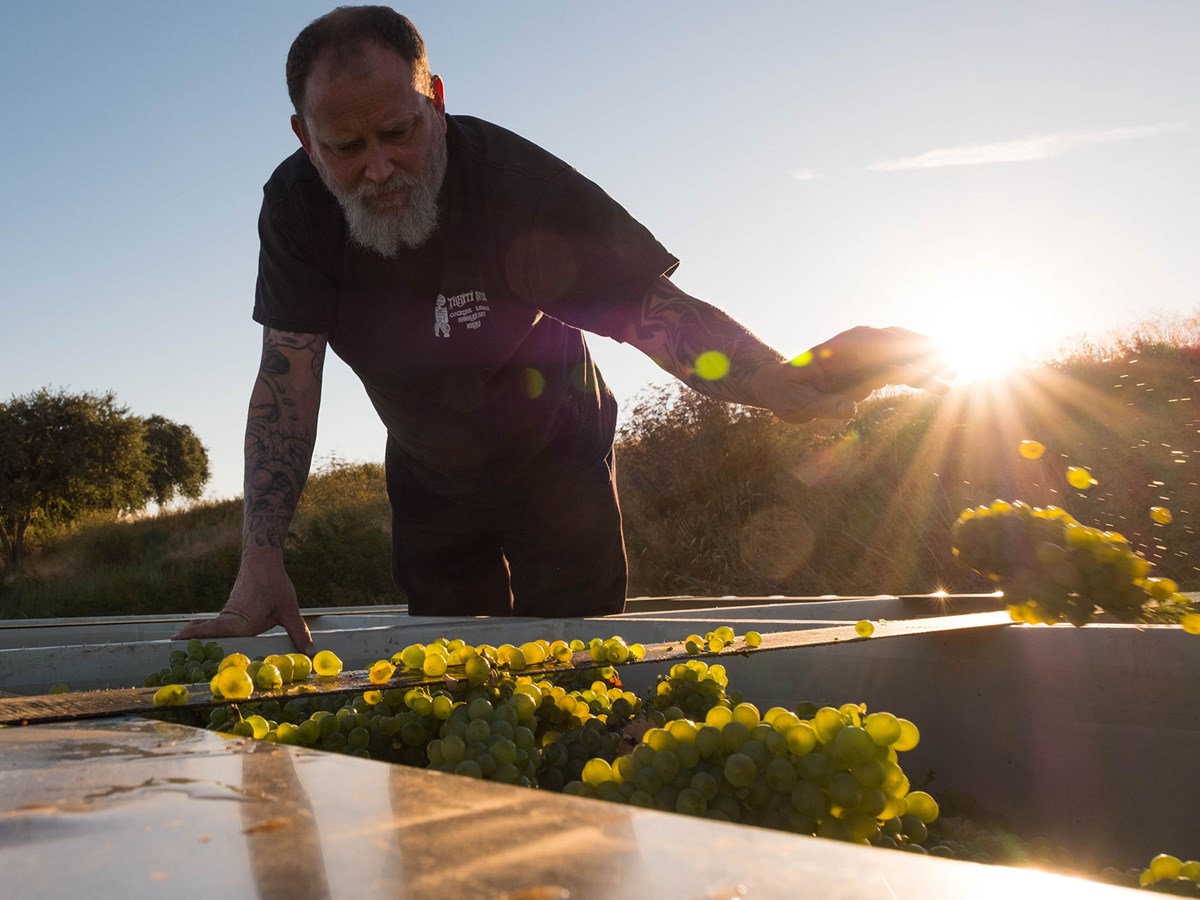 Craig Haarmeyer sorts through grapes looking for leaves and gauging the quality of the fruit.

A curious oenophile might follow the trail of chenin blanc grapes to the Loire Valley of France or all the way to South Africa. Or, they could hop on a bicycle in Sacramento and head south along the river.

Before too long in the small town of Clarksburg, vineyards spread out from the levee, their green canopy glowing against the grey-brown soil.

David Ogilvie’s family has farmed this region for nearly a century. He seems right at home hanging out at their barn, with a view of the Sacramento River levee on one side and vineyards on the other.

At 38, Ogilvie is manager for Wilson Vineyards, the family business. He makes his living selling Clarksburg grape varietals that fetch good prices: petite sirah, chardonnay and pinot noir. Those go to wineries in Sonoma, Napa and Sacramento.

But the bottle of wine on the table today is chenin blanc. He calls the making of Silt, this small-lot varietal his “side project,” but his eyes brighten when he talks about it.

Ogilvie’s not alone in his attraction to chenin blanc. Over the last five years, he says he’s seen an uptick in interest from vintners buying the varietal to make their own small lot wines, including winemakers in Sonoma, Napa, Sacramento and Santa Cruz. 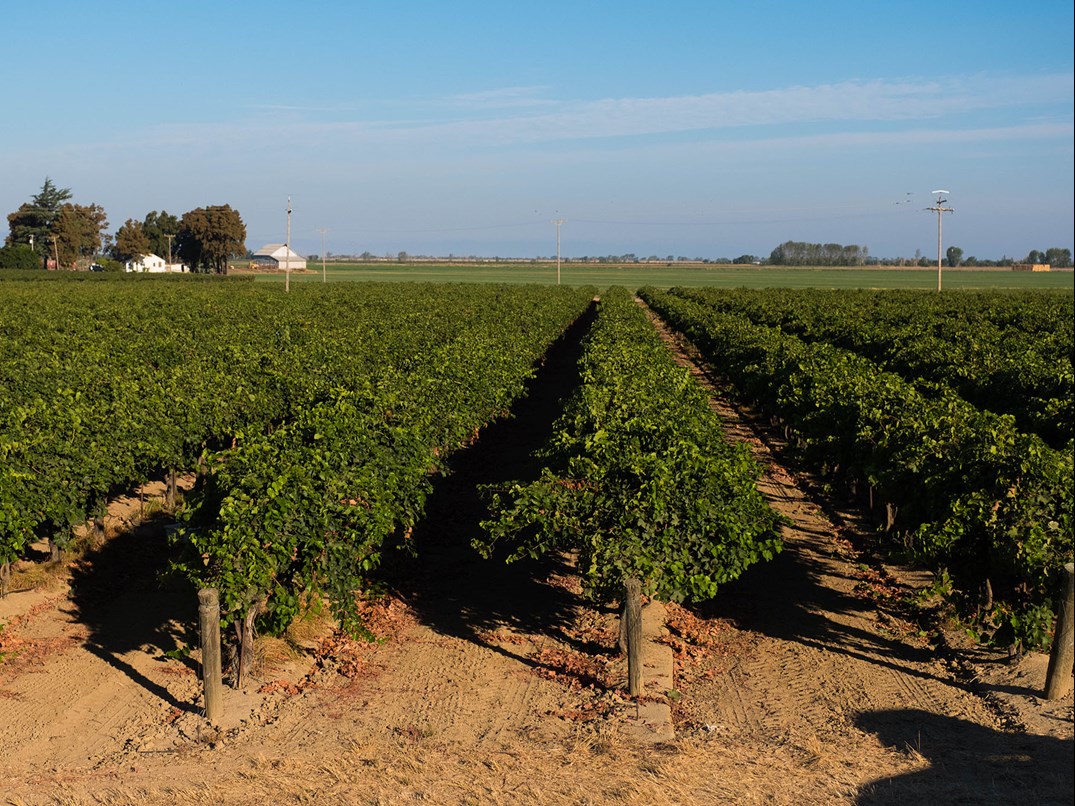 Wine rep Amy Grabish agrees. She sells California, Oregon and a small collection of imported wines to restaurants in the greater Sacramento region. “I’ve noticed a greater availability of small winemakers making some lovely chenin blancs, almost on par with the rise in popularity of rosé wines, ” she said.

Grabish is hearing more talk about the varietal, and she says that’s translating into more people willing to bring chenin blanc onto a restaurant wine list or into a retail store.

This handful of winemakers focusing on chenin is a comeback from the ’70s and ’80s, when the varietal came to be known as a filler for cheap boxed wine. California’s big wineries would add it into wine blends made from “grapes of varying quality,” as Ogilvie put it.

“Chenin blanc was the ‘seasoning’ to other white wines. They liked it for its acidity. It would go into a boxed wine they’d call ‘chablis,’ or bulk champagne,” he said.

When it came to white wine, Ogilvie says many consumers favored ones that leaned on the sweeter side. That demand translated into plantings. In 1982, there were 44,000 acres of chenin blanc planted in California, according to wine grape data from the United States Department of Agriculture. At the time, chardonnay grape acreage was half that.

Even though consumers weren’t paying a lot for those chenin wines on the shelf, they were mass-produced. By sheer volume, wine grape growers could make a lot of money selling chenin blanc.

Ogilvie’s vineyards reflect that. He’s got 55 acres of chenin blanc, a mere 5 percent of his family’s vineyards.

“You’re going to plant whatever you can get more revenue per acre for. Right now, that’s not chenin blanc,” he said.

He’d gladly plant more chenin, but for him to do that he’d need a larger California winery to agree to a longer-term planting contract of 10 years or longer. Ogilvie says small lot vintners can’t take on that kind of risk. 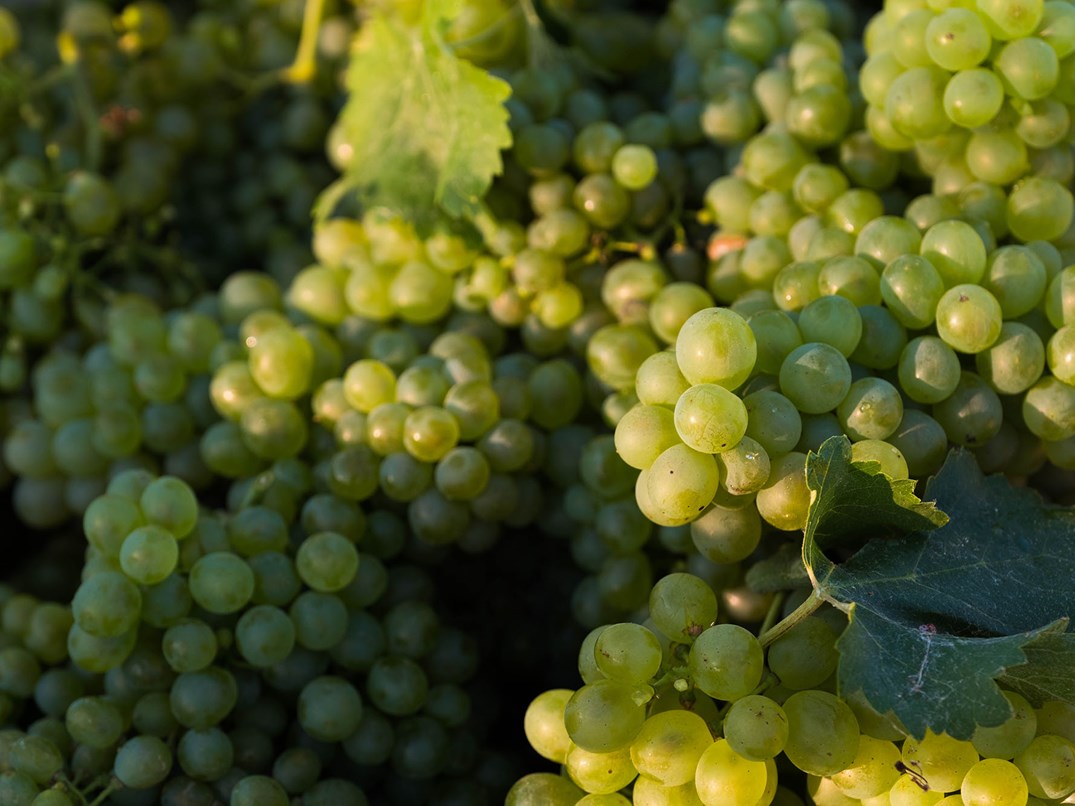 Local Sacramento vintner Craig Haarmeyer is one of a cluster of California winemakers working on boosting the profile of this varietal by making small-lot wines from grapes grown in the Clarksburg area.

It’s barely dawn on a recent September morning when Haarmeyer pulls his truck into a block of chenin blanc vines near Courtland. With him, a tiny crew: His son, Alex Haarmeyer; his wife, Kelly Haarmeyer; and their friend Eric Danch.

Turns out, a couple of other volunteers didn’t show. “The romance of wine making deflates pretty quickly when that alarm goes off at 4 a.m.,” says Haarmeyer, laughing.

This bearded guy with a dry sense of humor came to wine-making in his early 40s. When he’s not making wine from Delta chenin he sells wine and beer at Corti Brothers. At 53, he’s now 10 vintages into chenin blanc.

Making the wine from grapes grown in the Delta is key for both Ogilvie and Haarmeyer.

In winemaking in general, the soil and climate of the region are essential factors in cultivating distinct aspects of each grape varietal. In Clarksburg, as Ogilvie points out, those factors are soil, conditioned by years of river flooding before the levees were built, and the region’s “40 degree diurnal shift”: In other words, summer days that get up to 95 degrees, combined with the Delta Breeze which can cool vineyard temperatures down to 55 degrees.

“In general, chenin blanc is a variety that holds its acidity really well,” Ogilvie explained.

But he says local conditions accentuate what he calls the “acid backbone that allows chenin blanc to age and be food-friendly.”

Ogilvie continued: “Then, the warmer days allow it to get some of these tropical notes like apricot, pink grapefruit peel and even sweet citrus.”

Back in the vineyards, Haarmeyer’s crew disperses among the green rows soaked in early morning sun. He crouches on the underside of the vine and snips dense clusters of grapes into a white bin, scooting it along as he moves down the row.

The foursome will hand-pick about a ton of grapes before the sun is high in the sky. The grapes from this one harvest will be bottled as a style of sparkling chenin blanc called pétillant naturel, or “pet nat” in vintner lingo. 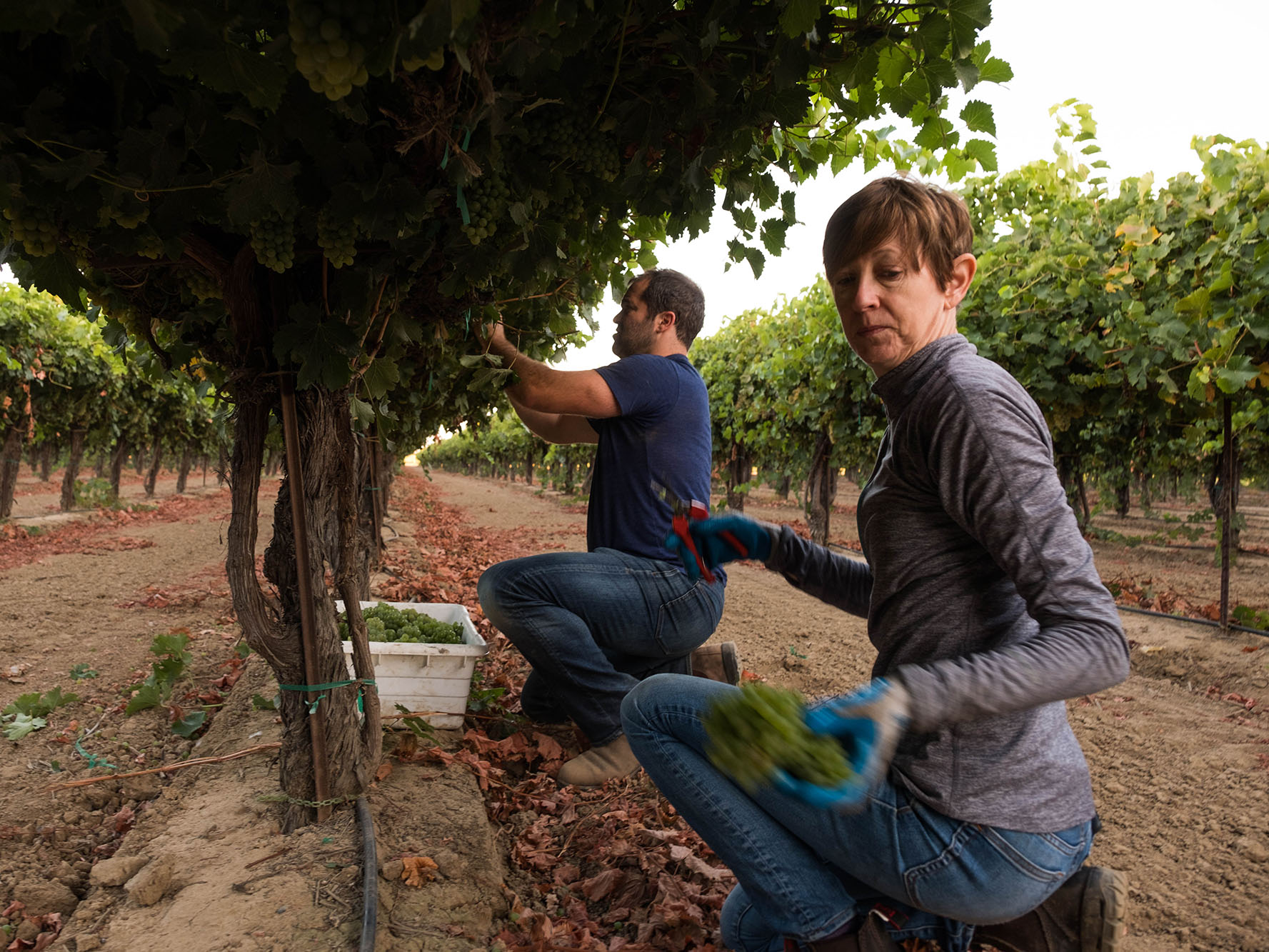 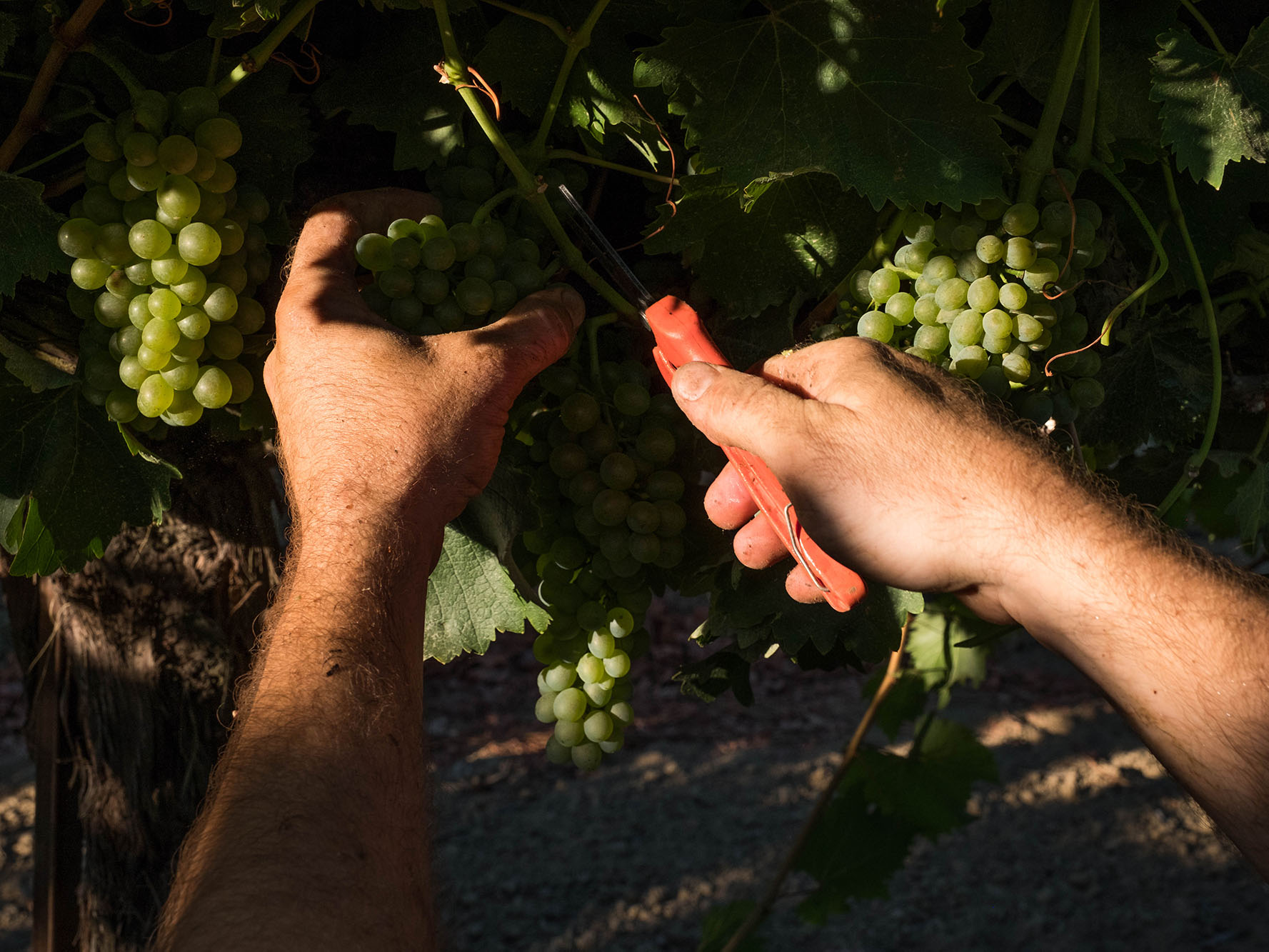 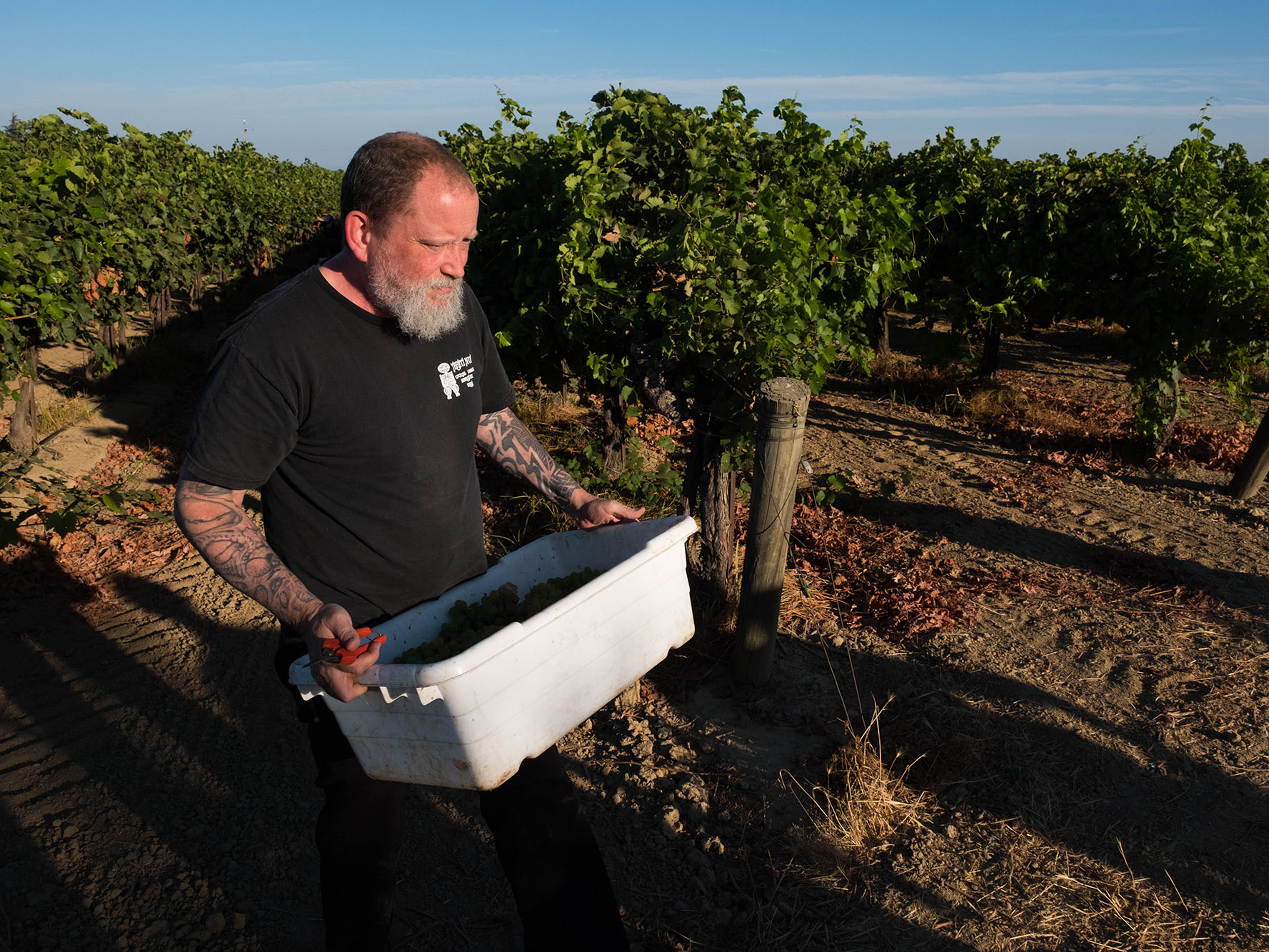 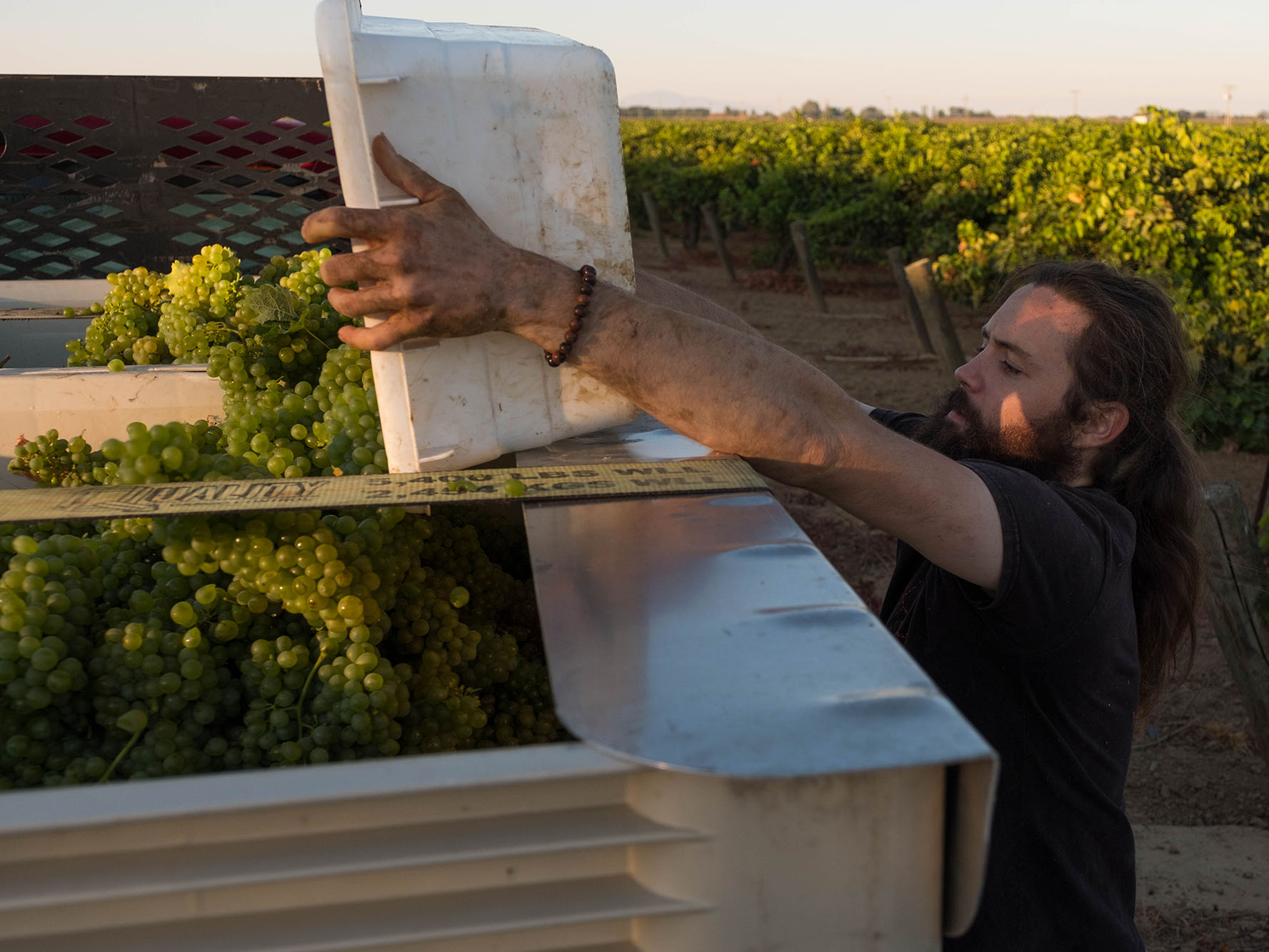 Haarmeyer describes it as a “more rustic, casual style” of sparkling wine.

The vintner’s motto seems to be: let chenin blanc do its own thing. Or, what happens in the vineyard, and exactly when the grape is harvested, matters much more than what happens afterward.

“There’s a lot less processing here,” Haarmeyer says. “We don’t make corrections to chemistry. So, if we think sugars are too high, we don’t add water. If the pH isn’t where we want it to be, we don’t add acid. It’s just going to be the characteristic of this vintage.”

Haarmeyer says he was drawn to working with this particular grape on account of what he calls its 3D character. He’s sampled varietals from vineyards in South Africa and the Loire Valley of France and says each style is totally distinct. He says that’s true on the Delta, too.

“We work with seven different vineyards for our chenin projects. There’s no doubt that each one unique. They have their own personalities,” Haarmeyer says.

He talks about chenin blanc wines from Clarksburg having distinct aromas such as lemon juice, green onion and crushed oyster shells, whereas wine from the foothills tends to be “a bit more honeyed.” Haarmeyer finds both regions display “a great backbone of minerality.”

The vintner hopes that making small lot chenin blanc will allow him to have his own vines instead of grapes from others. At the same time, Haarmeyer is well aware that chenin blanc is not going to unseat hugely popular varietals that “run the roost” in California.

He’s just going to keep doing his thing, confident that chenin blanc from his home turf will stand on its own in the crowded landscape of California wines.

Editor's note: Eric Danch, who assisted with the wine harvest, is reporter Julia Mitric's brother in law. He had no editorial input on the story.