The city of Sacramento wants to put a bike path on the Sacramento River levee along Pocket Road. But the city doesn't own all of the land. It’s offered to buy it, but some residents are fighting the idea.

Hundreds of thousands of dollars have been offered to the owners of seven parcels for easements on the land they own along the Sacramento River. But the owners have turned the city down.

Adam Randolph is a senior engineer with the Public Works Department. He says the city doesn’t own the land because people used to be able to buy everything up to the water’s edge when buying land near the river.

“We didn’t have all of the entitlement requirements that we have now for development,” he said. “There are numerous property owners along the Sacramento River who own the underlying fee title of the levee where this bike trail would go.”

He says the city wants to build something similar to the bike trail along the American River Parkway. But that’s exactly what is scaring some property owners in the Pocket neighborhood.

He turned the offer down. He says he’s afraid homeless camps and crime will move in, like they have along sections of the Parkway.

"We have a unique property and it's a sanctuary. It's private. It's beautiful, and this issue of introducing a bike trail that would completely open up as a thoroughfare, it's going to bring all of the things into our neighborhood we're concerned about,” Murphy said. 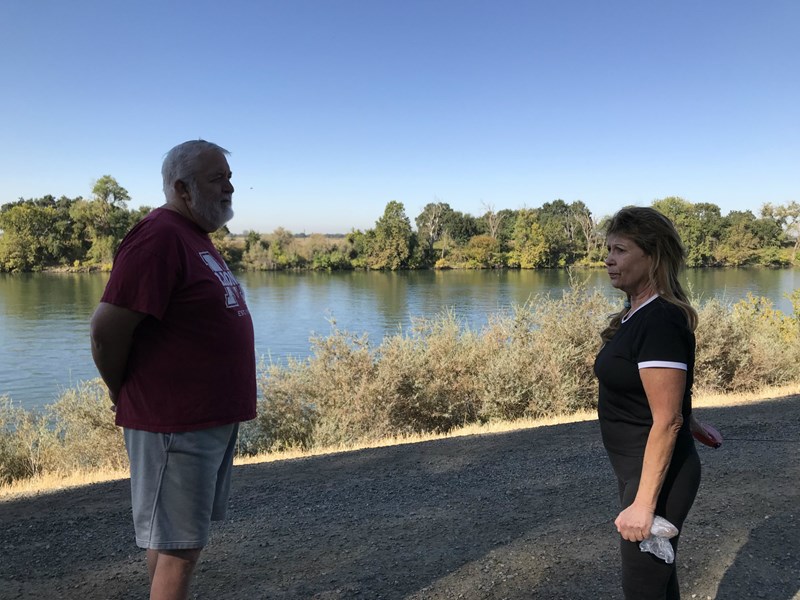 Pocket neighbors Jack Gullans and Chris Moreno live on the same street but have different ideas about a proposed bike path that would cover the Sacramento River levee behind their homes.Bob Moffitt / Capital Public Radio

Some of the property owners say they’ve already had problems with trespassing and vandalism.

Not everyone is against the bike path. Chris Moreno lives just down the street.

She says developers promised a bike path when she bought her home 30 years ago. There is an existing bike trail on Pocket Road.

This week, and for the third time this year, the city put an item on the city council agenda that would allow eminent domain proceedings to begin if the property owners and the city don’t come to an agreement.

For the third time, the city pulled the item.