Police formed a line between the BLM protesters and the counter-protesters after the two groups broke out into heated arguments. Police also shut down J Street at 13th Street outside the convention center due to the protests.

BLM protesters laid purple nylon coffins, typically used as Halloween decorations, on J Street before marching through downtown Sacramento following calls to disperse from police around 1:30 p.m. They returned to the convention center around 3 p.m. There were no arrests, according to a Sacramento Police Department spokesperson.

The BLM protest of the COPSWEST Training & Expo at the Sacramento Convention Center was planned to mark six months since Clark's death. Demonstrators have gathered in front of the Sacramento County District Attorney's Office each week since then demanding charges against the officers who shot Clark.

Pro-law enforcement demonstrators had also gathered near the convention center.

Clark’s mother, Sequette Clark, and his grandmother, Sequita Thompson, were at the protest downtown. Clark’s mother said that it was a “slap on the face” that the Sacramento Police Department had yet to apologize to the family. His brother Ste'Vante Clark called for police accountability.

“We keep hope that the system will hold these officers accountable for what they did to my brother," Ste'Vante Clark said. "It’s been six months that nothing has happened. The police haven’t wrapped up their investigations. None of the district attorneys have brought charges against the police officers.”

The Rev. Al Sharpton also announced Tuesday that he would be traveling to Sacramento this week, seeking charges against the officers.

The protests also come one day after a Sacramento County Sheriff's Deputy was shot and killed in Rancho Cordova. When asked what people do following the shooting, Sheriff Scott Jones urged community members to come to the protest to show support for law enforcement.

"I know that the public in large measure supports us and share in our grief and they want an outlet for that," Jones said outside the convention center Tuesday. "They want to do something but they don't know what to do. I offered this as a way."

With officers from law enforcement agencies attending the convention inside, supporters held signs and waved American flags in support of law enforcement. 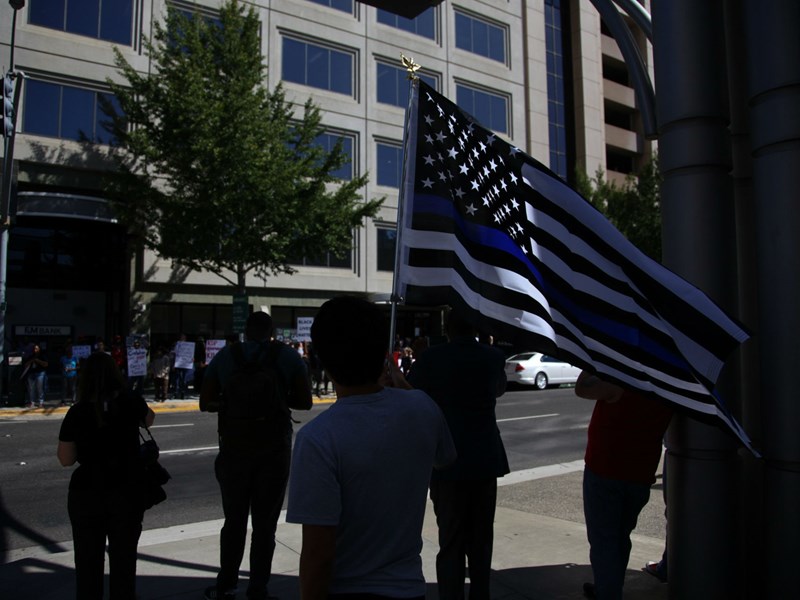 A counter-protester waves a flag in support of law enforcement as people protest in downtown Sacramento.Andrew Nixon / Capital Public Radio

Frank Herzog  wore a red “Make America Great Again” hat from Donald Trump’s 2016 presidential campaign. Herzog said he doesn’t believe race has much to do with the actions of law enforcement.

“It should not be that," Herzog said. "There’s good guys and bad guys on both sides.” 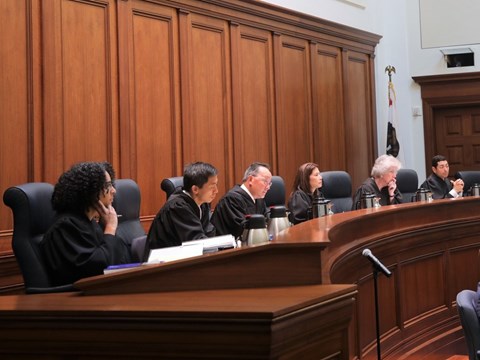