On a typical day in the paramedic training classroom on the American River College campus, six people can be found talking at once.

During a recent visit, a handful of students in paramedic uniforms surround a 56-year-old man, who’s complaining that it feels like an elephant is sitting on his chest.

"It hurts, like I'm being stabbed," the man says, while students attach sensors and tubes.

Chaos. That’s how one might describe the classroom simulations at American River College's paramedic training program.

Brandon Faddis is a paramedic intern and the team leader. “We're gonna take you to the hospital,” he tells the man after he gathers information and makes an assessment.

When Faddis finally graduates, he plans to use his paramedic license to join his father and uncle in the fire service. For now, though, he's on the phone, talking to workers at a hospital, letting them know a patient is on their way.

"174 over 98. 110 pulse,” he says — while ignoring the fact his patient is throwing up all over himself. "Respirations at 25. We should be there in two minutes," Faddis continues as his patient moans.

Suddenly, the man pops up and out of his chair. "OK, stop!” says Grant Goold, who is now done being a patient and returns to being the class’ instructor, a role he’s had for two decades. Vomiting aside, he says Faddis handled the situation well.

"We want our medics to be able to walk in and very quickly decide what we say is ‘big sick’ or ‘little sick,’” Goold said after the training scenario. “I think he made a good decision.”

Faddis already has an emergency medical technician, or EMT, certificate. But was surprised by the difficulty of the paramedic program, which he says is like a full-time job.

"There’s a lot in this field that I didn’t realize I didn’t know and it's opened my eyes to how much more studying I need to do," Faddis said.

To become a paramedic, a student must have an EMT certificate and complete hundreds of hours in a hospital, classroom and ambulance. The students at this American River College class are about halfway through their training.

Three-fourths of them don’t pay tuition because of the California College Promise Grant, which waives fees for low-income students and veterans.

Two years ago, the state also started contributing $200 million a year to community colleges as part of the Strong Workforce Program.

The California Hispanic Chambers of Commerce says it too plans to create a scholarship program to help even more students pay for their education. Eloy Ortiz Oakley, chancellor for California Community Colleges, says labor and business are both pushing for more job training for young people.

"There is increasing demand for credentials to be able to enter the workforce or get promotional opportunities. They see us as that potential solution," Oakley said.

This investment in job training at colleges comes as studies suggest that industry’s demand for skilled workers is increasing. A Georgetown University study that looked at job growth and education requirements through 2020 predicted that 65 percent of new jobs created will require at least some college.

At the same time, California Community Colleges continue to expand offerings that give students job training, and recently received funding to launch a 115th campus, albeit online.

Alana Velasquez is one of the American River students who qualified for the grant. Money has always been tight — she says she was “a little bit homeless” when she was 10 — and she now rents a room in her parent’s house, which helps keep costs low. But it still took a while to save for other classroom expenses.

During a recent class at American River College, Velasquez led a group of students, who were on a simulation phone call involving a little girl who was struggling to breathe.

"Not responding, coughing, hand-held nebulizer, IV,” Velasquez called out to the group.

"I can't breathe right,” said the little girl, who is actually a fully-robotic simulator. The robot's condition determines how the paramedic interns respond. 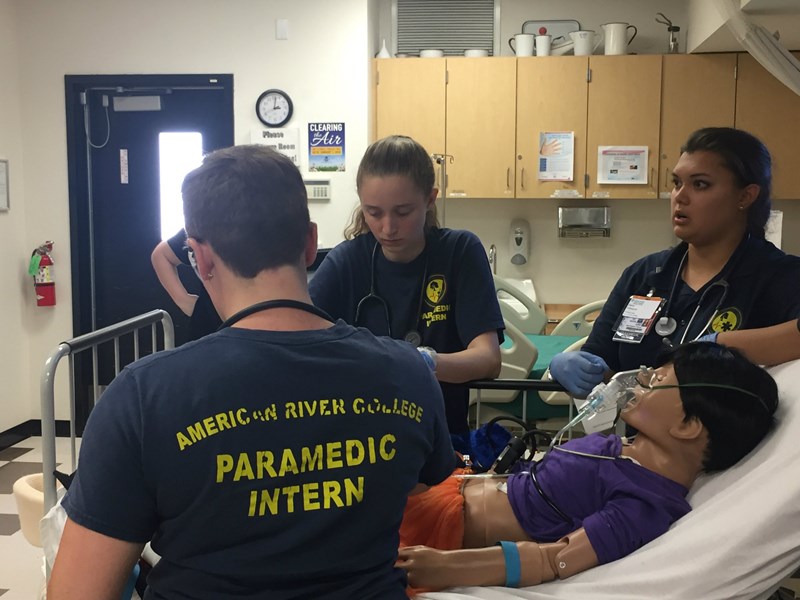 "When students start out, it used to be they would go into the hospitals, and the first time they ever put a needle in a patient, it was a real person,” Mundling recalled. “So, all of that awkwardness, all of that fear, all of that lack of knowledge and experience culminated in to a pretty painful experience for a person."

The robots heads, feet and hands all move, but they aren't cheap; the lab's new baby robot cost $65,000.

Goold says more high-cost, high-tech items are on the way. A 45-foot classroom on wheels, with an emergency room in the front and an ambulance bay in the back, will tour high schools as soon as February.

"Opportunities like this are really great for those of us who do have dreams of helping people and moving forward in our lives,” she said. “We’re able to do that here. If it was just private, university-type stuff, we might not have access to those kinds of jobs."

Before You Go To The Beach, Check Its Pollution Score