Even as California’s booming economy pumps money into state coffers at unprecedented levels, Gov. Jerry Brown is once again proposing a budget plan that seeks to limit permanent increases in new spending.

His latest plan is to place the bulk of an $8.8 billion surplus into rainy-day reserves and one-time investments.

“As Isaac Newton observed: What goes up must come down,” Brown said Friday at the state Capitol, urging the Legislature not to squander the state’s fiscal health. “Let’s not blow it now. We’ve worked too hard for that.”

The governor released his $138 billion “May Revise” budget proposal on Friday, an update of his $132 billion January spending plan.

The new surplus of $8.8 billion is up over January’s $6.1 billion projection. Brown proposed to place nearly $6 billion of that surplus into the state’s two reserve accounts: its regular operating reserve and the Rainy Day Fund created by voters in 2014.

The Rainy Day Fund would grow to its constitutional maximum of $13.8 billion under the proposed budget. 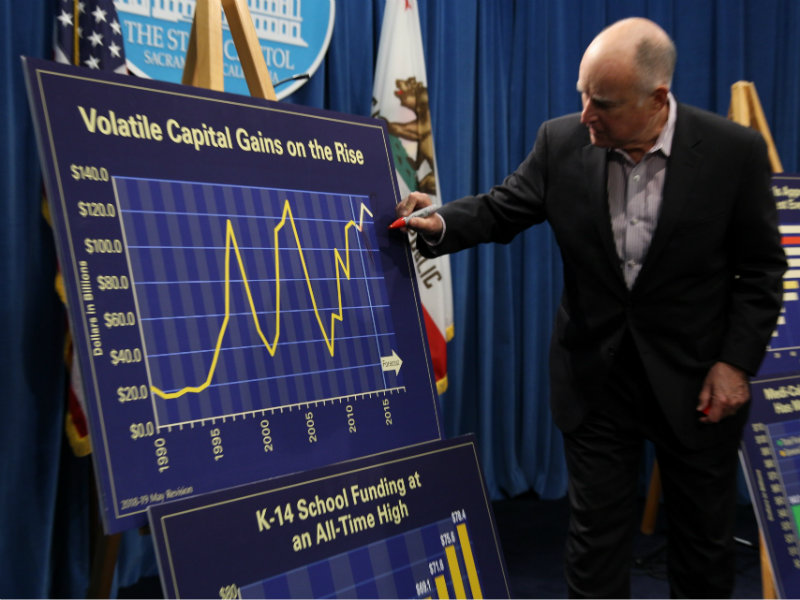 California Gov. Jerry Brown presents his May revision to the state budget, detailing a plan to place the bulk of an $8.8 billion surplus into rainy-day reserves and one-time investments. Andrew Nixon / Capital Public Radio

“It can get giddy at the peak,” Brown said. “I'm trying to leave the most responsible budget for the next governor.”

The governor urged lawmakers to invest in these reserves, citing volatile capital-gains revenues, which he said are at highs now but could plummet in coming years.

“I don’t think the money’s there,” Brown said. “You may think it’s there, but it will disappear very quickly.”

Assembly Republican Leader Brian Dahle’s response to Brown’s revised budget was to urge investing the surplus by paying down debt, shoring up reserves and focusing on infrastructure.

“Obviously, I’d like to see taxpayers get that money back, but once the government gets ahold of your money, it’s impossible to get them to let go,” Dahle wrote, adding that he agrees “100 percent” with Brown’s proposal to to fill up the rainy day fund.

The budget proposal calls for an additional $3 billion in Proposition 98 spending for K-12 schools and community college, to an all-time high of $78.4 billion.

However, other than $100 million each in one-time funding for deferred maintenance projects for the University of California and the California State University, the budget holds the two systems’ state funding increases steady at the proposed 3 percent hike from January. And as a bulwark against future tuition increases, Brown is proposing bill language that would reduce state funding for the UC or CSU should either university choose to raise tuition.

Brown’s budget also proposes to place a $2 billion “No Place Like Home” homelessness bond on the November ballot. It would pay to build affordable housing and shelters. A law of the same name was previously signed by the governor as part of the 2016 state budget package, but money has not been spent due to legal challenges.

The May Revise release on Friday marks the start of a frenzied month of negotiations with lawmakers, leading up to the Legislature’s June 15 constitutional deadline to pass a state budget.

Majority Democrats have spent the last several months crafting their own spending plans, which are likely to include more money for child care, higher education and health care, among other programs.

“As we finalize the budget, the Assembly will prioritize investments that expand access and improve affordability in our health care system, and that help cities and counties address the growing homelessness crisis,” Speaker Anthony Rendon said in a statement. “The budget also must address the needs of CSU and UC students, faculty, and staff.”

Senate President pro Tem Toni Atkins was less specific in laying out her caucus’ priorities. In a statement, she called the governor’s proposal “a strong starting point,” but added “we also have to lift up the families that are struggling now.”

In addition to infrastructure projects, some Republicans argue the state should put money toward alleviating the rape kit backlog and a program in the attorney general’s office that seeks to confiscate guns from Californians who pose a risk of violence.

Asked about some of the funding increases pushed by lawmakers, Brown replied that they all have some merit. “But we’re already overextended,” he said. “And that’s very hard to believe when we have so much money in the bank. But I’m telling you, we are overextended, given the economic cycle that we’re a part of.”

The total state funds in the proposed budget are $199.3 billion, in addition to $106.6 billion in federal funds.

.@JerryBrownGov wants to put most of the $8.9b projected surplus toward increased costs of existing pgms (i.e. schools, Medi-Cal, IHSS, child care, etc.) & reserves. That leaves $2.5b, which Brown wants to use for one-time investments (infrastructure, mental health, homelessness)

.@JerryBrownGov pegs the #cabudget surplus at just $8.9b. It's likely that other budget watchers believe the surplus is larger.

Gov. Jerry Brown has released his May revision to the state budget proposal. You can read through the summary below, and find more budget documents here.

California Gov. Jerry Brown will release his revised budget proposal Friday morning, with state revenues pouring into coffers billions of dollars above projections. That sets up a debate over what to do with all that extra money.

"That money is a temptation to spend money that will create future obligations," Nielsen said. "When there is a downturn and less revenue, then we’re gonna be in trouble.”

But Democratic Sen. Holly Mitchell — who chairs that committee — said the state must address some of its systemic needs, such as early childhood education, homelessness and health care.

“We’re strategically looking at areas — not where we’re trying to expand government — but where we’re reinvesting in programs that the Legislature of the past decade had to cut,” Mitchell said.

The governor is expected to favor one-time spending over permanent increases.