There were more than 250 people at City Hall, and almost as many unique reactions to the shooting death of Stephon Clark two weeks ago at the continuation of the community forum that began on March 27.

Stacy Dawson felt overwhelming sorrow at the death of a black man who was nearly her son's age. She was on the verge of tears as she recalled watching the video of the shooting with her 18 year old son.

"So, when my son asked, 'Well, mom, why 20 times?' because we're talking about 20 times,” she said of the number of times the officers shot at Clark. “What do you say to your kids when he asks you, 'Why 20 times? He wasn't shooting back, Mom. So, why did they keep shooting?’"

Dawson says she no longer allows her son to wear a hoodie when he goes outside.

“He turned to me and he asked, ‘So, if I’m ever in position where I need to put my hands up, should I just drop? Or should I face them? Should I turn? And my response is, ‘You just drop,’” she said she told her son. 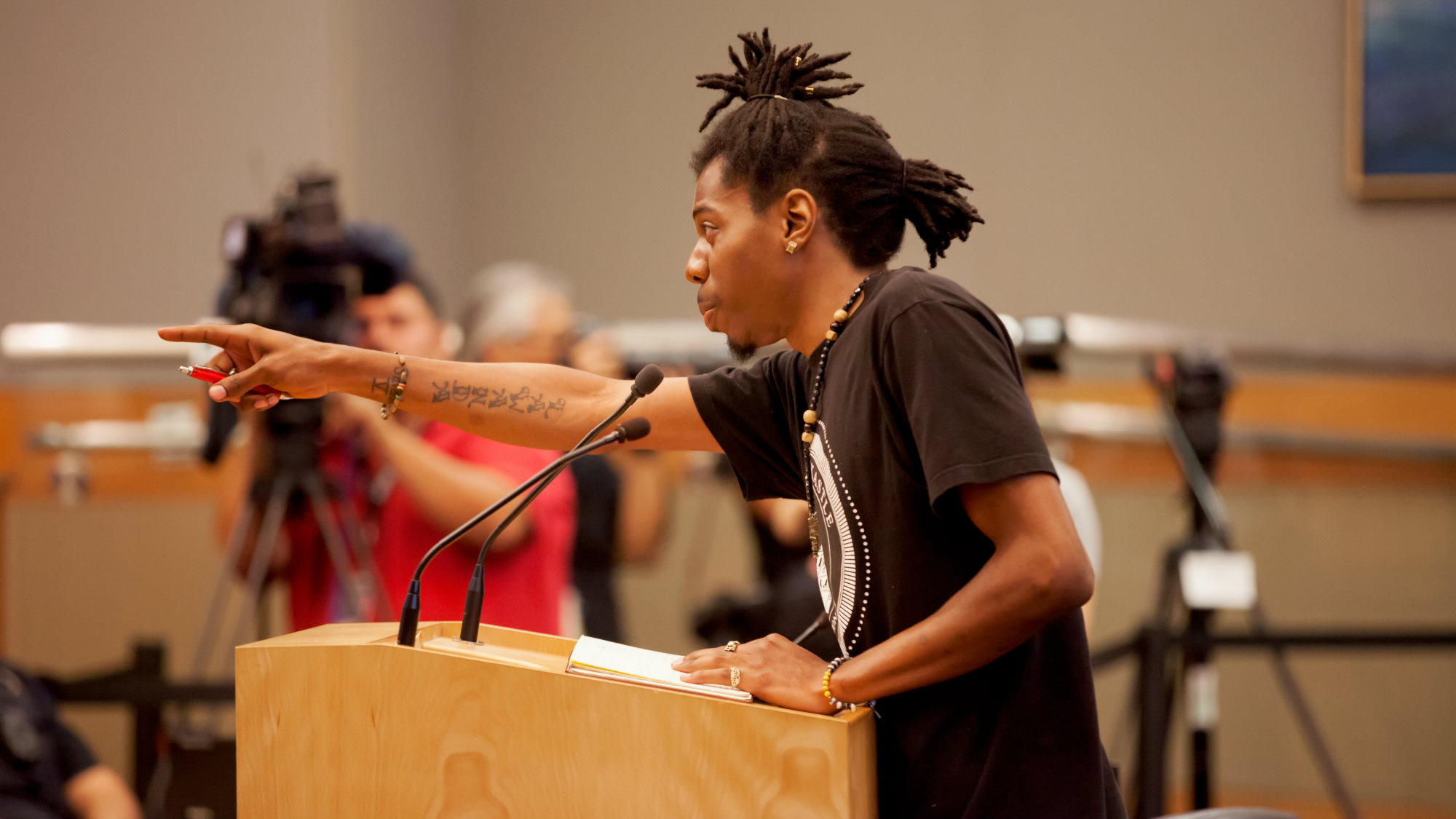 There were several calls for council members to rescind endorsements of DA Schubert in this year's election, including by Flojaune Cofer.

“I'm asking you all to show some leadership and show some courage and break from tradition and rescind this endorsement. It makes no sense. She's never given you anything to warrant your name being behind her,” Cofer said.

One individual who only went by Khy was also one of many who made not-so-veiled references to what could happen if no charges are filed: "If you don't push Schubert to convict and if you guys take inaction, there will be rioting — and we know all your names. A lot of your information is public. We will make sure that —”

Mayor Darrell Steinberg interrupted the speaker: “What is that? A threat?”

Khy responded: “It's not a threat. I'm just letting you know that we know who you are and you're supposed to be part of this community.”

“Your time's up,” the mayor responded.

Steinberg promised "changes at all levels in Sacramento” before adjourning the meeting after more than three hours of testimony. 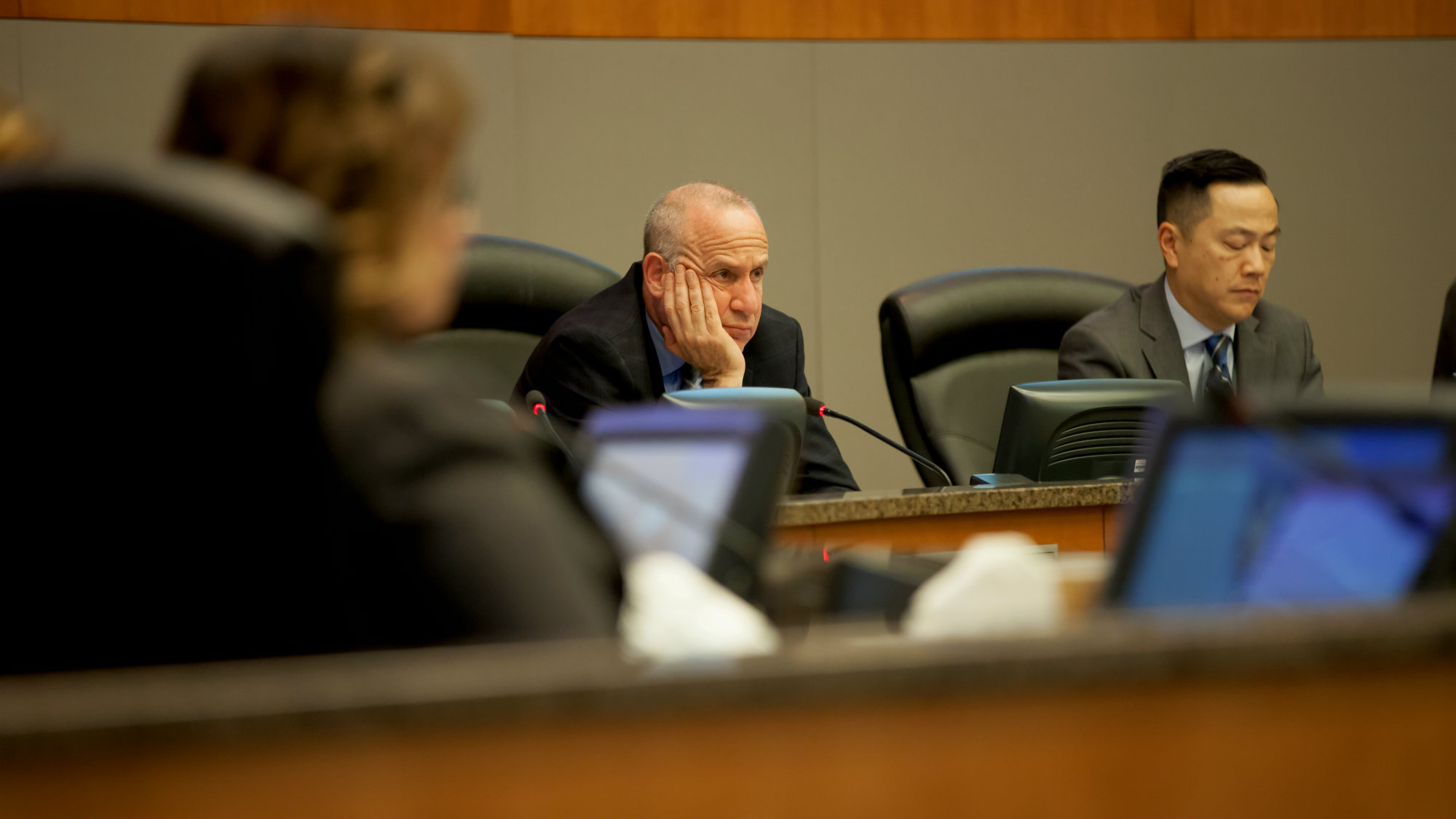 Many had accused council members of apathy during their speeches, but District Two representative Allen Warren said that's not the case.

He shared a story mother telling him about race and the police after a star athlete named Raymond Brewer was shot and killed by police in 1972.

"It gave me a consciousness as an eight year old that ... I don't believe eight-year-olds should have to go through,” Warren said. “To understand that somebody might shoot me or harm me because I was a young African-American man and it was very traumatic, because I wanted to believe that everybody did the right thing all the time."

Warren requested a review of body camera policy and when officers can pause or turn off video or audio. Steinberg promised that would occur at next week’s meeting.

Councilman Larry Carr said he had not forgotten what it was like to grow up in a segregated South. He says he would like to know more about the possibility of having an independent prosecutor at the state level investigate police shootings.

Carr also asked for a “review and revision of the Police Officer’s Bill of Rights.”

At the meeting’s end, Steinberg said he was “willing to be judged by what we do to genuinely help people in our communities who are hurting at every level in every way, whether it’s housing, jobs, human and civil rights, and to give truth that you came here to speak tonight that black lives matter.”

After more than three hours of public testimony, the meeting is adjourned. An emotional Mayor Darrell Steinberg vowed that “At all levels, there will be change in Sacramento.” Then, he banged the gavel and left the chambers. 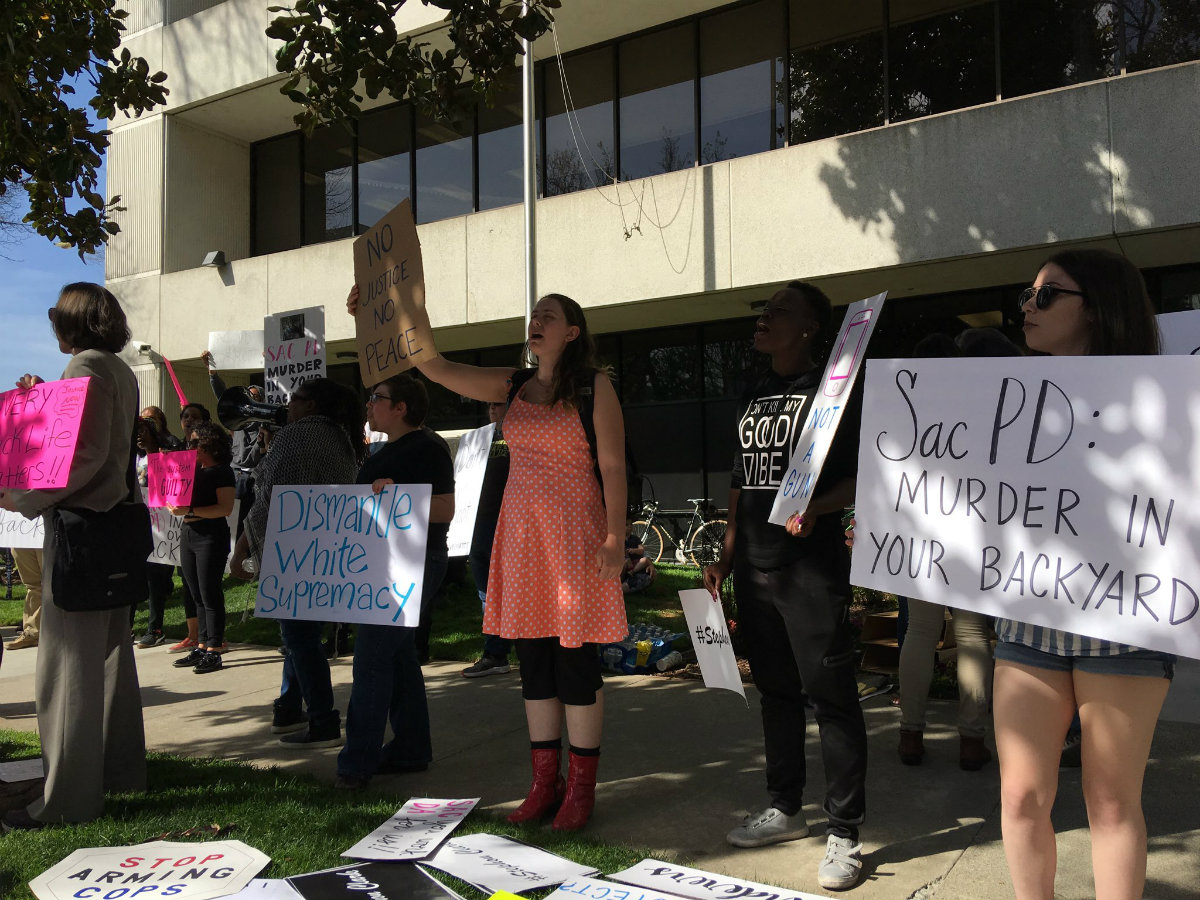 Demonstrations against the shooting of Stephon Clark have entered their third week, and activists continue to gather in downtown Sacramento to protest. Adhiti Bandlamudi / Capital Public Radio

Capital Public Radio's Adhiti Bandlamudi says demonstrators who showed up Tuesday at the DA's office and City Hall are in it for the long haul:

Around 3 p.m., people gathered outside DA Anne Marie Schubert's office, demanding that she file charges against the two policeman who fatally shot Clark.

Berry Accius, a community activist, says although they're entering into the third week of protests, he's in marathon mode and  expects to hear from the region's top prosecutor.

The group marched from the DA's office to City Hall, where the crowd was smaller than during last week's community forum. Rows of chairs and video screens were set up outside for overflow audiences to sit and watch the meeting, but most chairs were left empty.

Justis Lang was one of the demonstrators. "I think, maybe people are pacing themselves because they know it's going to be a long fight. It's a movement, not a moment so ... you gotta bring water!" he said.

Lang believes people may be saving their energy for Wednesday's National Day of Action, held on the 50th anniversary of Dr. Martin Luther King Jr's assassination. The local Black Lives Matter chapter is scheduled to hold a protest outside the DA's office again.

Reports from City Hall is that there is a much smaller turnout that last Tuesday, when hundreds converged on a public forum to speak out about the Stephon Clark shooting.

Officials were expecting a larger turnout, and there were several changes at City Hall for tonight’s community forum, including chairs and video screens in the plaza outside and a lot more police and security. Most of those chairs are empty.

City spokeswoman Linda Tucker said that they “we’re putting some limits on where the crowd can go so we can have a safer environment,” she said.

“We had so much media interest last week, so we decided we need to more clearly define the areas where they need to be, for the safety and security of all.”

Oh, and there are new rules for media, which you can check out below:

It's an actual pen, like where you'd send photographers for "time out" https://t.co/yUzEkgP05N

Demonstrators are out front of the District Attorney’s office for the second straight week, demanding that criminal charges be filed against the officers who shot Stephon Clark on March 18.

Berry Accius, an activist who works with young black people as part of his Voices of the Youth group, responded to conversations that demonstrators need to wrap up their efforts and let the city return to normalcy.

“Why should we wind down when police are still killing folks?” he asked. “Why should we make anyone comfortable when we’re not comfortable. We’re inconvenienced every day. Nobody wants to come out here every day and try to fight for what’s right.”

Demonstrations against the shooting of Stephon Clark have entered their third week, and activists are gathering Tuesday afternoon in downtown Sacramento to continue protests.

Correction: An earlier version of this story referred to a gender-neutral person as "young man." We've updated the reference to that individual.

Correction: An earlier version of this story misidentified speaker Stacy Dawson. It has been corrected.