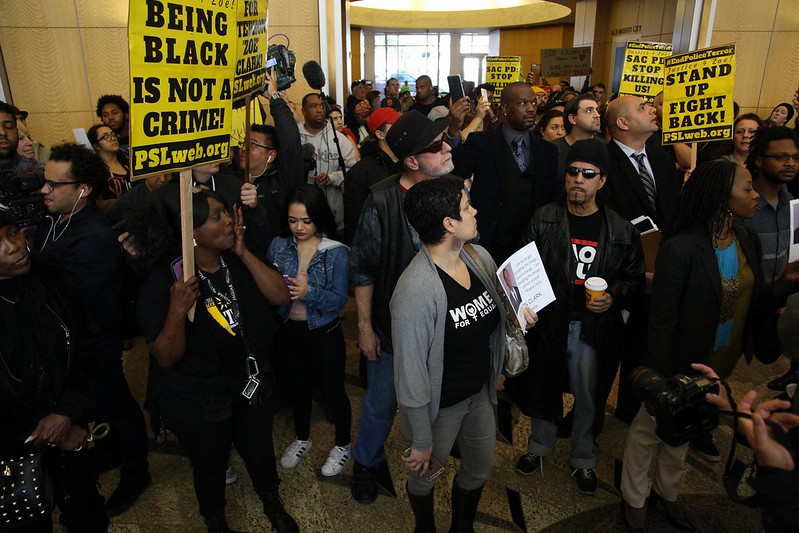 Slideshow of activists protesting the shooting of Stephon Clark. Hundreds of demonstrators moved from City Hall to shut down Interstate 5 before blocking entrance to a Kings game before tip-off.   Andrew Nixon / Capital Public Radio

Activists — led by the local Black Lives Matter chapter and clergy groups — converged on City Hall to protest the shooting. Hundreds of demonstrators later spilled into downtown’s streets, where they marched onto the Interstate 5 freeway, which was briefly shut down in both directions during the evening commute.

The protest eventually headed to the new downtown Kings arena, where dozens of people locked hands outside the Golden 1 Center. The team turned away thousands of fans as protesters congregated at the entrance.

A Protest in Photos: See more images from Thursday's demonstrations.

Linda Cantarutti was among the crowd in front of the arena. In 2015, a Sacramento police officer shot her son four times — including a direct hit in the chest — near Cesar Chavez Park. Her son survived the shooting — but Clark’s death prompted her to join protesters.

“It’s too hard, it took me back to my own son’s shooting,” she said of why she couldn’t watch police footage of the incident, which the department released on Wednesday.

“They should be charged, just like anyone else,” she said. “Just because they’re cops does not let them stand above the law.”

Mone’t Ha-Sidi, founder of local group Black Arts Matter, helped block fans from entering the Kings game. She hopes that the protests, which made national headlines, had an impact.

“I feel that our message was heard,” she said, adding that it was “interesting” to see Kings fans “more upset about missing a losing basketball team play a game than they were concerned about the loss of a life in their own community.” 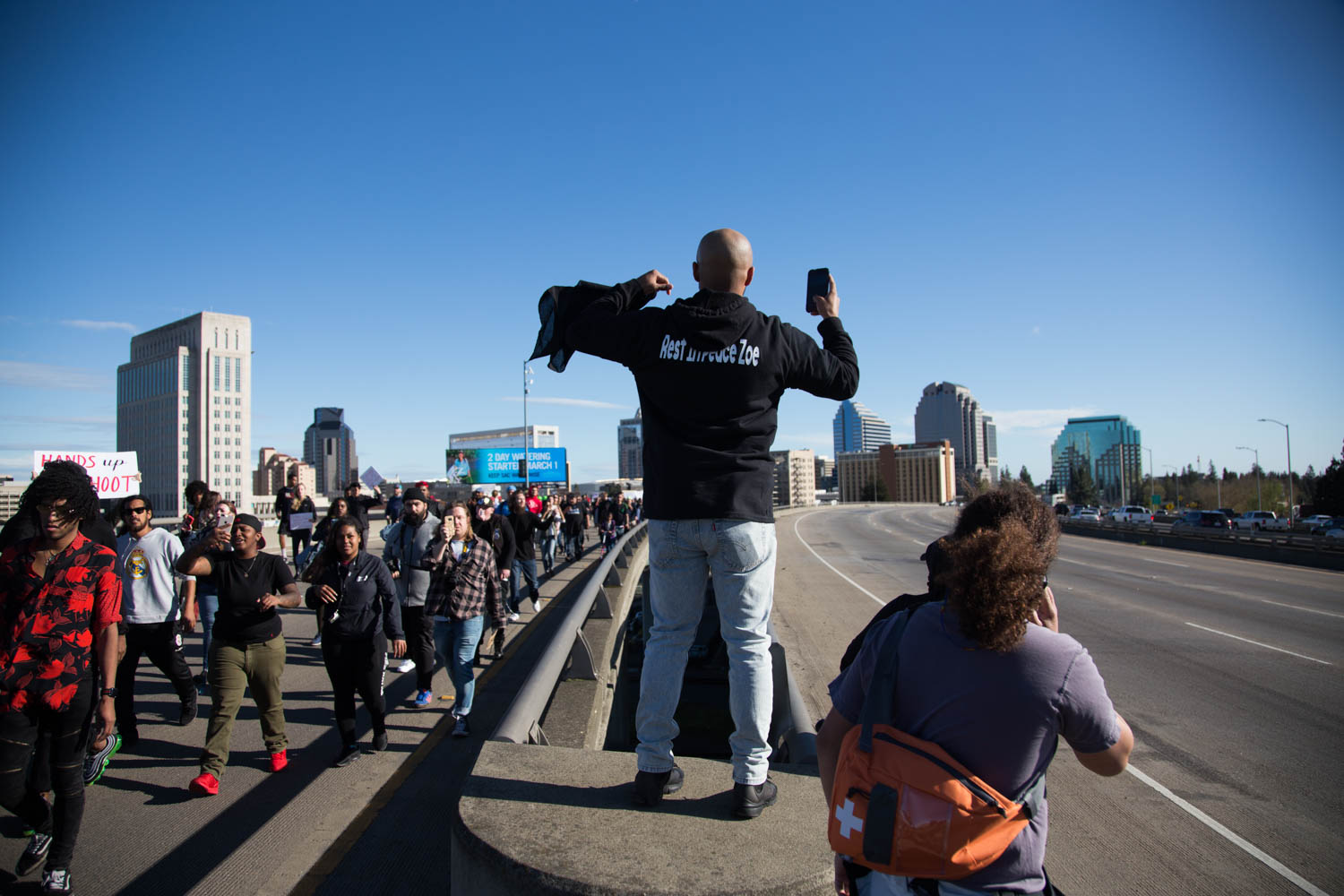 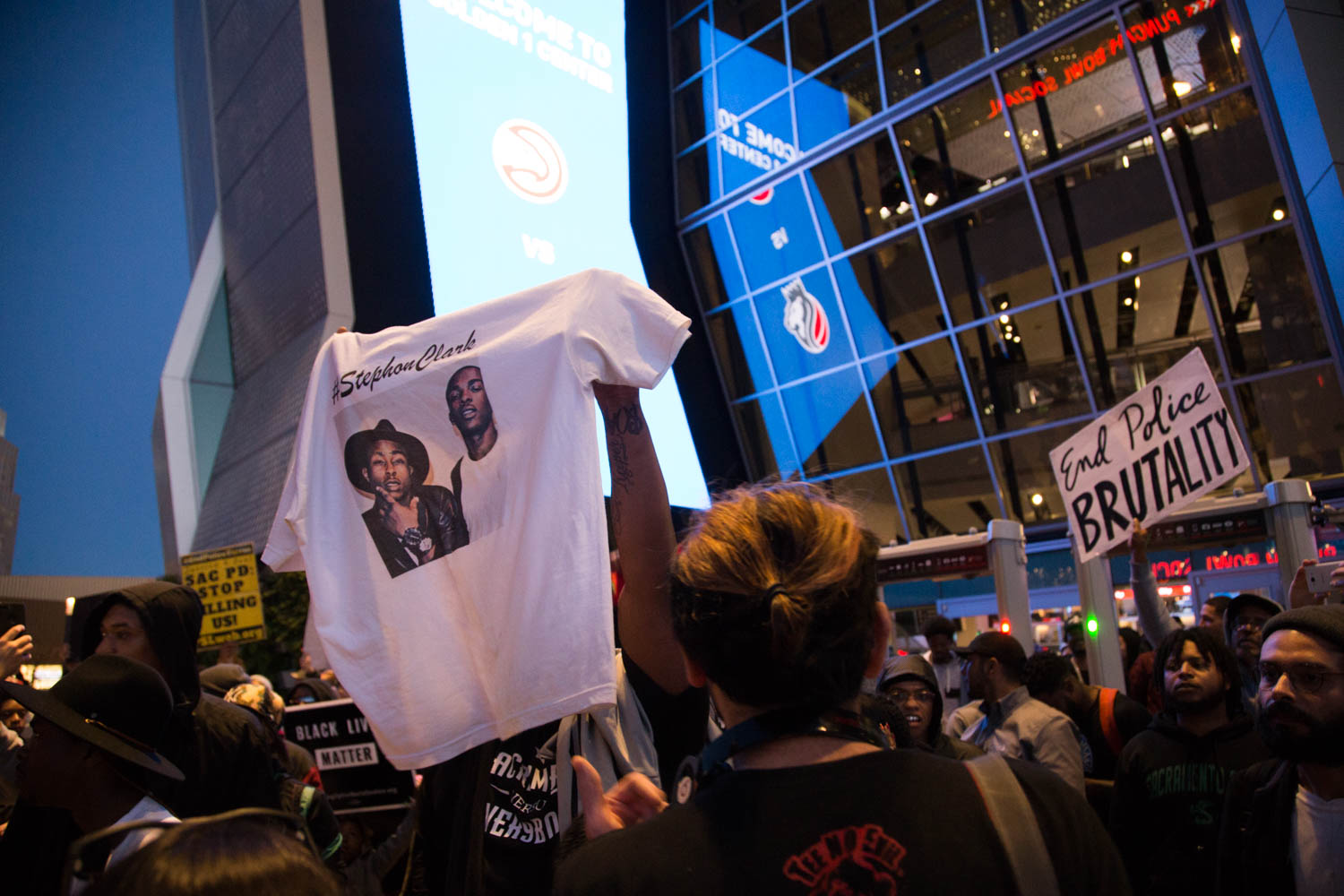 Thursday's protests gripped the city and came a day after police released videos depicting the moments that led up to Clark’s death.

Body-camera footage from two officers shows the cops pursuing Clark, 22, into his grandparents' South Sacramento backyard. In a matter of seconds, the officers round the corner of the house, spot Clark, then yell "Show me your hands! Gun! Gun! Gun!" Immediately after, they fire 20 shots in his direction, killing him at 9:26 p.m.

A statement from the Sacramento Police Department says that, prior to the shooting, Clark was facing the officers then advanced “forward with his arms extended” toward the while “holding an object in his hands,” which they believed was a gun.

No firearm was discovered at the scene. “The only items found near the suspect was a cell phone,” the department said.

Video from a Sacramento County Sheriff’s Department helicopter shows Clark jumping over a fence of a neighboring home into his grandparents’ side yard moments before he was shot.

Law enforcement arrived on the scene this past Sunday night at 9:13 p.m. A 911 caller reported a man in a black hooded sweatshirt breaking car windows in the neighborhood.

Sacramento Police Chief Daniel Hahn told The Sacramento Bee on Thursday that he thinks the man breaking windows was Clark, but that he could not factually confirm it was him.

At City Hall during Thursday’s protest, activists chanted “a phone is not a gun” and demanded that Hahn and Mayor Darrell Steinberg show their faces to the crowd.

Protestors fill the lobby of Sacramento City Hall chanting messages like “No Justice no peace” and “it’s a phone not a fun.” #BlackLivesMatter sacramento pic.twitter.com/wgifS4PnMu

“I have four grand babies that are black. I don’t want them to be next,” explained protester Tami Collins, who held a sign that read “Justice for Zoe,” a reference to Clark’s middle name.

Kristina Flores said she came to the protest because her family is black. “I fear every day, every time any of us walk out the door. It could have easily been my brother who was shot,” she said.

Veronica Curry has two adult sons. “I’m here protesting for them. I raised my kids in the community where Stephon was killed. I’m afraid every day that this could happen to them,” she said.

A police department spokesperson told Capital Public Radio there were no arrests or property damage during the protests. Officers used “pepper balls” — small, non-lethal spheres that resemble paint gun — and batons to stop protesters who tried to sneak into the Kings arena through an employee entrance.

“We want to help facilitate this protest and for it to remain peaceful,” a spokesman said.

Civil rights attorney Ben Crump, who previously represented the families of Trayvon Martin and Michael Brown, would not confirm whether he is representing the Clark family, but said in a statement that “the shooting death of Stephon Clark is an all-too-common tragedy. It is yet another troubling example of a young, unarmed black man being shot by police under highly questionable circumstances.”

The family claims that officers did not tell them Clark was dead in their backyard for nearly four hours after the shooting. The victim’s grandmother, Sequita Thompson, was inside her home when the shots were fired on Sunday. According to family member Sonia Lewis, who showed up at the home later that night, Thompson finally opened the back door’s curtain around 1:30 a.m. and saw “her grandson laying on the ground and a few officers out there ... and she's just screaming and hollering.”

Before Steinberg’s press conference on Thursday, he issued a statement on Wednesday night stating that he had viewed the police footage of the shooting, but that he would not "second-guess" the officers' "split-second decisions."

“I don’t want to second-guess the officers, either,” Sacramento Councilman Larry Carr said in an interview Thursday morning on Insight with Beth Ruyak. “What I want to find out is whether or not we were acting in accordance with policy.”

Barry Accius, who attended Thursday’s march and protest, called the mayor’s remarks “a slap in the face to the black community.”

At Thursday’s press conference, Steinberg tried to walk back his comments about second-guessing the officers, saying that those were not the most "artful" words.

"I want to stay clear of commenting on what could affect the investigations," he said at the press conference. "Emotions are high. I understand it. I urge our community to remain peaceful and try to be extra kind to each other."

Accius, who runs a Sacramento group that works with black youth, called the police footage “shocking, sickening and disappointing.” He said that how city officials and law enforcement respond to Clark’s death will be a “moment of truth” for the city and its black community.

“What we feel is deserving is that the police officers are arrested and charged,” he said.

Capital Public Radio reached out to the Sacramento Police Officers Association, the union that represents local law enforcement, to discuss the Clark shooting but did not receive a response.

The Greater Sacramento NAACP president Betty Williams said in a statement that it is demanding regular updates from the police department. Williams was scheduled to meet with police chief Hahn on Thursday. The NAACP is requesting that the FBI “get involved” in the investigation into the shooting.

Sacramento civil-rights attorney Stewart Katz, who has work on several officer-involved-shooting cases, reviewed the video several times and questioned why the officers thought Clark was in possession of a gun. He said their judgment raises issues regarding police training. “And the question is, of course, in part, you have to ask yourself, ‘What’s the basis for this misperception” that Clark was holding a firearm, Katz asked.

The two officers involved in the shooting are on paid administrative leave pending internal and district-attorney investigations. The department has declined to reveal the officers’ names, and Steinberg said on Thursday that he was "not at liberty" to release them, either.

The mayor said the city will be looking at training procedures for police, including how officers use de-escalation tactics, and what the protocols exist for use of force. Council will take up issues related to the shooting during a meeting in April.

After Thursday night’s Kings game, majority owner Vivek Ranadivé spoke to the crowd of approximately 2,000 fans. “On Sunday, we had a horrific, horrific tragedy in our community,” he said. “We recognize that it’s not just business as usual, and we are going to work really hard to bring everyone together to make the world a better place, starting with our own community. And we’re going to work really hard from preventing this kind of tragedy from happening again.”

A vigil is scheduled for Friday night at 7 p.m. near the home of Clark’s grandparents.