Sacramento Trying Not To Leave Low-Income Drivers Behind In Push For 70,000 More Electric Vehicles

Susan Brown lost access to her car last year. So, when two electric vehicles appeared at her low-income senior living complex in downtown Sacramento, she was all ears.

“Let me just say that God loves me, because it was perfect,” Brown said.

The two four-door Kia Sol EVs are part of the Sacramento Metropolitan Air Quality Management District’s free car-share program. Brown said she can now go anywhere she wants, so long as it’s within a limit of three hours to keep the cars available for others.

“I don’t get depressed because I know that I have freedom,” she said.

But not everyone’s as lucky: There are only four sites with two cars each under the program. And, in general, widespread access to electric vehicles is uncommon in Sacramento. For instance, the city runs a charging program in parking structures downtown. It’s mostly utilized by those who earn $75,000 or more annually. 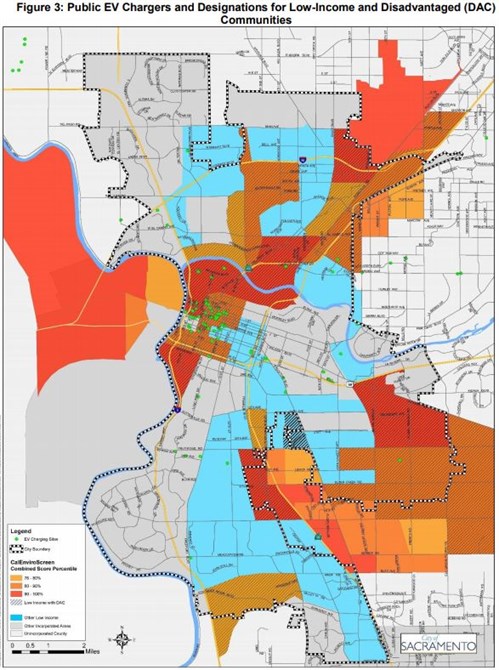 Almost 50 percent of households earn less than 80 percent of the median income in the Sacramento area. These populations have some of the most challenges with transportation. This map outlines where existing charging stations (green dots) are compared to where disadvantaged communities are in the region. Click on the image above to view Sacramento's 2017 Electric Vehicle Strategy.  Sacramento 2017 EV Strategy

That could change under Sacramento’s new electric vehicle strategy, which city council passed last December. It calls for 75,000 new zero-emission vehicles, or ZEVs, and 2,200 chargers across the city in the next seven years. That’s huge growth from the 3,200 ZEVs and around 500 chargers in the city today.

Those numbers are Sacramento’s local contribution to the governor’s goal of 1.5 million ZEVs on California roads by 2025, and which would expand to 5 million by 2030.

But is the level of growth in Sacramento feasible in just seven years?

Steffani Charkiewicz leads the region’s electric car-share program. She said the vehicles are almost always checked out, but it didn’t start that way.

“There was a lot of work that went into it that we did not expect,” Charkiewicz said. “To convince them to go through the sign-up process and then to use the vehicle.”

She said the program, which connects people to ZEVs via the Sacramento Regional Housing Authority, could be ramped up, but it’s just a matter of finding long-term funding.

Jennifer Venema, Sacramento’s sustainability manager, says even though the city is excited about expansion there are issues, such as not having enough users. “Even with the grant funding and the offer of free-membership there has still been a struggle to hit the targets,” Venema said.

A company called Electrify America wants to clear that hurdle. Courts are requiring the subsidiary of Volkswagen to fund $44 million in electric vehicle investments in Sacramento. Richard Steinberg, in marketing and communications for Electrify America, says roughly 35 percent of that is going toward low-income communities.

“Typical electric vehicle buyers today are more affluent,” he said. “This was a really concerted effort that we should focus on improving access and improving awareness.”

Electrify America’s plan is to split about 1,000 ZEVs between two car-share programs. The group is also looking at an electric transit system and electric ride-hailing. Also, an expanded scrap and save program for zero-emission vehicles is in the process of being ramped up statewide. But even with beefed-up programs, getting low-income residents on board could prove difficult.

“Often, we don’t address the issues within the diverse communities until later,” said Julian Canete with the California Hispanic Chambers of Commerce.

He says that’s a problem, because half of the households in Sacramento earn less than 80 percent of the median income for the region. “They’re behind the curve,” he said. “We just have to see more of them in disadvantaged communities, so they are on the same learning curve as everybody else.”

Canete says it’s going to take a wide-scale, targeted effort to change the mentality that ZEVs aren’t for people of color. He uses the example of the popularity of trucks in the Latino community as an example.

“They [manufacturers] do a great job when they want to sell a Chevy truck to Latinos, because that’s, like, the No. 1 truck they buy,” Canete said. “There has to be more diversity within their marketing campaigns.” 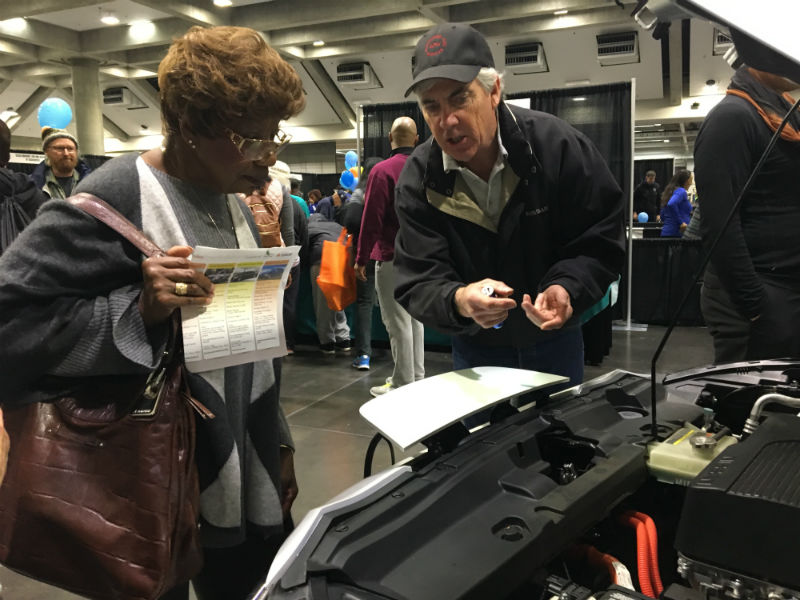 Simeon Grant, with the youth outreach group GreenTech, says to successfully reach low-income communities of color with the message that ZEVs are for them will take education and direct exposure.

“The best educators have them get inside, see it and feel it,” Grant said. “As opposed to just talking about it.”

Grant brought the Sacramento Electric Vehicle Association to this year’s Martin Luther King Jr. Diversity Expo in downtown Sacramento. They showcased a Tesla, a Nissan Leaf and others.

Local resident Mai-Gemu Johnson had a lot of questions about the cars. Johnson owns a pickup and is hesitant about buying a ZEV because of the lack of charging infrastructure in the city and the cost of getting into one.

What will get him into an electric car? He says it all comes down to cost and getting his bills paid off.

It’s a reality that groups implementing the plan will have to figure out: how to make zero-emission vehicle use as affordable as possible for all income levels.