In Butte County, homelessness advocate Lisa Currier sees severely mentally ill people on a daily basis. Through her nonprofit Crisis Care Advocacy and Triage, she tries to connect people with doctor’s appointments and other resources.

She usually starts by taking them to the Butte County behavioral health clinic, but appointments there have about a monthlong waitlist. She said people who don’t qualify for county care end up driving 30 to 90 minutes for appointments.

“It depends on the city you live in, the amount of therapists or qualified people who can actually  give medication,” she said. “It’s very difficult.”

A new report from UC San Francisco backs up what Currier is seeing on the ground. Researchers found that, if current trends continue, there will be 41 percent fewer psychiatrists than needed in California by 2028.

Janet Coffman, an associate professor of health policy at UCSF and a lead author on the study, said it’s a supply and demand problem.

“The data we have suggests that we’re not going to have enough new psychiatrists and psychologists graduating and coming into the state to practice to replace everybody who will retire,” she said. “California’s population is projected to grow, so even just assuming current rates of mental illness and substance use disorders, we’re going to need more providers.” 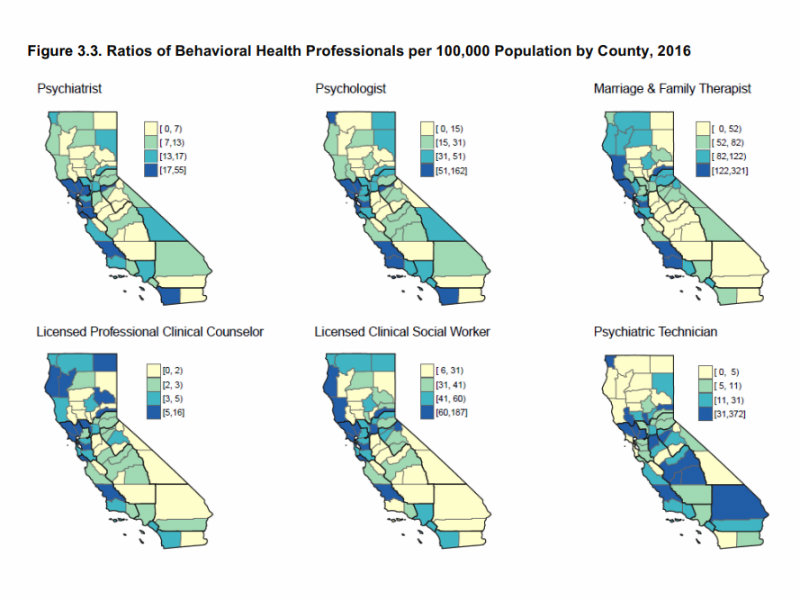 This map compares the number of patients to mental health professionals by county. The San Joaquin Valley and Inland Empire have some of the worst ratios. Click to view the full-size map and report. Healthforce Center at the University of California, San Francisco / Courtesy

Researchers found that there are no psychiatric residencies north of Sacramento, and no doctoral psychology programs in the San Joaquin Valley.

Coffman said loan repayment programs for medical students who go on to practice in underserved counties are helping to incentivize doctors to these areas.

There’s also potential to better utilize the existing workforce, she said. Psychiatric mental health nurse practitioners have prescribing authority in California, but they don’t practice independently. A change to their scope of practice would require legislation.

“Out in rural areas where it may not be cost-effective to employ both a psychiatrist and a psychiatric mental health nurse practitioner, you might not be able to use [them],” she said. “That limits our ability to utilize (them) in ways that would be helpful to the mental health system.”

The report also found that there aren’t enough Latino and African-American psychiatrists and psychologists relative to those patient populations in California.

As it stands, only 37 percent of adults in California who have a mental illness received treatment within the past year, according to a 2011 to 2015 report from the Substance Abuse and Mental Health Services Administration.

Currier said she’s seen people spiral into crisis because they made a mistake with their medication and weren’t able to get back in touch with a doctor. Some people stop taking their meds altogether.

“The inability to manage their medications and their mental health, as well as getting back in to see somebody … some people really don’t understand what medications do to enhance someone’s success rate,” Currier said.

Roughly 1 in 6 California adults experience mental illness, and threats of deportation, recurring mass violence and financial downturn may be increasing the need.

The report was funded by the California Health Care Foundation. The foundation is also a funder for our healthcare reporting.