Jacob Katz, with California Trout, says growing bugs in rice fields could be part of the solution for boosting salmon populations in rivers statewide.

Jacob Katz is on the hunt — but not for geese or ducks. On a farm about 40 minutes north of Sacramento, he wades through a rice paddy with an aquarium net in hand. But he’s not fishing.

The senior scientist for California Trout, a conservation group with a focus on protecting wild fish, is at River Garden Farms. Founded in 1913, they typically grow things like corn, wheat, and around 5,000 acres of rice — the kind local sushi rice restaurants use.

But today, he’s working on a pilot project with UC Davis to create what they call “floodplain fatties” — a nickname for the well-fed baby salmon and smelt who will eat his bugs while swimming through the Sacramento River.

“Dip this net into the water and it just comes out literally full of bugs,” says Katz, adding that they are mostly cladocerans, but that he calls them “water fleas.”

“These little bugs are floating fillet for salmon that’ll be in the river.”

The reason he’s doing this? Young chinook salmon and other fish need help. Much of the water they require to survive is stored in dams or diverted through thousands of miles of levees. Before this happened, floodplains in the Central Valley supported large populations of fish. The project to grow bugs for the fish is in year two and the end goal is to improve the likelihood that salmon survive the trek to the ocean and back.

“What farmers are doing is reconnecting that floodplain natural wealth to the river system where it’s needed,” Katz says. “More fish equals a win-win for everybody. It means we have a system that works for people and for the environment.”

The project is called the Fish Food on Floodplain Farm Fields Project. It’s part of a greater effort to restore threatened fish species — the Sacramento Valley Salmon Recovery Program. The project comes at a key time: A recent UC Davis study suggests that winter run chinook salmon could go extinct if efforts to recover the species aren’t taken up. The latest population count is less than 2,000. In the 1970s there were more than 25,000.

The project starts with rice paddies, says River Garden Farms general manager Roger Cornwell. He’s used to flooding fields during the off-season, to provide a rest-stop for millions of birds along the Pacific Flyway. Now, instead of just letting the water soak into the earth, he’s made a change that mimics the natural floodplain of the Sacramento River.

“We’re creating fish food,” Cornwell says. “It’s very simple. We just pump the water in. Let it slow down and it starts to breakdown the carbon that is there. It creates algae, algae create bugs and then we pump that right back to the river to feed the fish.” 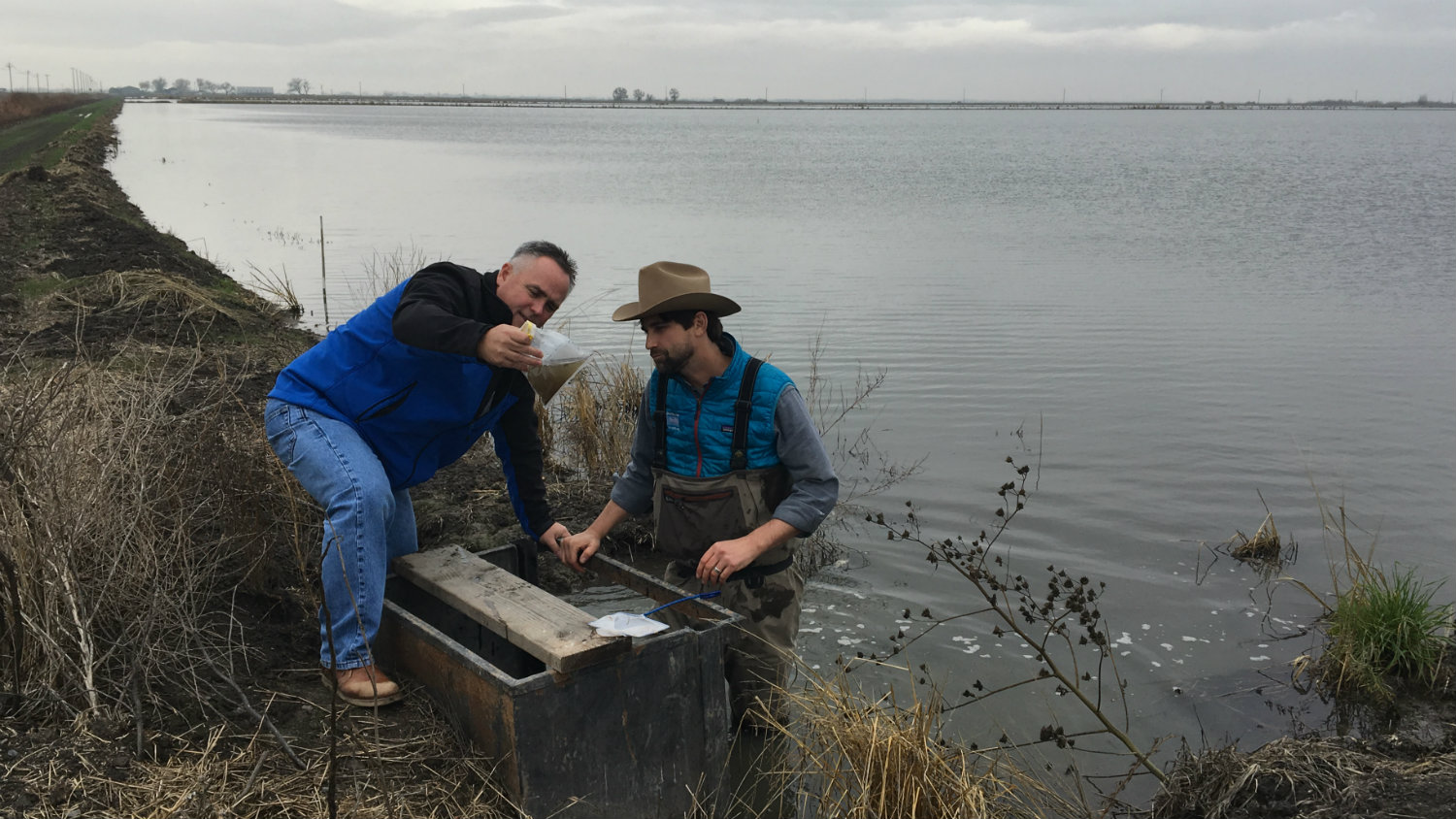 (Top) Roger Cornwell, with River Garden Farms, spends about $45 per acre on the bug growing pilot project. He says the minimal cost is worth it to sustain bird and fish populations along the Sacramento River. (Left) All sorts of bugs grow in rice fields, but Jacob Katz, with California Trout, says “water fleas” (cladocera) are like floating fillet for fish in rivers. (Right) “Floodplain fatties” is a nickname for the well-fed baby salmon and smelt who will eat bugs farmed in the rice fields while swimming through the Sacramento River. Ezra David Romero / Capital Public Radio

So far 12 farmers are growing bugs on about 50,000 acres in the Sacramento area. That’s about 70 pounds of bugs per acre.

The group is figuring out the details about exactly how to get that fish food back into the river on a large-scale. They hope to ramp up the project with as many rice farms as possible in the future — there are more than 500,000 acres of managed floodplains in the Sacramento Valley alone.

Still, Cornwell says kinks still need working out. “I think for the farmer it's more of how effectively can we get food to the fish,” he says. “We’ve got to have all the processes figured out to make it easy for everyone to implement,” such as resolving complications with irrigation pumps and canals.

Carson Jeffres — an aquatic biologist with UC Davis — and Katz published a study last year that suggests that, when farmers and conservationists work together, there could be more fish in California Rivers. He thinks projects like this could help eliminate the popular farms versus fish argument.

“As opposed to standing with our heads in the sand, this is getting us to a place where we can have real impact and change over time,” says Jeffres, who added that the project could be implemented on other rivers like the San Joaquin in the future. 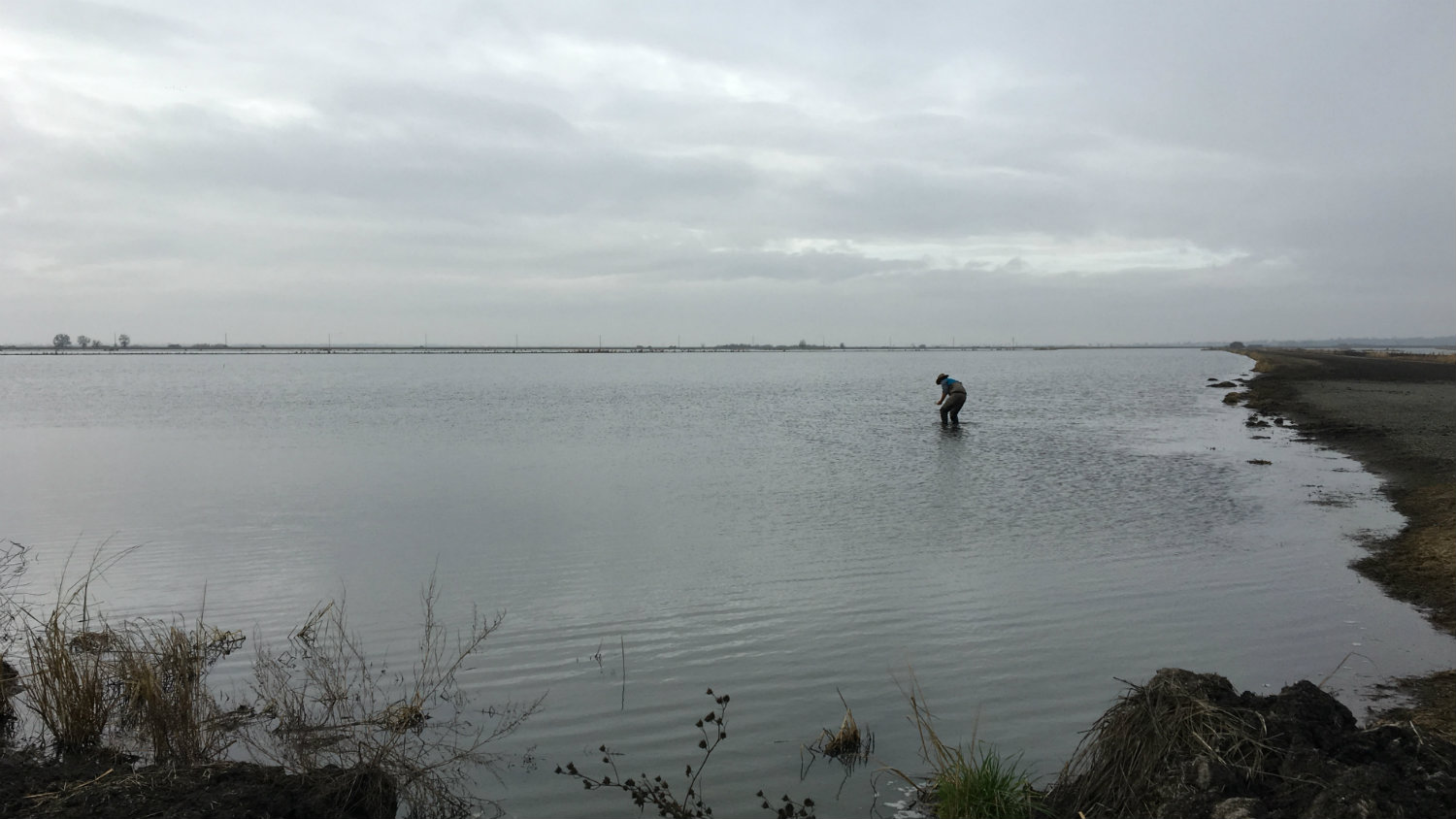 The hope of the project is to have even more farmers on board. There are around 500,000 acres of managed floodplain in the Sacramento Valley alone. Jacob Katz, with California Trout, says more bugs means fatter fish, and fatter fish have a stronger likelihood of surviving the trek to sea and back. Ezra David Romero / Capital Public Radio

Back on the rice farm, Cornwell prepares to release the bug rich water back into the Sacramento River through a system of pumps and canals. “This water’s been out here for right at three weeks right now,” he says.

For Cornwell, who’s farmed in the region for more than a decade, this science-farm partnership costs him about $45 per acre.

“We’re stepping out of our comfort zone,” he says. “As this grows people will see what we are doing, and we will start developing trust among neighbors and then this program is just going to take off on its own.”

He says the minimal cost is worth it to save fish and to make sure the acreage is around for future generations.