The California Highway Patrol prides itself on training. To become an officer, a CHP cadet must complete 1,300 hours of training at the department’s academy in West Sacramento, and another 600 at their field offices once assigned.

On a typical day, cadets are on the “skid pan,” which is a highly polished area of concrete with nozzles shooting water to keep it slippery.

There is also the high speed driving course, which resembles a Formula One race track; the field enforcement simulator; the gun range and the parallel parking course.

The latter is the smallest of the bunch, consisting of several orange cones, in place of a curb, and the front and rear bumpers of two vehicles. During a recent exercise, two cadets in a Ford Explorer listen to orders from their instructor, Officer Dallas Whedbee.

“All right, so, you’re gonna back straight up so that that rear door handle, the pivot point of the vehicle is past that last delineator,” Whedbee tells one of the cadets. “Once you can see that happen in your mirror, come to a stop.”

The cadet listens — and then backs over the cones. Whedbee has him pull forward and try again. 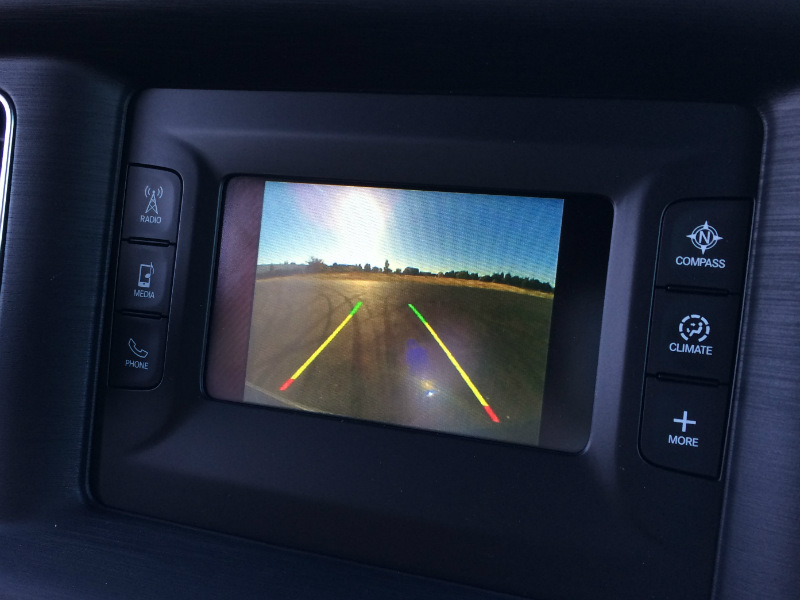 Back-up cameras are now standard in all CHP vehicles. A bus driver was killed by an officer backing up near Truckee in April 2017.  Bob Moffitt / Capital Public Radio

There is an emphasis on backing at three of the academy's courses and for good reason: from 2013 to 2016, the total number of crashes involving CHP officers and employees increased by 23 percent, even as the annual number of miles driven has only went up by 2 percent. The number of at-fault collisions are up by one-third.

Backing into things was the No. 1 cause of at-fault collisions. There were more than 350 of these incidents between 2013 and 2016.

A factor in this increase is the department’s choice of vehicle: the Ford Explorer. When the department began to replace the discontinued fleet of Ford Crown Victorias, it chose the Explorer (called the Interceptor by police agencies).

But with the change came a storage challenge; the Crown Victoria had a trunk, but the Explorer does not. To store road flares, tape measures, hand wipes, spray paint, and alcohol-screening devices, the department installed a chest of drawers in the back of each Explorer unit. 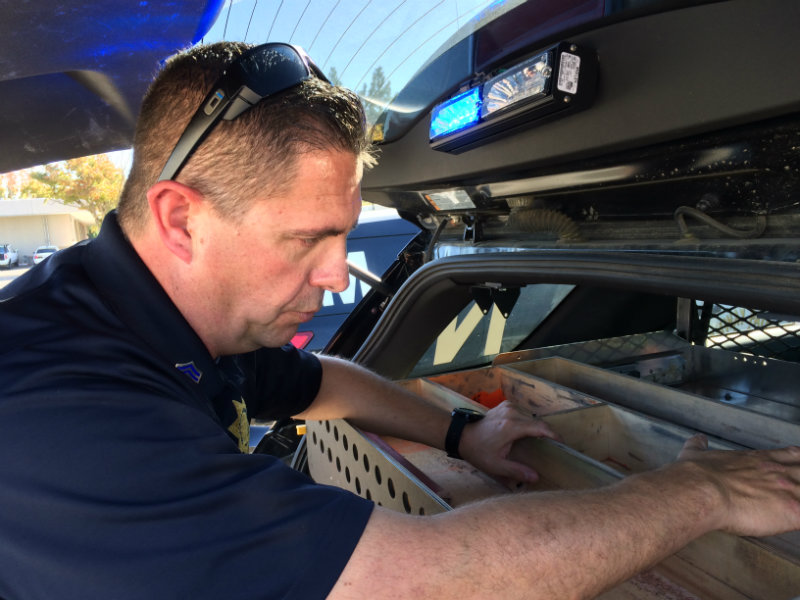 CHP Sgt. and training supervisor Jay Adams pulls out a storage cabinet drawer from the back of a department training vehicle. Ford Explorers in the field would have even less visibility due to the cabinets being full of equipment.  Bob Moffitt / Capital Public Radio

He says there’s also a piece of thick, wire mesh that runs from one side of the vehicle to the other in between the front and back seat. "That cage, that screen you see, is to keep items from coming up front if we’re in a collision or if we’re on the brakes really hard. That’s all that’s for. It’s not for prisoner transport,” Adams says.

But it’s not for visibility, either: An officer’s vision is cut in half because of the setup.

Adams says cadets and officers are trained to physically check the area behind a vehicle before backing up, and to use their mirrors, adding that “all the vehicles on the road now have a back-up camera."

According to Adams, there is a trick to backing at high speeds. During an exercise, he says you have to focus on items in the distance: “I’m actually looking at the those trees way back there and that’s what I want to focus on. If I focus on anything closer any closer, and I’m gonna start moving the steering and we don’t want that.”

Travis Black’s client was in one of those collisions in June 2016.

The attorney says that his client was in his car, attempting to follow a pick-up truck out of a crowded shopping center and across two lanes of traffic.

Black has a copy of surveilance camera footage of the crash. He acquired it from a business near the site of the collision. He provides a play-by-play of the seconds leading up to the crash. “Traffic is slowing down. They allowed the truck to go through. You’ll see a Highway Patrol Car going from left to right, and hits my client’s vehicle,” he says. 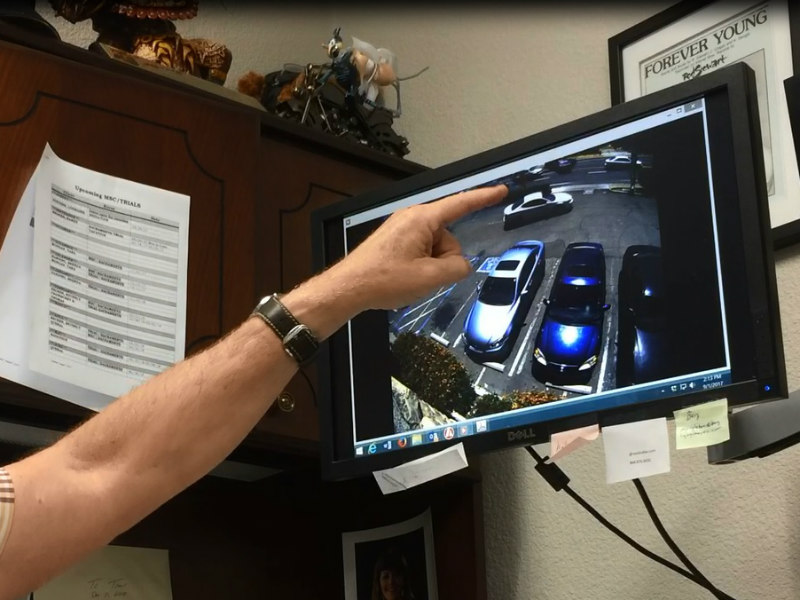 Attorney Travis Black shows where a collision occurred between his client and a CHP officer in 2016.  Bob Moffitt / Capital Public Radio

The attorney says the officer was speeding and had not activated his emergency lights, or “his Christmas tree,” as Black calls it. “Red lights, blue lights and sirens. You have to have both of those,” he says. “What you can see here is he only has a yellow flashing light in the rear of the vehicle. In fact, you can’t see it in this video.”

To be fair, it appears the trooper’s vehicle scrapes along the front of his client’s car. Both men in the collision claim injuries and the case is still being litigated.

Of the 1,446 collisions from 2013-16, only 81 involved a motorcycle patrol officer. Almost all of the crashes involved officers. The discipline varied.

About one-third were disciplined with verbal counseling or a monthly evaluation. More than three-fifths were given a more serious penalty, called a “Memorandum of Direction” or MOD; these are cases of poor performance or misconduct.

The most serious punishment is called an “adverse action.” It includes a formal written reprimand, salary reduction, suspension, involuntary transfer, demotion, or termination. Thirteen employees — all officers — were disciplined this way.

In 70 cases, no action was taken. In 62 cases, the discipline is unknown; it was not included in the department’s response to our California Public Records Act requests.

And that raises the question: How does headquarters monitor officers and ensure that they are held accountable?

It turns out, CHP headquarters does neither of those things.

“That’s several levels removed from where we are,” says Jill Dolce, a captain in the CHP Office of Risk Management. She says discipline is handled at the local level, at one of the CHP divisions throughout the state.

She also explains that risk management employees review annual statistics.“If we can identify that there have been this many collisions in this particular area, we can make a recommendation, and then the area commander would probably work with through his lieutenant and sergeants to make sure we have updated training,” she says.

Employees' files are kept at the field office level. Headquarters does not review them.

Documents related to disciplinary action are required by statute to be removed from an employee's folder after three years.

According to Dolce, to retain such records on a local level could prevent an employee from advancing.

“What purpose does it serve? I believe the department’s attitude is if you’ve received some sort of corrective action and you’ve served whatever punishment is associated with that, then, after three years that gets removed from your personnel folder and you start with a clean slate,” she says.

Dolce attributes the increase in CHP-involved collisions in recent years to people colliding with officers more frequently. “A drunk running into us counts as a collision. But, it’s not our fault."

To underscore her point, investigators say an intoxicated driver struck and killed Officer Andrew Camilleri on Christmas Eve last year, while he was stopped along Interstate 880 in Hayward.

"That is the cost of doing business,” Dolce says. “There are collisions that are going to happen.”