Sacramento’s Capital Stage is presenting a recently-written romantic comedy that is set in a well-appointed English home in the early 1800s. Fans of novelist Jane Austen will be particularly interested in seeing this play, titled “Miss Bennet: Christmas at Pemberly.”

Each year in December, American audiences seem to get a hankering for plays set in 19th Century England, with ladies wearing beautiful long dresses, and men with mutton chop sideburns.

Theater companies usually respond with a familiar tale by Charles Dickens. You know, the one about the guy who says “Bah, humbug.”

But Capital Stage in Sacramento has latched on to a novel new script – a comedy of manners about an awkward courtship that unfolds at Christmastime in 1815. 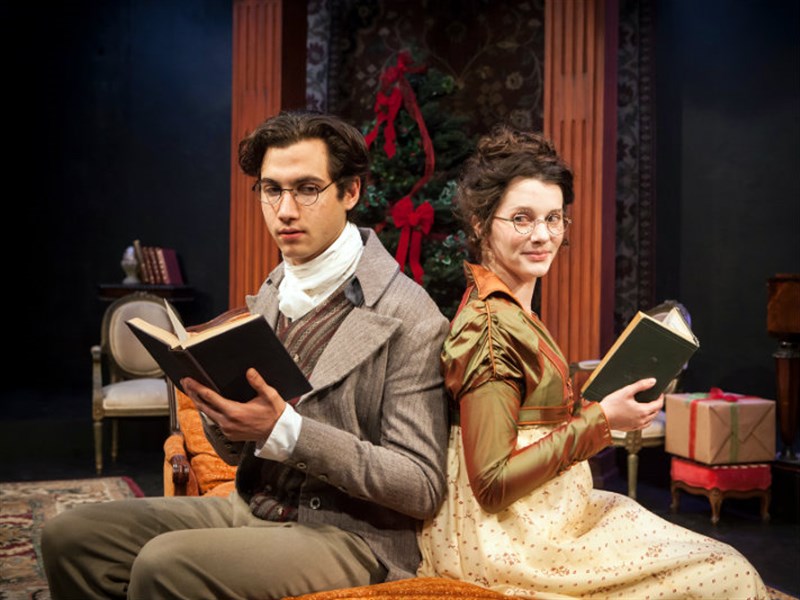 The characters come straight out of Jane Austen’s classic novel “Pride and Prejudice.” But this new sequel follows the classic pattern of romantic comedy, which begins with a handsome and available young man and a beautiful and available young woman meeting entirely by chance, in this case while flipping through the large pages of a beautifully printed atlas of the world.

Mary: Last night, I left off in Australia… And you seem to have set me in Brazil, and I’m quite unprepared for the Amazon.

Arthur: Oh well watch out for the fish. They bite.

Arthur: Though I’ve only known you for a day, I must confess, it is enough to recognize your uncommon heart and mind…

Mary: After examining my growing fondness at time spent with you, I feel compelled to exhibit a thought that you are the first person I have come to know that shares my interests…

Arthur: I have no skill for words, but I hope nonetheless to convey my regard for you, and your fine hair…

One of those love letters ends up in the wrong hands, and soon there’s a stormy argument. Every romantic comedy has to have a proper “boy loses girl” episode.

Arthur: I can explain. Miss Bennet, there has been a terrible misunderstanding.

Mary: I understand you have a fiancé. Is that true.

Arthur: Yes, it seems so.

Mary: Then there is nothing left to say, not to me, not ever.

I won’t give away the ending, but let’s just say that before the play is done, the young lovers are burbling and making pledges in flowery language.

Arthur: How you have shaken me irrepressibly, and if I may dare to say so, I hope you will continue to do so for as long as I live. 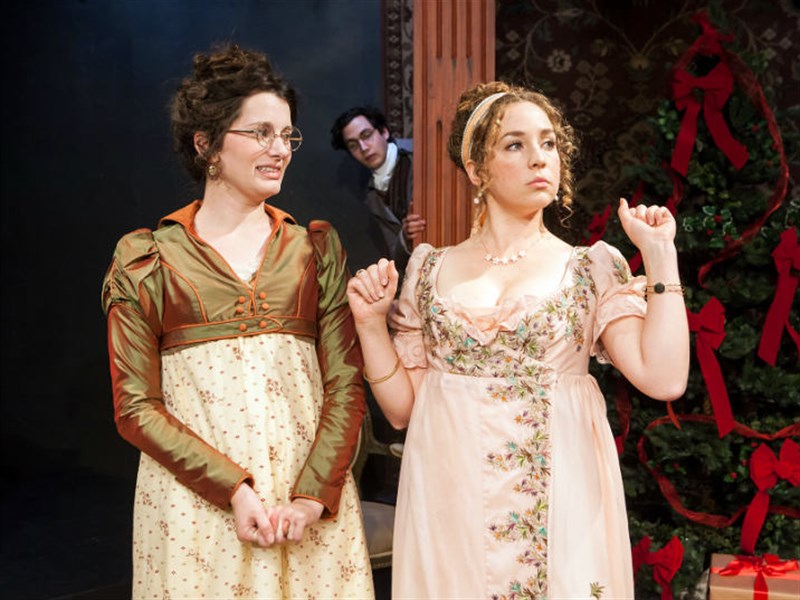 Two talkative people with nerdy intellects passing love letters and making fools out of themselves has been good box office since Shakespeare wrote “Much Ado About Nothing” in 1612, some 200 years before Jane Austen wrote “Pride and Prejudice” in 1813.

Now its 2017, and folks still break into smiles and sigh appreciatively when the lovers in this play finally share a kiss.

In addition to the good chemistry between leading actors Elyse Sharp and Aaron Kitchin, this show also features several very capable supporting performances. I particularly enjoyed Andrea Love as a hugely expectant lady who’s doing her level best to get through a holiday gathering during the awkward eighth month of pregnancy.

While this play is a sequel to “Pride and Prejudice,” you really don’t need to be familiar with that novel to enjoy this show. And it’s nice to have a cute new love story set in an old, familiar era as a well-staged and quite attractive entertainment option during the cold nights of December.

“Miss Bennet: Christmas at Pemberly” has been extended through Dec. 30 at Capital Stage in Sacramento.