The Myth Of The American Yam

At The Porch restaurant in Midtown, Sacramento, one of the most popular side dishes on the menu is Candied Yams. Back in the kitchen, sous chef Matt Sonzust reaches into a box, clearly labelled : “JUMBO GARNET YAMS.”

When asked why the menu title for this dish is “Candied Yams” instead of “Candied Sweet potatoes”, he says there’s a good reason.

“They come in a box that says yams, so we go with yams as opposed to sweet potatoes,” says Sonzust.

But the truth is, they’re not yams — and it’s very likely most Americans have never eaten a real yam. Real yams originated in and are now mostly commercially grown in Africa. 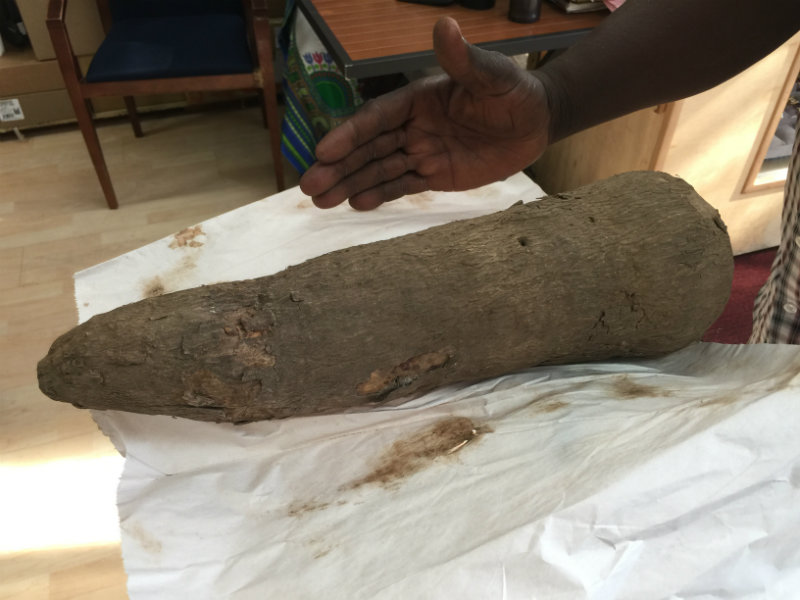 Everything produced and sold in the United States as a yam is really a sweet potato. The two aren’t even very closely related biologically (see a breakdown here).

For some people, the labeling confusion is a sore spot.

"Yams were my favorite food growing up, until I discovered that it was not the yam that I loved, it was the sweet potato," says UC Davis librarian JJ Harbster.

It’s bothered her for many years. As a researcher, this revelation inspired her to learn as much as she could, even authoring a piece for the Library of Congress on the issue.

"In my hunt for sweet potato history, I noticed that early on, we called it the potato," Harbster says.

That happened when sweet potatoes were first brought from the Americas to Europe by Columbus. Eventually, the word sweet was added to the term.

Centuries later in the U.S., people wanted to differentiate the two main types, soft orange flesh versus firm lighter flesh. So, this time they borrowed a word brought over by African slaves.

"They recognized that root, or the tuber, that looked very much like the yams they knew in Africa and they called them yams, and so the marketers, they just ran with it," says Harbster.

Harbster says African yams may look a bit like sweet potatoes, but genetically and in the kitchen, they're nothing alike.

"If you've ever had a real yam, they're very starchy. I think they're really coarse and watery. It is nothing like a sweet potato," says Harbster.

It’s this mis-marketing that California’s sweet potato industry is trying to quash.

Nearly all of the sweet potatoes commercially grown west of the Mississippi are farmed in the San Joaquin Valley, and most of those are found in Merced County.

California sweet potato growers are actively working to drop the marketing term “yam” from their packaging. The push is still in the early stages, so boxes and bags that say “yam” can still be widely found throughout the western half of the United States.

North Carolina growers are responsible for most of the East Coast’s sweetpotato supply, but they have no similar plans to distance themselves from yam branding.

California producers however believe the mixed terminology can be confusing to both consumers and chefs.

During the fall harvest, conveyer belts are humming. At Quail H Farms in Livingston, thousands of red-skin, orange-flesh sweet potatoes move past workers who pack them in boxes labelled, “Quality Yams/Sweet potatoes.” 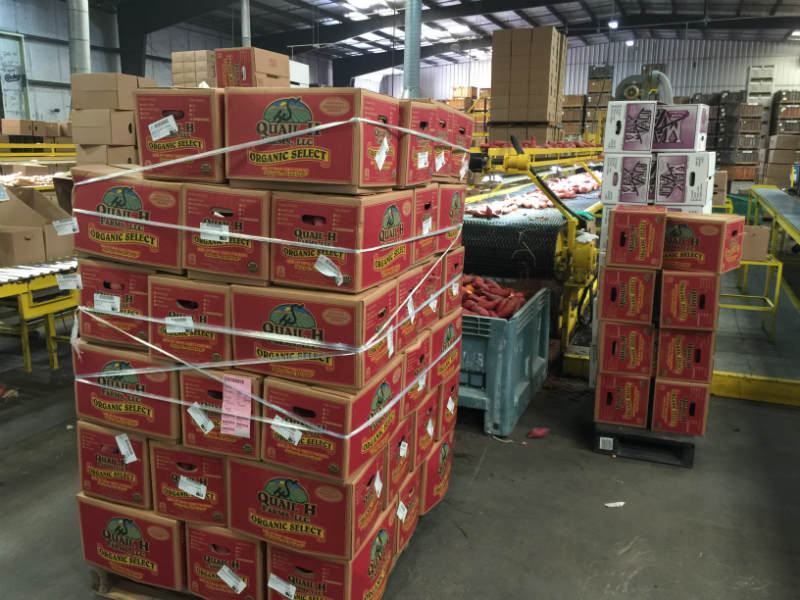 Boxes of sweet potatoes at Quail H Farms, labeled "Quality Yams/Sweet Potatoes. These are the last boxes at this facility to use the "yam" terminology. (Randol White / Capital Public Radio)

Darren Barfield is the farm’s chief operating officer and a member of the California Sweetpotato Growers cooperative. He says these boxes are the end of an era as the industry in California switches to sweet potato-only branding.

As for that “Garnet” branding on the box back at the restaurant?

“I can’t guarantee that they’re you’re not buying a Garnet, but by-and-large they’re just not produced anymore,” he says.

Barfield says the Garnet sweet potato variety was swapped out around 20 years ago by the Diane and Evangelin sweet potatoes. Another popular variety marketed as a yam has a similar story.

“Jewel is another variety that isn’t produced anymore,” says Barfield. “It was replaced one generation back by the Beauregard sweet potato, and now the most-common orange-skin/flesh is the Covington.”

While the California growers may be pushing to drop the term yam, grocery stores have yet to embrace the idea at the same level.

“Consumers are buying sweet potatoes, even if they think they’re buying yams,” says Kathy Means with the Produce Marketing Association based in Delaware. Her organization represent the entire global supply chain of the fresh fruit and vegetable industry.

Means says she hasn’t seen data on how sweet potatoes are currently marketed to consumers, but she’s not aware of any big push to drop the yam term. She also says it may be a tough sell, especially this time of year, when family traditions come into play, regardless of how botanically incorrect the term yam may be.

“I think when you pull great-grandma’s recipe out of the recipe box for her candied yams or her marshmallow sweet potatoes, folks have a sense of what it is that they’re eating, in terms of family traditions and holidays and things like that,” says Means.

Back at the sweet potato packing plant in Merced County, Darren Barfield understands that point, but believes there’s hope for the future.

“My mother went to her grave telling me the difference between yams and sweet potatoes, and bless her heart, she might have been wrong,” says Barfield. “So, there’s not much that we can do to change the mind of the generations who have always known sweet potatoes as yams, but we’d love to be able to educate the upcoming generations.”

Note: The two top-producing sweetpotato states in the nation are North Carolina and California. The North Carolina Sweetpotato Commission and the California Sweetpotato Growers agree that sweetpotatoes should be one word, not two. The reason why is that they are not sweet potatoes. Potatoes are botanically very different from sweetpotatoes, so sweet should not be an adjective, but rather part of the word itself. In this article we’re following common usage and Associated Press style by using “sweet potato.”

Capital Public Radio held a sweet potato cook off in late October so that we could share a winning recipe with you. The overall best recipe went to Ricki Bergado, a volunteer who works in our membership department. Ricki got her Sweet Potato–Miso Pie with Chocolate-Sesame Crust recipe from Bon Appétit. Her pie is pictured here.