It’s a crisp September night at Clockspring Vineyards in Plymouth, in the Shenandoah Valley region of Amador County. Tension is in the air.

Owners Kathy and Frank Alviso are about to witness a machine harvest of organic Zinfandel grapes in their vineyard.

Tonight is a do-over of sorts.

“Many years ago, we used a machine on whites,” she explains with a rueful laugh, as she turns to her husband, Frank.

“But the machines were in their ‘early stages’ - would you say?”

“It was pretty much a disaster,” Frank chimes in. “The people running the machines didn’t know what they were doing. The machinery was junk.

Since then, the technology of machine harvesters has leapt forward. Over the past several years, labor shortages have worsened.

As a child P.J. Alviso, the couple’s son, rode his go-cart around these slopes. He’s now general manager of Clockspring Vineyards.

He says the labor situation reached a breaking point in the Shenandoah Valley last year.

“We were looking at how vineyard tasks were getting accomplished,” explains Alviso. “Specifically, how long it was taking to pick a truck of grapes. If you added the hours up, it just didn’t work.” 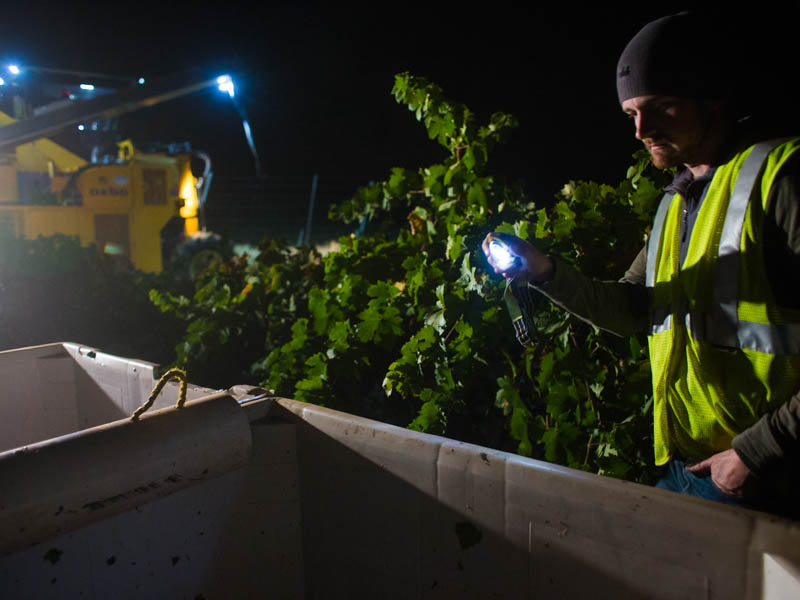 Which is why a giant marigold machine is straddling the vines on this gentle slope in Plymouth. Kathy and Frank Alviso are joined by neighbors who’ve gathered to see the machine harvester up close.

A series of bow-shaped rods hit the trunks of the grape vine, vibrating the berries off their stems. In parallel, a tractor operator runs a tractor two rows over. It catches the fruit from the Bow Rod.

The drivers take a few practice-runs to calibrate their speeds and get in sync as they move down the vineyard row.

The transition to machines isn’t without its glitches, says Brandon Borth of Lodi. He owns the harvesting machine. His grandfather’s farm is in Ione, in nearby Jackson Valley.

“With Shenandoah Valley vineyards that are new to machine picking, we come across a lot of different pruning practices that can cause some issues.”

Like dead wood on the vine that breaks off and jams the machine, says Borth. That’s not the case here at Clockspring where the trellis system is adapted to be able to take machine or hand harvest. 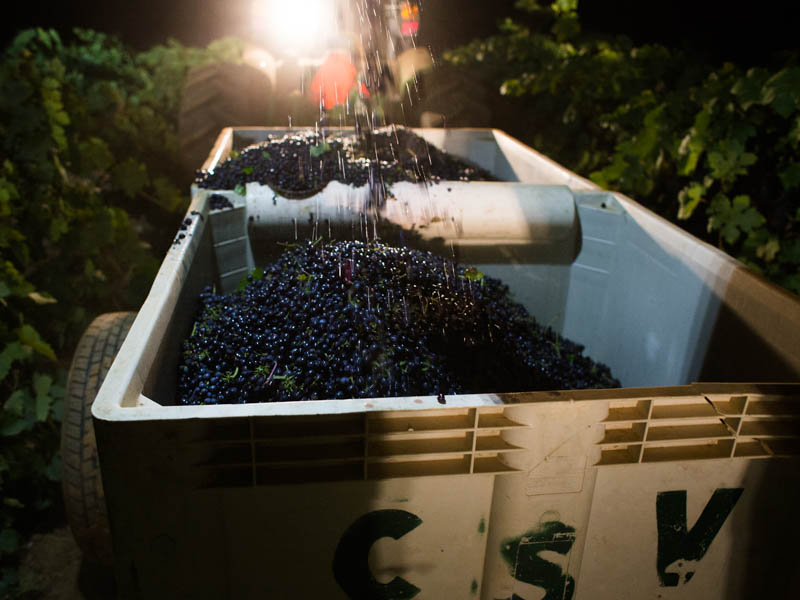 Grapes are deposited into bins pulled by tractors one vine over at Clockspring Vineyards on Sept. 21, 2017. (Andrew Nixon / Capital Public Radio)

Although he jokes that the bank still owns the harvester, Borth is confident about his $300,000 investment. He says he’s seen an uptick in calls for machine picking in this region as growers look for more options.

Before dawn, the machine harvest will yield 40 tons of organic Zinfandel grapes. P.J. Alviso says that could take three days of hand picking given current access to farm laborers.

He says he crosses paths with industry players in the high-value wine grape sector who prefer to “avoid the facts” when it comes to California’s labor pool.

“There has always been abundant cheap labor in California. That’s what this industry is built on,” Alviso points out. “It’s easier to think that’s going to keep happening.”

It’s not just harvest time when the labor shortage calculation comes into play, says Alviso. It’s a crunch at other points of the year when viticulture tasks like shoot-thinning and leaf-pulling are needed.

“If I use a machine leafer it won’t look quite as pretty as with a hand crew,” Alviso admits.

“But if I can get that work done exactly when it’s best for the vine, I’m going to make better wine than if I do it with a hand crew that has to work three other ranches before they get to me.”

Clockspring Vineyards is by no means alone in making this calculation.

John Aguirre is president of the California Association of Wine Grape Growers.

“The evidence seems to be pretty clear,” he says. “You can embrace mechanization and, for many growers, have better quality grapes coming out of that vineyard than you get today. That’s a compelling fact and that’s what’s driving a lot of people to embrace mechanization.”

The sight of a noisy machine shaking the vines seems to clash with idealized narratives that propel wine marketing: sun-drenched vineyards hand-picked by the same family for generations.

“They imagine little, grey-haired Italian ladies picking into these little baskets that they go crush with their feet!” says P.J. Alviso.

He appreciates that the stories vintners and wineries tell are crucial to selling wine. But he’s betting a new generation of millennial and Gen X consumers will think vineyard technology is cool.

Meanwhile, as the night in the vineyard wears on, Frank Alviso quietly appraises the work of the machine harvester.

“It’s removing the fruit in good order. It’s not tearing the vines down to pieces,” he notes. “It’s doing as it should do.” 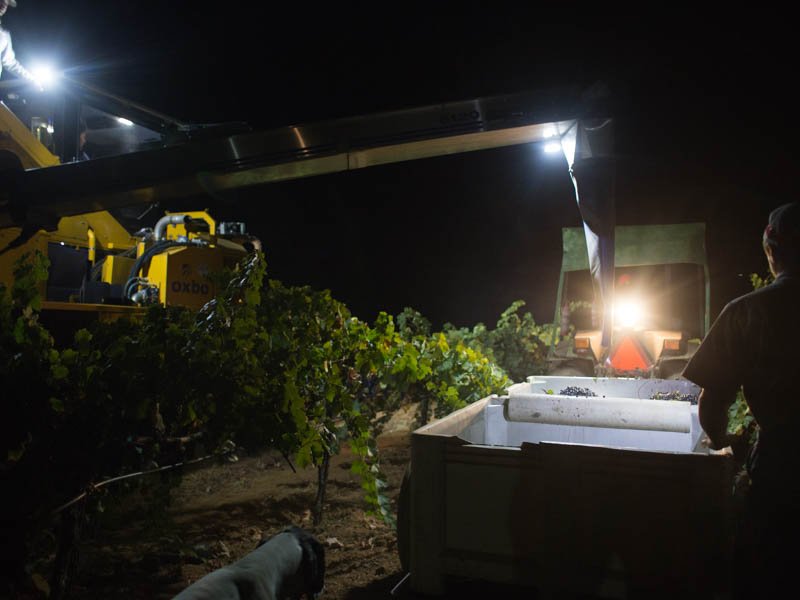 It’s a far cry from the early model harvesters that chewed up the vineyard’s wooden stakes and spit them out in splinters all over the ground.

Frank Alviso’s father and grandfather were cattle ranchers in California going back more than a hundred years. Alviso grew up around it and he planned to make his living that way.

“But one day my father said, ‘It’s over in California.’”

“The cattle business, the cowboys, it all changed and drew us away,” reflects Alviso.

He planted this vineyard in the early 1970’s. He tends to take a long view when it comes to California agriculture so he knew the shift to machine harvest was bound to happen.

It was only a matter of when.

Alviso watches the glow and hum of the harvester disappear over the vineyard’s ridge.

“It’s remarkable how fast they go.”