Sacramento is launching a test Wednesday of protected bikeways on one of the city's busiest streets.

It's in line with a design trend seen in several of the nation's largest cities.

For three days, a busy stretch of P Street between 15th and 13th streets will be temporarily reconfigured to represent a parking-protected bikeway.

The parked cars that line the sidewalk on the far left side of this one-way street, will be shifted right into the roadway to allow room for a bike lane and three-foot buffer zone.

The end result will mean one fewer lane for vehicle traffic.

"We want to see what the community thinks about it," said Jennifer Donlon Wyant, the city's Active Transportation Program Specialist. "This is a brand new facility type for us in Sacramento"

Wyant said the traffic corridors scheduled to eventually get these protected bike lanes have a high rate of injuries for cyclists, as well as pedestrians and drivers.

"We've got a lot of high-density housing behind us and it's really hard for residents to cross the street, it's hard for them to actually be outside their homes with the high volume of cars going by, the fast speed of cars," she said. "This project will actually help "

And it also helps increase the number of people who choose to ride.

Kay Teschke is a professor at the University of British Columbia and has extensively studied bicycle infrastructure. She said cities in Canada that switched to separated bike lanes, saw a jump in ridership with one particular demographic.

But despite support from the cycling community for these projects, there are those who are adamantly against the current trend.

"It prevents cyclists from using the safer and more efficient way of obeying the rules of the road," said John Forester, a longtime advocate for street cycling.

"Cars don't have rights to the road," he said. "People have rights to use the road. It's immaterial whether they're riding bicycles or driving cars."

Forester sights studies showing protected bikeways are more dangerous at intersections, but others say those studies no longer hold up, including Teschke.

"His argument is an argument, it's not evidence based, at least not anymore," Teschke said. "The evidence is overwhelmingly in favor of the improved safety with separated or protected bike lanes."

This week's test in Sacramento precedes plans to reconfigure roughly 20 city blocks with buffered or parking protected bike lanes, at a cost of a half-million dollars.

The city hopes to have the bikeways in place prior to the next Bike Month in May.

The city of Sacramento will host an open house at City Hall to further discuss the project. It'll be held on Monday from 5-7 p.m.

A map of the protected bikeways that will be tested in Downtown Sacramento. 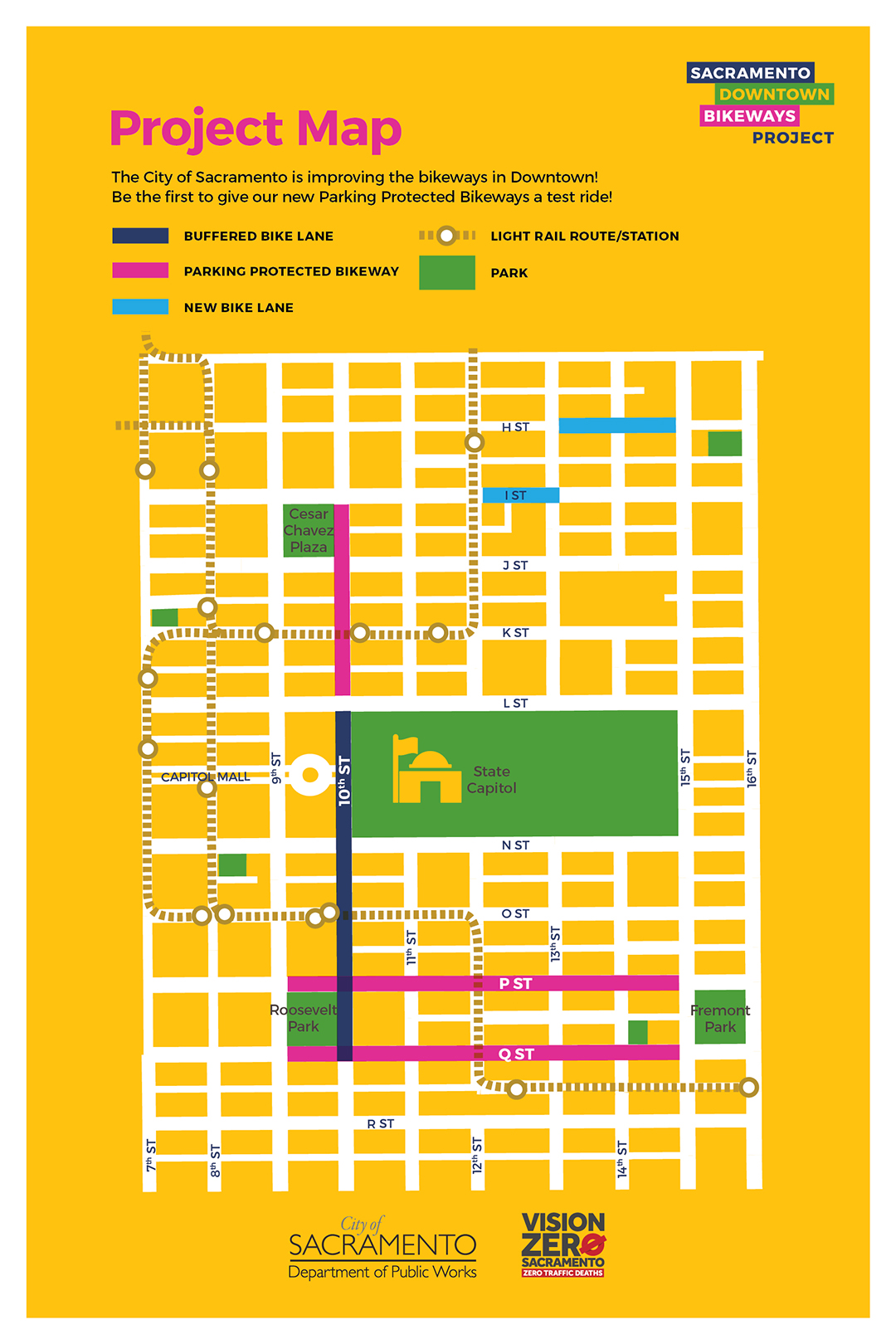