Outside Trump Speech, A Tale Of Civility In An Uncivil Time

There they were, amidst hundreds of protesters and a smaller group of supporters, as President Trump addressed the American Legion National Convention in Reno Wednesday.

Two people, with discordant views, searching for common ground. A civil discussion of politics in an era of incivility, anger and distrust.

“Actually, this is signed by President Trump, and his son,” he said proudly.

And there was Cathy Blane, a 58-year-old Reno health care worker holding up a “Black Lives Matter” sign.

“Made this in my backyard last night, and I put it on a Facebook page,“ she said, “and I’ve been attacked about it all morning long.”

They talked through their issues, looking for areas where they agree.

For instance, immigration: “We agree on a path to citizenship!” Blane proclaimed. “There you go, that’s a huge one…”

And about Black Lives Matter.

“I’m just seeing it visually – black lives matter, right?“ Coffey said. “So she’s helped me understand that there’s more to it than just what it says.”

For her part, Blane said she wishes the slogan ended with the word “too,” so it might be more inclusive.

Now, that’s not to say they don’t hold clear views. Blane referred to Trump’s presidency as a “cancer.” Coffey says people who immigrate to the country illegally are breaking the law.

But they’re both striving for a connection.

“We only met, what, a half-hour ago,“ Blane said. “So, so far, really, we’ve talked it out. A little anger at first, a little bit, and now I kind of feel like he’s a friend.”

“Love and respect your neighbor, and understand that some people don’t agree with what you want,“ Coffey added. “The use of force is not the answer.”

But not before ending their chat with a handshake. 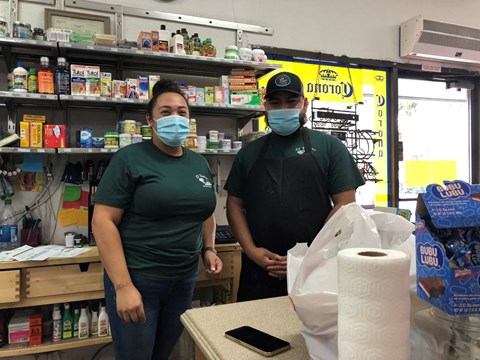 Latinos in Woodland Were Hit Hard During The Pandemic. Here’s What They’re Thinking About The Recall.