But California Democrats want to thwart Trump’s promise to deport millions of immigrants who are in the country illegally: lawmakers want to make California a sanctuary state.

The measure isn’t the first of its kind. Oregon has had a similar law for decades. But California’s law would be much more limiting in how law enforcement communicates with federal agents.

In fact, if the bill passes, California would have one of the most protective sanctuary state laws in the country for immigrants.

Advocates for immigrant communities in the Golden State say since the election people have become more fearful of being deported.

“Sometimes they’re afraid to even go out, afraid even to go to the grocery store,” said Alex Vaiz, senior pastor at Vida Church. It’s a small, evangelical congregation that worships behind an art gallery in Sacramento, California. 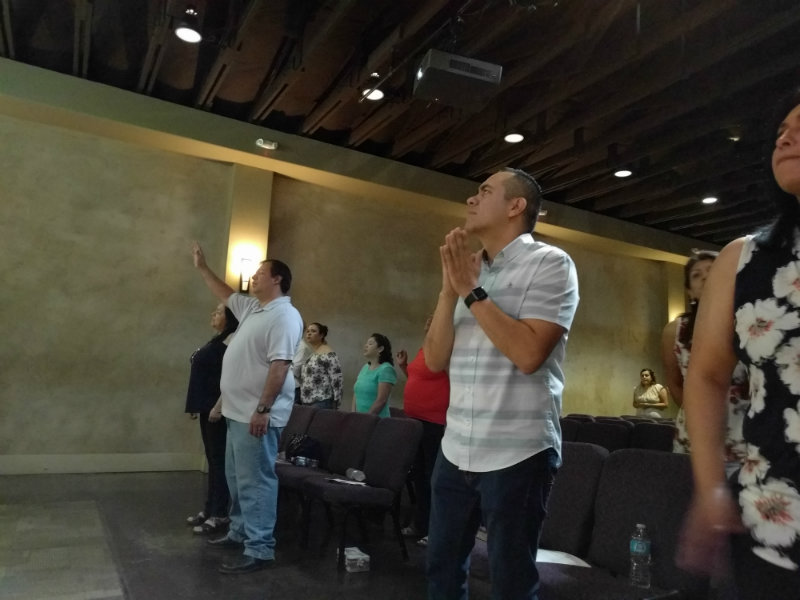 A bilingual Christian rock band leads the songs at worship services. The parishioners are mostly Latino and many are in the country without legal documentation.

After reports of immigration arrests at courthouses and near schools in California, Vaiz found Immigration and Customs Enforcement camped out in the church parking lot this spring.

Neither California nor so-called sanctuary cities can prevent that since ICE is a federal agency.

Vaiz said he thinks California should do what it can to discourage local law enforcement from collaborating with ICE.

“If we make it harder for them, it causes and creates more safety to our community,” Vaiz said.

That’s pretty much the same line from Democratic lawmakers in California as they work to pass a sanctuary state measure. It would restrict local and state law enforcement from working with or even communicating with ICE, except in cases where federal agents provide a warrant. It would also create an exemption when an undocumented immigrant has committed specific felonies that California classifies as "violent" or "serious."

California’s sanctuary state measure will take its next step Wednesday, when the state Assembly Appropriations Committee considers it.

Proposed amendments to the bill could allow law enforcement more discretion about communication with ICE, after Governor Jerry Brown expressed reservations about the current version.

On a basic level, Oregon’s law does many of the things that Democrats in California are trying to achieve. Supporters say it’s helped separate local police work from federal immigration enforcement.

“So, the federal government, that’s up to you to decide how you’re going to enforce immigration laws,” said Andrea Williams, executive director of CAUSA, a Latino rights organization in Oregon. “But we as Oregonians, we’re not going to have a say and we’re not going to help you do that.”

While the California measure is a response to President Trump, the Oregon law passed with bipartisan support 30 years ago in part to prevent racial profiling — but also to save city and county law enforcement dollars.

Compared to California, Oregon’s law is much shorter and less restrictive. For example, Oregon allows local law enforcement to communicate with ICE.

The debate over the measure in California has focused on public safety.

“We depend on our communities, particularly our immigrant communities, to cooperate with us. Not only to keep them safe, but to keep all of you safe,” Beck said at a recent news conference.

But much of California’s law enforcement community opposes the bill.

“It is in the interest of all of our communities — and especially the immigrant community —  that dangerous offenders who are in this country illegally be deported, so they cannot continue to prey on the innocent victims,” Brown said at a recent hearing on the bill.

Those concerns expressed by Brown played out in Oregon in July.

A man who is in the country unlawfully was released from jail.

Local officials and ICE disagree on the circumstances of his release, but after he was out, he allegedly assaulted two women in Portland.

The U.S. Attorney for Oregon, Billy Williams, said this is why it’s important for local police to be in touch with ICE.

“We have two more unnecessary victims of violent crimes because of the over politicization of the entire topic of immigration,” Williams recently told Oregon Public Broadcasting’s All Things Considered.

The federal government wants the full cooperation of state and local law police when it comes to enforcing federal immigration laws.

But laws like the one California’s considering and the one Oregon has on the books are clearly pushing back against that notion.

The tension could be resolved in two ways. The first is Congress passing a major immigration reform bill, making clear what is and isn’t allowed. That’s unlikely given gridlock in Washington.

The other option would be to sort out the sanctuary state issue in the courts. Already, lawsuits are working their way through the court system.

Those lawsuits could answer questions about how much sanctuary a state can provide immigrants who do not have documentation, and how much local law enforcement must work with ICE.