"Backwoods Barbie" Romps In Music Circus Revival Of "9 to 5"

Many people in the Music Circus audience on Tuesday for the musical “9 to 5” are old enough to remember buying pet rocks, and using an IBM Selectric typewriter at the office.

Based on 37-year-old Dolly Parton film, "9 to 5" may charm those with fond memories of the 1970s, but it might have limited appeal for folks under 50.

The first voice you hear is a huge recorded projection of a virtual Dolly Parton, all big hair and cleavage, recollecting the good old days. And the very first number is the title song – easily the catchiest tune in the show.

This show seems determined to give ticket buyers their money’s worth, because the title tune returns again and again with variations. A few of the other songs are cute – I enjoyed the one in which the Dolly Parton stand-in warbles “I’m just a backwoods Barbie/In a push-up bra and heels.” But most of the music is merely serviceable, and fades from memory during the subsequent scene.

The plot involves a mean, pompous, devious boss – the sort of guy who feels up women at will -- and three long-suffering middle-aged secretaries, who struggle to stay civil as they put up with him.

The boss enjoys being a bully, so when he actually offers a compliment to one of his “girls,” it’s really a put-down:

And the women really resent him:

Each of the three women acts out a wish-fulfillment dream involving revenge fantasies with occasionally kinky implications. There’s also a good deal of bawdy comedy involving lustful urges, puffs of marijuana, office romance, threatened gunshots to the groin, and the like. 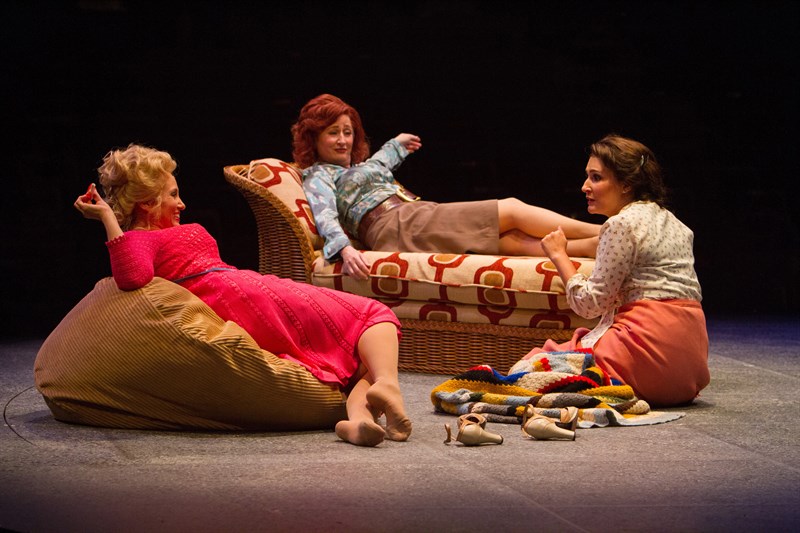 At the same time, “9 to 5” tries rather hard to conclude as lighthearted, slightly-naughty-but-still-wholesome entertainment – including a feel-good ending, in which the manipulative boss finally gets what’s coming to him. And the singers and dancers give good performances – they’re better than the bland material they’re generally given in this show. And I really did enjoy the loopy dance scene with the bright red cowboy hats.

But ultimately, “9 to 5” is a little sweet sugar cookie of a show – you can feel a certain glucose rush as the elemental story plays out on stage. But afterward, you may find yourself leaving the theater feeling a tad hungry for something more substantial – especially if you were born after 1980.

The Music Circus production of “9 to 5” continues through Sunday at the Wells Fargo Pavilion in Sacramento.