Brown says that’s because it’s impossible to tell whether a replacement by Republicans in Washington will become law and—if it does—how it will differ from the bill that passed Congress.

The measure would roll back an expansion of Medi-Cal. Brown says the state would either have to drop coverage for millions or pay an amount roughly equal to the entire cost of the University of California system.

"That kind of money would defund the university if you did it all from one source, so the only answer is to fight," he says. "We gotta stop it."

A chart behind Brown at his budget announcement calculated the state would lose more than $5 billion of federal funds in 2019 and almost $25 billion within a decade.

Update 5:43 p.m.: California Governor Jerry Brown has proposed withholding money from the University of California system, until it makes changes, after a scathing state audit.

The governor's plan would increase funding to the university system by about $130 million, but it would withhold $50 million of that until it adopts changes recommended in the audit. Released late last month, the audit found a $175 million reserve fund, undisclosed to the public, while Regents voted to raise tuition. It also criticized high salaries for top administrators, an observation Brown echoes.

"I do think there’s some modesty of remuneration that should be picked up, and I put the $50 million in there so we can hold their feet to the fire," said Brown.

University of California president Janet Napolitano denies the administration hid money and disputes the audit’s findings. State lawmakers would have to agree with the governor’s plan for the state to withhold the funding.

Update 4:28 p.m.:  Governor Jerry Brown’s newly revised budget proposal walks back planned cuts to a program helping old and disabled people. Capital Public Radio’s Daniel Potter reports California counties had feared they’d have to pick up the tab.
The program aims to help folks, especially aging seniors, stay out of more costly institutions. It was part of a partnership between the state and counties with less-than-stellar results. So the state planned to end its $600 million contribution this year.
DeAnn Baker with the California State Association of Counties says that would’ve left places like Los Angeles holding the bag.
“They were basically preparing all of their county departments to get ready to absorb a 7 percent cut across the board,” says Baker.
Now the governor’s proposal would chip in about $1 billion over the next four years to help with that cost. That still leaves counties on the hook for hundreds of millions in coming years, but compared to a few months ago, Baker calls the new proposal “remarkably better.”

Update 2:23 p.m.: The end of the drought will save California some money in its next budget.

“The bulk of the $63 million that we still have in our drought package is for CalFire," says Cohen. "There are still lots of dead trees out there that are going to make a likely rough fire season.”

This budget also includes some money for tree removal. The drought exacerbated a bark beetle infestation that has left around a hundred million trees dead and dying statewide.

The current plan has a slightly more optimistic revenue estimate than in January—it projects $2.5 billion more revenue—and Brown has proposed restoring some cuts he pushed for in January. Democratic lawmakers complained at the time that the cuts primarily targeted their priorities, such as funding for child care providers, affordable housing, and scholarships for middle-class students.

The governor’s May revision restores the planned increase for child care provider rates and includes more funding for immigrant legal services—a major priority of Democratic lawmakers, after the election of Donald Trump.

“This is a better budget than the one the Governor proposed in January,” Assembly Speaker Anthony Rendon said in a statement. “While revenues are below what was projected [last year], the state’s fiscal position is strong, giving us the flexibility to avoid cuts and to make targeted investments.”

The budget retains cuts to the state’s Middle-Class Scholarship Program and includes no new money for affordable housing, both potential points of negotiation moving forward.

“We differ with Governor Brown on some key areas, notably preserving middle class scholarships for college, raising reimbursement rates in Medi-Cal, and investing in affordable housing,” Assembly budget chair Phil Ting said in his statement, while still praising the proposal.

Meanwhile, Republican lawmakers criticized the plan as outsized spending, and particularly focused on the governor’s continued advocacy for the state high-speed rail project.

"Despite talk of fiscal restraint and budget deficits, the revised budget would still result in a spending increase of $1.7 billion,” said Republican Senate leader Patricia Bates. “Over the past six years, spending has gone up by $38 billion and questionable priorities such as high-speed rail continue to be funded. Now is not the time for the Legislature to create new spending we cannot afford.”

Deborah Kong, interim executive director of Early Edge California, said she was glad to hear about the elimination of a proposed freeze on early childhood education and child care funding.

“I am pleased to see Governor Brown keep his promise to California’s youngest children and families," says Kong. "Investing in the statewide need for early education and child care is one of the most powerful ways we can counteract the pervasive effects of poverty in our state."

“I agree with Governor Brown that the Legislature should take action to improve and extend cap-and-trade beyond 2020, building on what we have learned from the existing system and ensuring that we meet our greenhouse gas reduction goals set in last year’s SB 32," he says.

He says he looks forward to working with the Governor and his staff to extend cap-and-trade to continue the state's global leadership in the fight against climate change.

”Brown continues to sound all the right notes about fiscal discipline and debt reduction, but has the largest ever state spending plan, out of whack spending priorities and little accountability. Overtaxed Californians need relief, not a continuation of the government’s never ending tax and spend cycle that makes California so unaffordable.”

The deficit is less than the $5.8 billion shortfall Brown projected in January but still requires the state to pull back on spending. Better capital gains revenue decreased the shortfall.

“Make no doubt about it: Cuts are coming over the next few years, and they’ll be big,” Brown told reporters at a press conference. 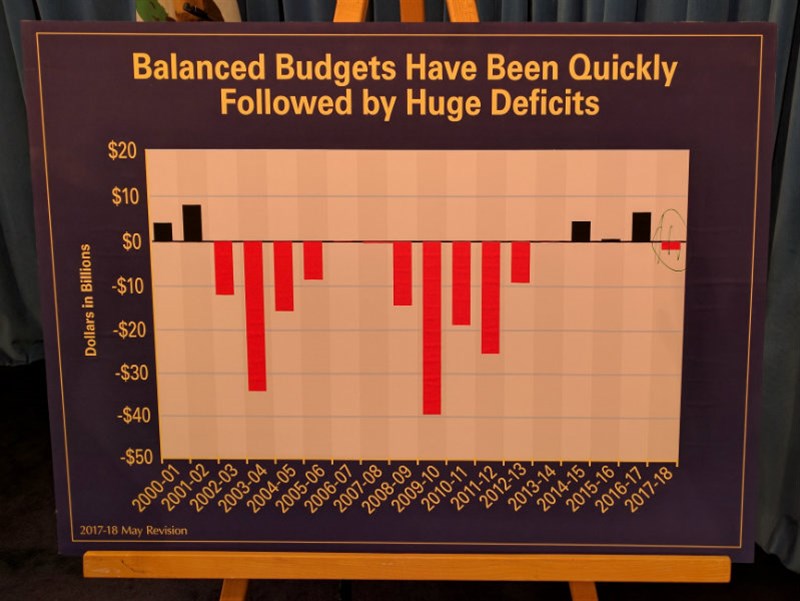 The governor’s revised budget, which totals $183.4 billion for all funds, backs away from some cuts proposed in January to counties and to child care programs. It still, however, cuts the state’s Middle Class Scholarship Program.

The revenue shortfall would leave the state with an overall $400 million budget deficit that must be closed before Brown and the Legislature can approve a final budget in June.

After a scathing UC audit, Brown proposed $50 million for the system, but only if it makes the audit's recommendations.

For county governments, which face about $600 million in higher costs for In-Home Supportive Services, the governor’s revised budget lessens this impact by contributing $400 million.

Brown’s budget does not include increased funding for repairs and replacement of some of the state’s aging government buildings.

Capital Public Radio will update this story throughout the day.

UPDATE: This article has been updated to clarify that the $3.3 billion shortfall is a 'revenue shortfall' compared with projections from the previous fiscal year. A note has also been added that the governor's updated plan would result in an overall $400 million budget deficit.

The governor will likely continue to push a message of fiscal discipline, particularly after the House of Representatives passed its health care bill last week.

Brown has stuck to that mantra both in bad budget times, such as when he returned to the governor’s office in 2011, and after state revenues surged in recent years.

So it’s no surprise that now, with the state in decent financial shape but with significant political uncertainties looming — particularly in Washington — that the governor would continue to work on keeping new permanent state spending increases to a minimum.

Democrats are expected to ask for targeted new investments to help college students and working families, among others.

The passage of the House health care bill could make the governor a little more reluctant to increase Medi-Cal provider rates — a top priority for doctors, other health care providers like Planned Parenthood, and lawmakers of both parties.

Budget negotiations between the governor and Democratic leaders will soon begin in earnest. The Legislature faces a June 15 constitutional deadline to pass a spending plan.