Sacramento Theatre Company Presents The Saga Of The Donner Party ... As A Musical

The Sacramento Theatre Company is premiering a new show based on California history: a musical about the Donner Party’s famously ill-fated journey in 1846. The show is an impressive production about a long trip that culminated in tragedy.

Just about everyone knows what happened to the Donner Party when they got trapped by snow in the Sierras. So when people find out the Sacramento Theatre Company is doing a musical, based on that story, they immediately ask “How on earth do they handle it?”

Well, let me tell you. This is a big, ambitious project — an old-fashioned, full-length musical that runs two-and-a-half hours, with a big cast and more than 30 songs. It opens with the pioneers departing for California — a scene brimming with Westward-ho, can-do confidence — resembling “Oklahoma.” 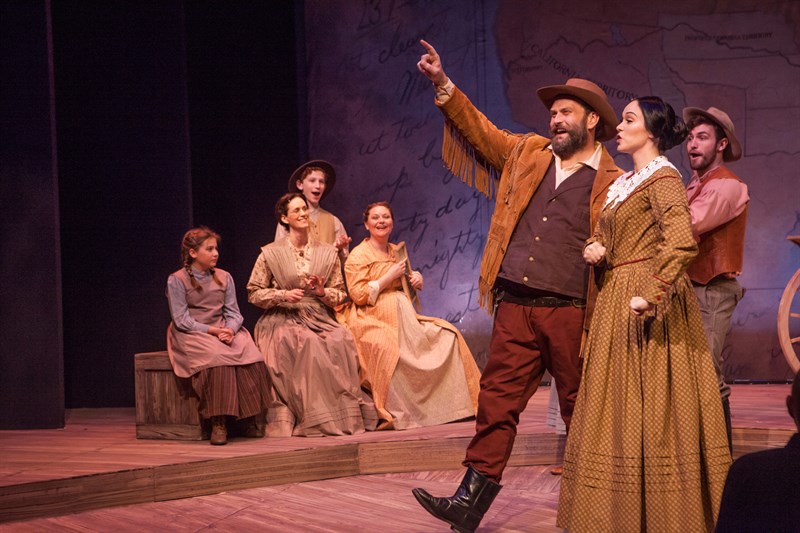 But soon, the women on this wagon train realize that the men are overconfident — in fact, they don’t really know what they’re doing. At first, this comes out in a humorous song, with the wives doubting their husbands’ competence.

But as things keep going wrong, the frustrated men start bickering, with different voices yelling “Move those damn oxen and let me pass.” “It’s a narrow hill, John, wait your turn!” “It is my turn!” “Whipping those oxen won’t help !” “Tend your own team.” “You wonder, what could cause a man to kill another man.” Eventually, two men fight, and one is stabbed to death.

More and more people die. The desperate survivors realize that they are woefully ill-prepared, and the leaders have made poor decisions. The trek to California takes on grim urgency, recalling “The Grapes of Wrath.”

After intermission, we see the dwindling Donner Party, stranded and stuck on the east side of the Sierras. There aren’t many musicals about frostbite, starvation, and what some in the Donner Party resorted to when the food ran out. This show goes for an uplifting finale when relief finally arrives. But there’s a visually stunning symbolic image that – much like the ending in “The Grapes of Wrath” – viewers will likely respond to and interpret in different ways.

All in all, this premiere production is an impressive undertaking by the Sacramento Theatre Company. The cast is good. And this score is better than most new musicals I’ve heard recently. But with nearly three dozen numbers, the “The Donner Party” is too long and needs trimming. Yet I do hope that this show continues to develop. There are lots of good things to like about this emerging new musical, and the roots in our own history are a significant plus.

The Sacramento Theatre Company’s production of “The Donner Party” continues through May 14.