Dispatches From The Field: Back On The Trail Of Bee Deaths In Fresno

Food and sustainability reporter Julia Mitric is  back on her quest to try to find out what happened to tens of thousands of honey bees that died just before full almond bloom in February. Join Mitric on the next installment of her adventure.

Dispatch #2, April 12, 2017, 6:40 p.m.: Beekeeper Rafael Reynaga and bee broker Joe Traynor move in the same circle. And they are both connected to a large-scale bee death incident that happened in Fresno mid-February.

But the men had never met in person until the three of us convened today on a grassy knoll in the foothills on the eastern side of Fresno. We were there to check the health of hives Reynaga is rebuilding after he found thousands of his bees dead in a Fresno almond orchard.

Reynaga has been in the bee business (honey and pollination) for more than fifteen years and he's based out of Reedley, in Fresno County. 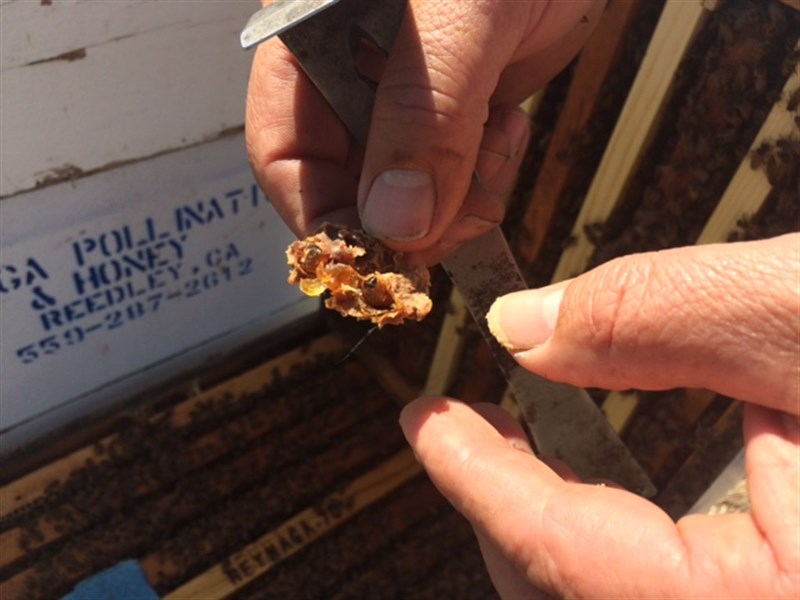 Fresno-based beekeeper Rafael Reynaga holds a "virgin queen bee" he found while checking on one of his bee colonies near citrus groves in the foothill region of Tulare. Julia Mitric / Capital Public Radio

Traynor is based in Bakersfield and he works with dozens of beekeepers in state and out-of-state. It's Traynor's job to wrangle bee hives into place for pollination. He’s been in the business for fifty years, and he prides himself on providing "strong" (healthy) bees for pollination in Fresno’s massive almond orchards. When things went wrong this winter, Reynaga's honey bees took a massive hit. He estimates his losses at $100,000.

And although Traynor was the broker responsible for placing these unfortunate hives, Reynaga says he doesn't blame him. They both believed the honey bees would be safe.

But when Reynaga went to check the hives after his brother (a fellow beekeeper) called to tell him there were loads of dead bees, he says it was clear to him that the pollinators had died from exposure to pesticides toxic to honey bees.
Reynaga and Traynor share a working hypothesis - that an illegal pesticide application occurred in nectarine orchards close to both Fresno almond orchards where tens of thousands of honey bees died.

They believe it happened during the day on a Sunday, when bees placed in the almonds (which hadn't bloomed) may have flown two to three miles away to find forage in blooming nectarine orchards.

Both men acknowledge it's very difficult to prove a "bad spray" took place.

For now, the evidence they point to is a set of USDA lab results. (The samples were bee bodies and "bee bread" from the stricken hives in Kerman, eastern Fresno). Those labs show the presence of at least two pesticides toxic to honey bees:  CARZOL and chlorpyrifos. (CapRadio has a copy of the USDA labs; we are consulting with a pesticide researcher to determine the concentration level for the pesticides found in the bee samples.)

At this time, both Reynaga and Traynor remain cautiously optimistic that a current investigation by the Fresno County AG Commissioner's office will yield concrete information about what happened to the tens of thousands of bees that died, when it happened... and who is responsible.

That way, says Reynaga says, even if he never receives compensation for his losses, perhaps growers, beekeepers, bee brokers and county AG officials can figure out how to prevent a massive bee die-off like this from happening again.

Dispatch #1, April 12, 2017, 3:50 p.m.: Here's beekeeper Rafael Reynaga checking the health of his hives in the eastern foothills of Fresno County. Reynaga is rebuilding his colonies after his hives got hit by a massive die-off of honey bees placed in almond orchards for pollination in February. Reynaga's been beekeeping since the mid 1980s. He says this is the first time he's been hit with a massive loss of hives. He says he suspects his bees died from exposure to pesticides from nearby nectarine orchards, but he's awaiting for the results of an investigation by the Fresno County Agricultural Commissioner. 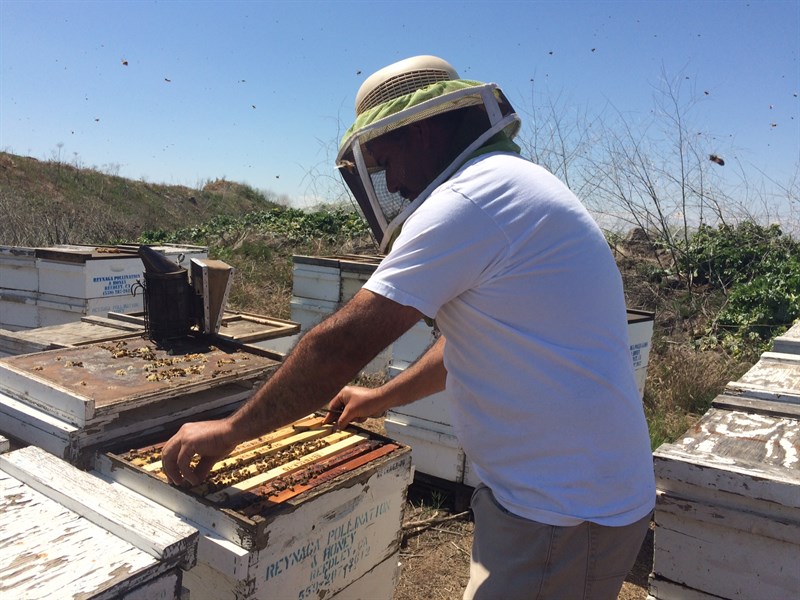 Original: The last time I hit the road to Fresno I was trying to find out what happened to tens of thousands of honey bees that died just before full almond bloom in February.

Click here to read about Mitric's quest from the beginning.

This is the next installment of my adventure.

In March I visited two of the sites where bees died in the Kerman district on the western side of Fresno County. Tom Ullmann was my guide. He works for the Fresno County Agricultural Commissioner's office and he's part of the team investigating what happened.

My initial trip to Fresno answered some of my questions, and opened up even more.

Plus, there was still big gap in my reporting: I'd had many background interviews by phone with people related to the investigation, but I hadn't interviewed bee brokers or beekeepers directly impacted in the February incident, in person.

That's why I'm going back to meet with a bee broker and beekeeper who were hit hard by the bee deaths. I'm going to tag along as they assess the health of the new bee colony that's developing in the bee boxes damaged by the February incident.

The bee broker I'm meeting says dead bees on site (in the orchards) are not the only consequence of what happened.

So at this moment I'm driving to the Sanger agricultural district, on the eastern side of Fresno County. Beekeeper Derek Lawrence (who has heavy losses in the February incident) says there was a large-scale bee die off in this specific area several years ago.

He and other several other bee brokers have a working hypothesis that bees were exposed to harmful pesticides from a nectarine orchard in bloom not far from where the bees were placed in almond orchards several days ahead of almond bloom.

But the Fresno County Agricultural Commissioner's team says spray applications were done "by the book" following rules meant to keep honey bees safe from pesticides toxic to them.

Today I hope I'll learn something about how beekeepers can tell a healthy, thriving bee colony from an unhealthy one.

My sources tell me I will be wearing a bee veil.