Theater Review: 'The Glass Menagerie' Gets A Rare Staging In Sacramento

Tennessee Williams wrote several American classics in the 1940s – but they are seldom staged in Sacramento with professional actors. Now the Sacramento Theatre Company is doing the drama that was Williams’ Broadway breakthrough – “The Glass Menagerie.”

The production has its good points, but also some flaws.

“The Glass Menagerie” gets revived fairly often in New York; there’s a production on Broadway right now. But in Sacramento, many people have never seen it staged.

The play is set in the Great Depression, and it profiles a stressed-out Southern family that’s fallen on hard times.

Take the way the imperious mother talks about her son Tom, whose dead-end job in a warehouse is the household’s economic lifeline. She rips into him for going to the movies, and then a bar, almost every night.

"Nobody goes to the movies every night. Nobody in their right minds goes to the movies as often as you pretend to," she says. "People don’t go to movies at nearly midnight. Movies don’t let out at 2 a.m. Coming in stumbling, muttering to yourself, like a maniac. You get three hours of sleep, and then go to work? Ha! I can picture the way you’re doing down there! Mopin’! Dopin’! Because you’re in no condition… What right do you have to jeopardize your job!”

That’s actress Janis Stevens, who gives a bravura performance as a fading, middle-aged Southern belle who’s worried sick, and deals with her fears by haranguing her son and her painfully shy daughter, who are well into their 20s and sharing a small apartment with mom.

(from left) Janis Stevens as Amanda, Katherine Stroller as Laura, David Crane as Tom, and Eric Craig as The Gentleman Caller in the Sacramento Theater Company staging of Tennessee Williams' "The Glass Menagerie."  Charr Crail Photography

Everlasting regret is exactly what this dark, talky memory play is all about. But unfortunately, this well-intended production comes up somewhat short of the mark, in large part because the young actor playing the introverted, intellectual son is a little too quick to smile, a bit too gregarious, and insufficiently withdrawn and bookish. He never fully emerges as the haunted man who narrates this play’s famous opening and closing scenes.

This puts a reviewer like me – who adores this famous script, and enjoyed several scenes in this production – in a jam. I really wish I could recommend it unreservedly – but some scenes could have been better. If you’ve never attended “The Glass Menagerie” in person – and that will include most listeners hearing this review – you probably ought to give it a try anyway, because seeing this semi-successful production is undoubtedly better than never experiencing “The Glass Menagerie” at all.

Show times and tickets for "The Glass Menagerie are available here.

Hear more about Tennessee Williams in this NPR story from 2007, with readings from the playwright's own journals. 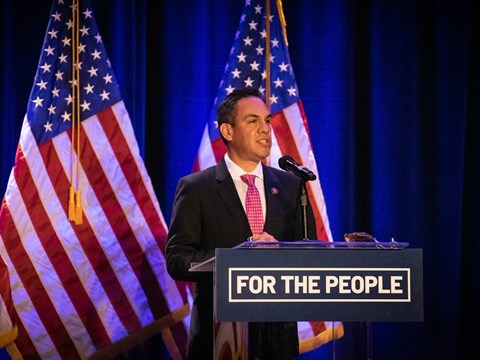