Dispatch From The Field: Julia Mitric On A Quest To Understand Bee Die-Off

Food and sustainability reporter Julia Mitric is on a quest to understand how and why California bees are dying off in droves. Join Mitric as she talks with agriculture experts to gain insight on the epidemic. (Scroll down to Dispatch #1 to start from the beginning.) 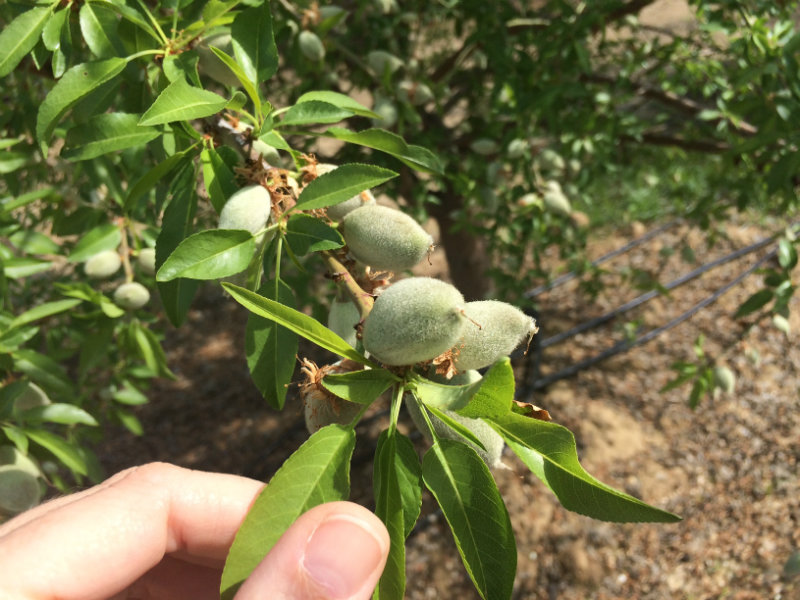 A close-up of an almond tree in an orchard outside Sanger in eastern Fresno County. Julia Mitric / Capital Public Radio 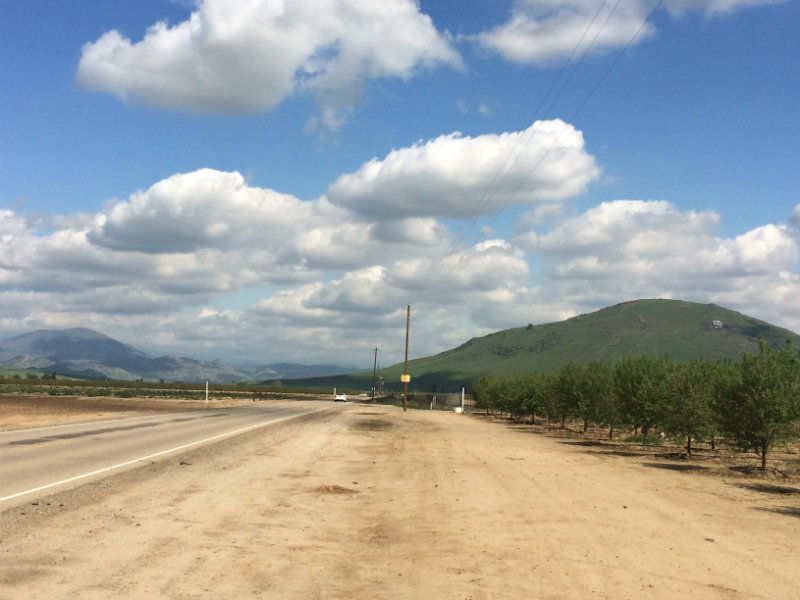 The edge of an almond orchard outside of Sanger in eastern Fresno County. Julia Mitric / Capital Public Radio

A hunch that turned out to be wrong led me to my last stop on this reporting trip. I drive towards almond orchards east of the town of Sanger in eastern Fresno County.

For several days I'd been trying to identify a bee keeper whose colonies were hit by the bee deaths.

After calling the California State Beekeepers Association, bee keepers, brokers, local growers and academic bee specialists -- I had zero leads on a local bee keeper connected to the bee deaths.

Timing is everything. And now that almond pollination is over for 2017, bee keepers (or bee brokers) have move their colonies to bee yards until it's time to get them into place for the next bloom - perhaps prunes.

So I asked myself, what did reporters do before Wi-Fi, before browsers and smart phones, before social media and GPS?

Oh yeah, I remember, my mother was a print reporter back in olden times. She once told me they just showed up to places and talked to people and tracked down sources through word of mouth...or knocking on doors.

So, I told myself, why not try that?

I chose Sanger because multiple sources told me the other bee kill sites were concentrated in that area. Before I set out, I checked the Fresno Agricultural Commissioner's bee map of registered colonies to get a rough sense of where they look. (Yes, I cheated with technology, but the mapping tool doesn't provide actual addresses.)
As I drove east the sky opened up and the clouds spread out across the wide expanse. As I put the town of Sanger behind me, I passed orchard after orchard of neat almond trees, walnuts and grapes. Farmsteads were sprinkled between the fruit and nut crops, cows and horses in between. I saw signs saying "Hay For Sale" and "No Trespassing" and a tractor way off in the distance.
But I knew I'd come really far from home when the farmlands opened onto a grand view of hills and mountains -- that must be Kings Canyon National Park in the distance.
Not many people around to talk to. No farmers or farm hands in sight. No bee boxes or bee keepers.
No one to ask: what went on here? When tens of thousands of bees died across 5,000 colonies, what did it mean for your bee keeping business or your neighbor's crops?
Stumped by my unanswered questions, I pulled over to the side of the road by another massive almond orchard. I walked along a row of trees and touched the velvety, pale-green almond shells forming on the trees.
Regardless of what happened (or didn't happen) to the honey bees that died in great numbers in February, it seemed clear these almond trees were moving on with their next cycle. Nature doesn't stop while we puzzle through what happened.
As I turned to get back in my car, a single honey bee buzzed through the air just behind my shoulder. I know. It literally sounds like a scene from an '80s after school special - cue symbolism - but it did happen.
When I failed to interpret the secret meaning of the bee's arrival at that moment, I made something up. I told myself (and the bee) I would just keep exploring this story till I found some satisfying answers.
The elements of this mystery will likely come together much more slowly than an airport detective novel, but ultimately things will fall into place. That's what we journalists like to tell ourselves, anyway.
I'll keep you posted when I find a good ending to this story.

This afternoon, I visited Matthew Efird, an almond grower in the Caruthers area of Fresno County who also cultivates walnuts, wine grapes and raisins.

I sought out Efird's perspective on the grower/bee broker relationship because he has nothing to do with the recent bee deaths in Fresno. But he's very familiar with how growers and bee brokers (or beekeepers) work in tandem. 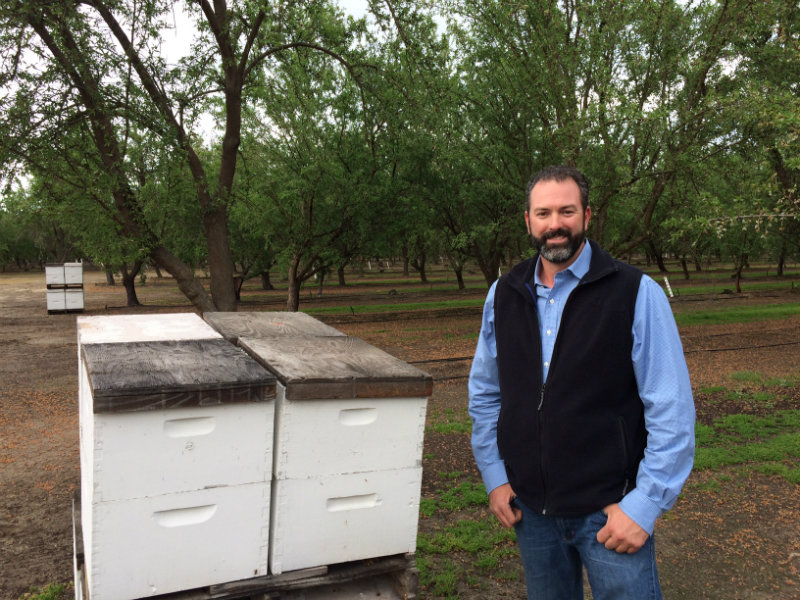 Almond grower Matthew Efird is standing in his almond orchard by some of the bee hives brought in by a bee broker for almond pollination (now finished). Julia Mitric / Capital Public Radio

Efird says his family has a thirty-year history with their bee broker. Every year, they go over bee hive site locations at least two months before almond pollination season begins. They plan to have the honey bees placed in orchards at least a week before bloom so the bees can acclimate to their new surroundings.

Efird says he relies on his bee broker (who's also a bee keeper) to check the health of the bees before they're shipped and they check them again together after they've settled in. They assess the health and strength of the hives. It's a lot of back and forth to make sure everyone's on the same page.

In short, in Efird's experience, it's team work.

Now, at the end of the day, I'm mulling over just how many players are involved in making sure honey bees are in the right place at the right time so they can pollinate California's almond orchards (not to mention plums, nectarines and other crops).

There are the growers who rely on healthy bees to pollinate their crops. Then there are bee keepers (apiarists) who may work through bee brokers, the folks who figure out where bees will be placed at pollination time and when/where to move them. Many of the honey bees themselves are traveling to California from as far away as Texas and South Dakota. Then there is a person who's known as an Agricultural PCA (Pest Control Advisor) who advises growers about which pesticides are needed in the orchard or vineyard. Then there are the county Agricultural Commissioners whose role is to make sure county players adhere to CDFA rules.

All of these folks operate in relationship to one another. So, they talk to each other, right? But what happens if that communication loop breaks down somewhere along the line? What if players don't convey crucial information? Could a break like that have played a role at the sites where large-scale bee deaths occurred?

In talking with Efird, we both wondered aloud, where did that breakdown occur (if it did) and what lessons can be learned?

It may take awhile before we know if a communication gap had anything to do with bees dying in Fresno.

But it's certainly one hunch I plan to pursue in my reporting as The Case Of The Dead Honey Bees continues.

My first stop in Fresno was the County Agricultural Commissioner's office where I met "bee investigator" Tom Ullmann. A makeshift bee map is taped to his wall. Ullmann pointed out four sites on the grid of roads in the western part of Fresno County - each one represents a location where honey bees died. 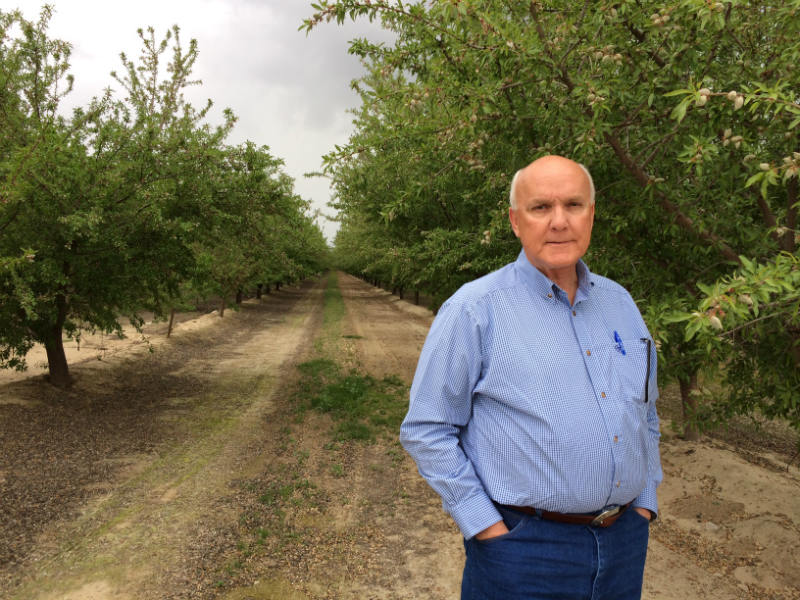 Tom Ullmann with the Fresno County Agricultural Commissioner's office stands in an almond orchard in western Fresno County, near where dead bees were found mid-February. He's part of the investigation into what happened to the honey bees.  Julia Mitric / Capital Public Radio

But there's another bee map that's key to this story. It's an online map kept up by the Fresno AG commissioner's team. Ullmann says bee keepers and bee brokers are supposed to register their hives as they place them in the fields. (The registration costs ten dollars.) By CDFA rules, growers, in turn, must contact the AG commissioner to say they intend to spray in a given area. Ullman and his colleagues check the online bee map and let growers know if there are any bee hives registered within a one-mile radius of the planned spray. If so, the grower must contact the registered bee keeper (or broker) and let them know when the spraying will happen so that they have time to cover or move the bees. (Ullmann says there are CDFA rules that keep growers from spraying during the day when honey bees are out and about.)

Next, we head out into the orchards to see the site.

As we drive over, Ullmann tells me he never expected his new role with the Fresno Dept of AG to feel like an episode of CSI. Yet now he's part of a team preparing samples of dead bee bodies found at this site in February. In addition to dead bees, they're also prepping swab samples from the outside of the bee boxes. It's like forensics. Over the next few days, samples will be sent to the CA Department Of Pesticide Regulation, which will assess whether lab tests should be run to find out what chemical residue is present on the samples.

Ullmann says the Fresno County AG Commissioner takes the role of researching and investigating the bee deaths very seriously. But he adds, "so far in this instance we've not found any instance of anything that was non-compliant with regulations." There were permitted pesticide applications that happened within the time frame of the bee deaths. But they didn't happen in the almond orchards where the bees were. Looking at the four sites in western Fresno Ullmann is tasked with investigating, he says no bee hives were registered within the relevant area.

So, dear reader... that leaves the open question: what led to the bee deaths if only permitted (night time) sprays took place within a 1 mile radius of the bee hives?

Dispatch #1: About This Project

Food and sustainability reporter Julia Mitric is on a quest to understand how and why California bees are dying off in droves. Join Mitric as she talks with agriculture experts to gain insight on the epidemic.
"As I pass Manteca, Highway 99 is flanked by orchards and vineyards on the eastern side and a Union Pacific train rolling by on the western side," says Mitric. "I'm heading to Fresno to track an investigation into a massive bee die-off that took place in February just as almonds were set to bloom."
In Fresno, Mitric will go out in the field with an investigator from the Fresno County Agricultural Commissioner's office. Bee pollen and other evidence in the epidemic will be sent to a lab to determine what chemicals honey bees were exposed to that caused their deaths.
Tens of thousands of bees (or more) died in February and the cause of death is still a mystery, according to Fresno County Deputy Agricultural Commissioner Stace Leoni.

But those labs are merely one piece of a complex puzzle. The bee die-off could also be linked to a communication gap between bee brokers placing hives and growers applying approved pesticide spray.