The evacuations caused by the Oroville Dam Spillway emergency have been lifted for most areas of Yuba and Sutter counties.

The Evacuation Advisory has been lifted in Yuba County.... https://t.co/t918TT8cjc

Advisory evacuation lifted in Yuba City, Live Oak, all other areas of Sutter County except for Meridian and Robbins basins along Sac River

Officials are providing another update on the Oroville Dam Spillway repairs at noon.

One of the spillway gates on the Don Pedro Reservoir remains open Tuesday. Engineers opened the gate as the reservoir reached its capacity. Approximately 16,000 cubic feet per second is pouring out of the spillway to the Tuolumne River.

Officials say they anticipate that forecasted precipitation will continue to impact the reservoir in the coming days.

Showers over the holiday weekend drenched Northern California, causing concern for waterways and levees across the region.

David Rowe is a meteorologist with the National Weather Service in Sacramento. He says the storm impacts will continue after the weather system passes.

"The flooding impacts are probably going to continue even with the dry weather here for the next few days as the runoff from yesterday's storm works its way downstream," says Rowe. "So even though the sun will come out, we'll be facing the high water."

Over the weekend, Sacramento saw more than an 1.5 inches of rain. Some parts of Eastern Butte County and Plumas County in the foothills saw almost six inches of rain. The weather service is forecasting a mostly dry week with another storm arriving Saturday evening.

Near Manteca, an evacuation order remains in place Tuesday morning though San Joaquin County crews have stabilized a breached levee along the San Joaquin River and at least temporarily halted the leak.

Forecasters say a flash flood warning is in effect. Monday's levee break prompted an evacuation order for about 500 people living in mainly ranch and farmlands.

Water had been backing up almost to the top of the levees before Monday's downpour. 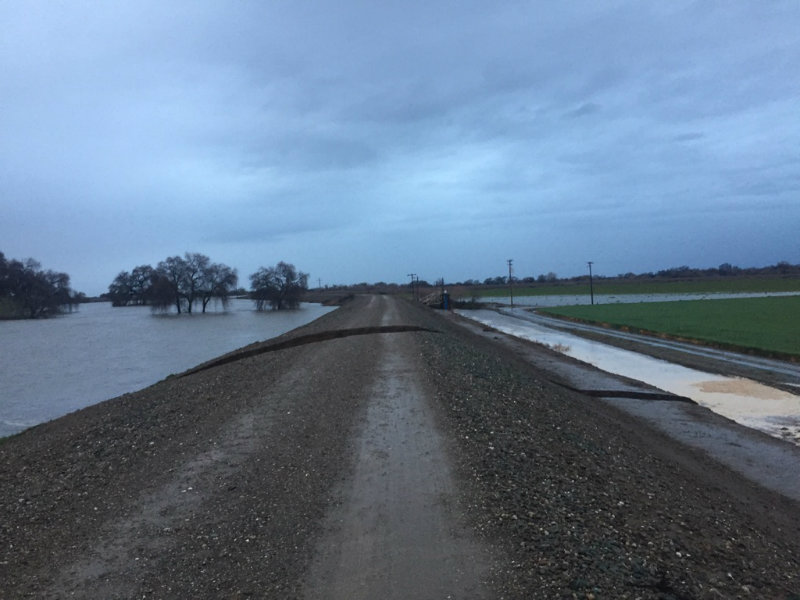 The latest atmospheric river storm that drenched the Sacramento region is dumping lots of snow in the Sierra.

"We're expecting another foot or so around the 5,000 foot elevation mark, and maybe some of the ski areas will see upwards of 18 to 24 inches by the time the showers start to wrap up later (Tuesday) evening," says David Rowe, a forecaster with the National Weather Service in Sacramento.

CHP officials are warning motorists of travel delays on westbound Highway 50 east of Bridal Veil Falls. Authorities say the shoulder lane is buckling and Caltrans crews are attempting to fix it. One lane remains open.

Update 7 a.m.: California waterways swell to near or above flood levels

The storm that inundated much of California has begun to weaken. It brought heavy downpours Monday that swelled waterways already near or above flood levels. About half the state has been under flood, wind and snow advisories.

Forecasters have been describing the system as an atmospheric river of moisture blowing in from the Pacific. In Sacramento County, two voluntary evacuation notices are in place for people living near the Cosumnes River at Michigan Bar in the Wilton area and Dry Creek in Rio Linda.

Meanwhile, in the Sierra, motorists are being warned of travel delays on westbound Highway 50 east of Bridal Veil Falls. Authorities say the shoulder lane is buckling and Caltrans crews are attempting to fix it. Eastbound lanes will be reduced to one help facilitate westbound traffic.

Scattered showers are expected Tuesday in Northern California - and it comes as a relief a day after the latest downpours to hit the already-soaked region.

Creeks and rivers topped their banks and hundreds of homes were evacuated near Manteca Monday after a levee breach along the San Joaquin River. Work crews have stopped the leak. No reports of damage or injures.

In Sacramento County, two voluntary evacuation notices are in place for people living near the Cosumnes River at Michigan Bar in the Wilton area and Dry Creek in Rio Linda.

Original Post: No immediate reports of damage due to levee breach near Manteca

Work crews have stopped a leak in a levee near the town of Manteca in San Joaquin County but about 500 people remain under evacuation orders until the area is deemed safe.

There are no immediate reports of damage or injuries but a flood warning remains in effect. The levee on the San Joaquin River was breached Monday afternoon and repaired about five hours later.

The evacuation area is mainly farming and ranch land. 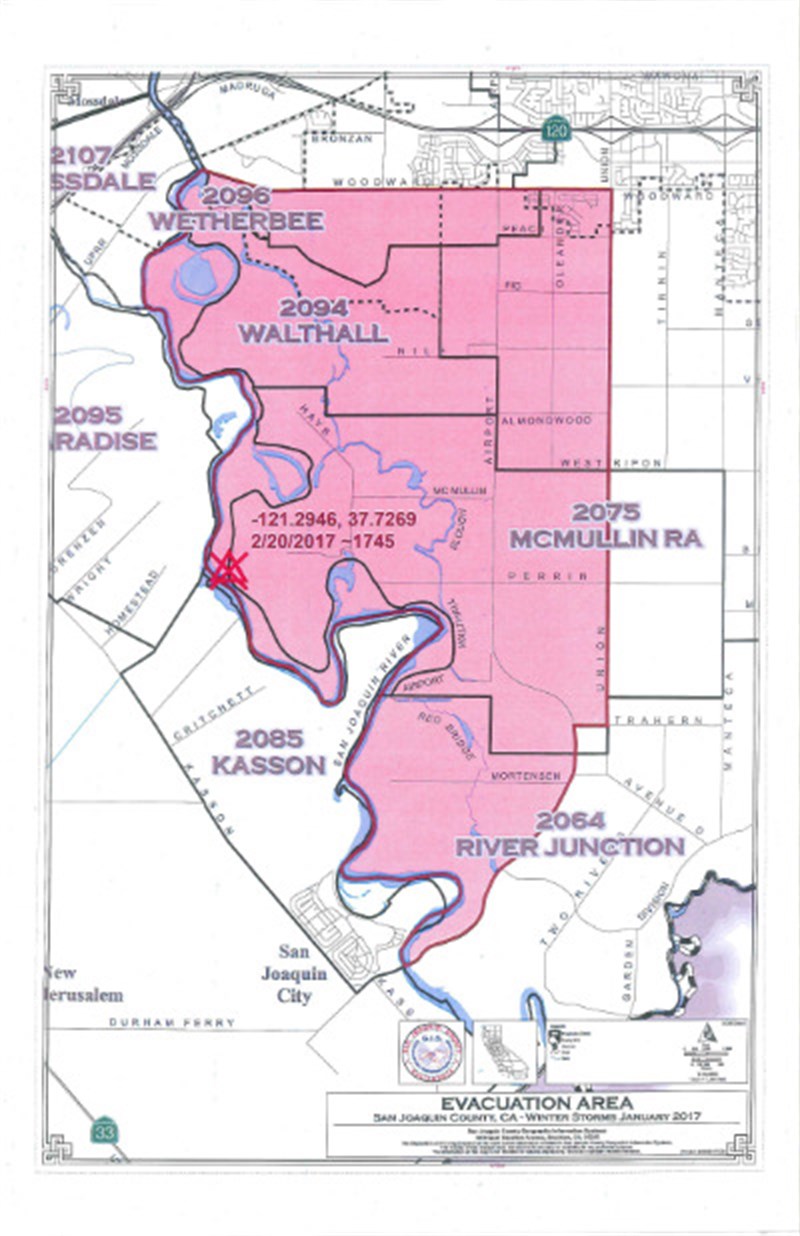 A Red Cross evacuation center has been set up at the Lathrop Community Center, 15552 5th St. in Lathrop. Meanwhile, the Manteca Animal Shelter can hold small pets at 115 E. Wetmore St.

Rivers and creeks throughout Northern California have been reaching flood levels as a series of storms continues to pound the region. In Sacramento County, two voluntary evacuation notices are in place for people living near the Cosumnes River at Michigan Bar in the Wilton area and Dry Creek in Rio Linda.