The trucks are extending the lip of the emergency spillway.

The Department of Water Resources continues to release water at a rate of 65,000 cubic feet per second. That's a little less than half the volume of water entering the lake.

The emergency spillway has never been used, even in 2013 when Lake Oroville reached 900 feet in depth. It holds 901 feet.

As of 10:30 a.m., officials are saying the emergency spillway may not have to be utilized if current releases are maintained.

UPDATE, 8 A.M. Feb. 10: In Butte County, more water is rushing down the badly damaged Oroville Dam spillway Friday. Officials are trying to manage the flow so that an emergency release from Lake Oroville, the huge reservoir behind the dam, won’t be necessary.

California state engineers say the damage does not threaten communities downstream even as Lake Oroville continues to fill with water.

CapRadio's Bob Moffit says the Department of Water Resources will increase water outflows from Lake Oroville to 65,000 cfs at around noon Friday. 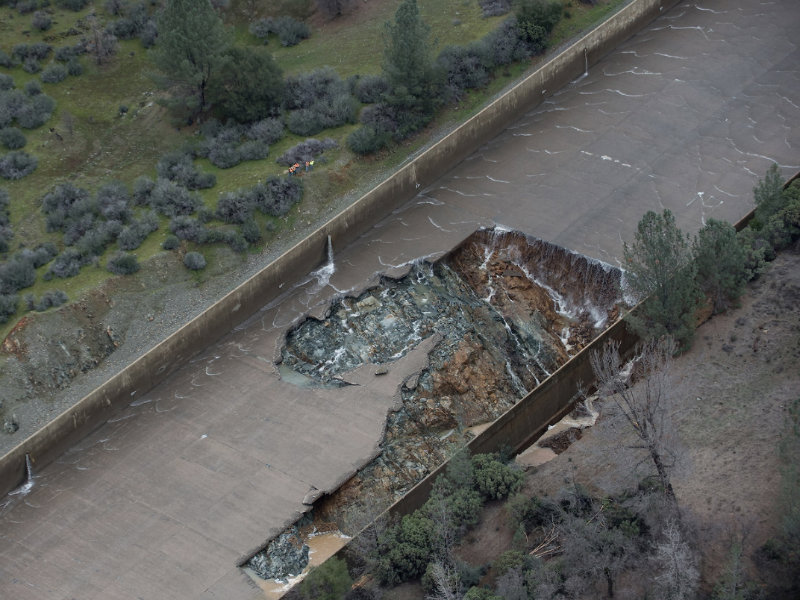 A photo of the damage spillway at Lake Oroville.

Original Post: Engineers at Lake Oroville are releasing water over the reservoir's quickly-eroding spillway in an effort to maintain flood control measures.

It's flowing at a rate of 35,000 cubic-feet-per-second, but the lake that's already more than 90 percent full, is filling up much faster than that.

Inflow Thursday was measured at more than two-to-three times the release rate.

A massive gash in the spillway's concrete has grown dramatically since the gates were reopened yesterday, spurring some on social media to claim the spillway has completely collapsed.

Department of Water Resources spokesman Doug Carlson says that is not the case.

"It has not collapsed, contary to the rumor." says Carlson. "It has been increasingly damaged by the heavy flow of water coming down, that was anticipated. It must be emphasized, the dam is not in danger, its integrity has not been compromised."

That topsoil has so muddied the waters downstream that salmon at a nearby fish hatchery are being moved by tanker trucks to another location.

The goal for operators right now is to release enough lake water to avoid using an emergency spillway that's nothing more than a hillside lined with trees.

Schools were closed Thursday as a precautionary measure in Oroville, Palermo and Thermalito because of high lake levels.