Underdog Amador Buffaloes Making The Most Of Their Opportunity

Every Amador Buffaloes game and practice starts with a single thought:

Reese Gilmore is the leader of this family and is the team captain. He had three quarterback sacks last week as a 5-foot-6, 160-pound nose guard who takes on offensive lineman seven inches taller and 100 pounds heavier.

Gilmore says he and his teammates are used to being the underdogs, but they've always dreamed of coming out winners.

"Ever since we've played in Nuggets, which is the mighty-mite league, we've always had a losing record every year," Gilmore says. "And then, our sophomore year, we finally had a winning record, and then this year, we're just, we're going great. We never thought it would happen, but we're so excited that it finally happened." 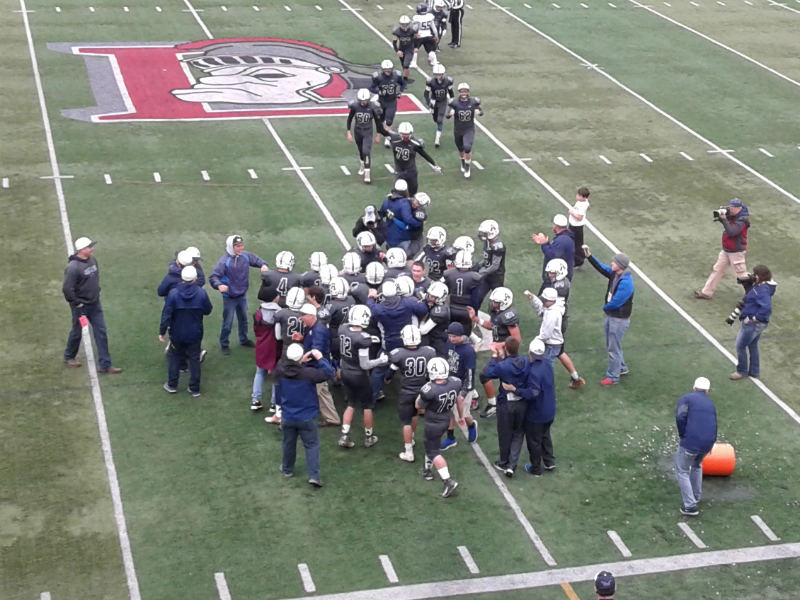 Last Saturday, Amador High School's football team won the first section championship in the school's 105-year history. The team is a source of pride for the people of Amador County who are doing whatever they can to support a group of kids —some of whom have been playing together dating back to peewee ball but never expected to make school history or to be two games away from playing for a state title. Bob Moffitt / Capital Public Radio

And the community is excited. Before last week's game, they held a rally and bonfire to raise money to send the team to the game on a charter bus. 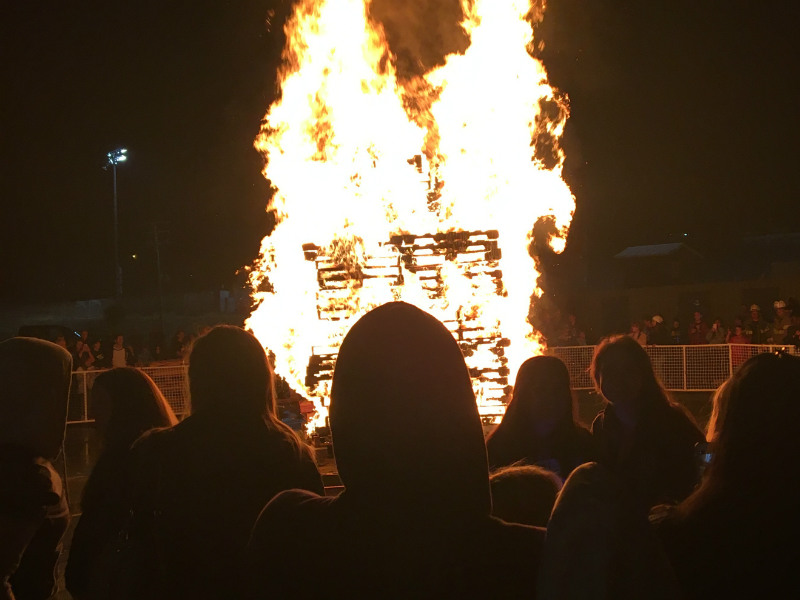 Amador County turns out for a rally to support the Amador Buffaloes football team prior to taking on Bradshaw Christian in a CIF Sac Joaquin Section Division VI game. Amador won the game 30-7. Kim Martin / Courtesy

"Oh, we have an amazing community just to come out. Our crowd last week was double, triple the opposing team's crowd," says starting free safety and wide receiver Eric Moreno.

When the Buffaloes won, parents used social media to raise money for a bus and hotel for Saturday's playoff game in San Francisco.

Kim Martin's son, Dustin, is a linebacker on the team. She says it took less than a day for residents, family and alumni to donate more than $10,000.

"I knew that people were going to be generous and were going to donate," Martin says. "I thought it was going to take a lot longer than it did to get that money because we are a school of about 600 people."

She says one alumni was particularly generous with donations totaling nearly $1,800 and he doesn't even have kids going to the school.

Head Coach Bill Baker says the community's generosity and positivity have been "wonderful" and the kids have responded.

"They're hard workers," Baker laughingly says. "They have a great sense of humor, tremendous energy when it's channeled correctly. They're fantastic to be around and there's questions when that happens, to be honest with you. But, it's fun. It's a small high school. They're having a good time, the way it should be." 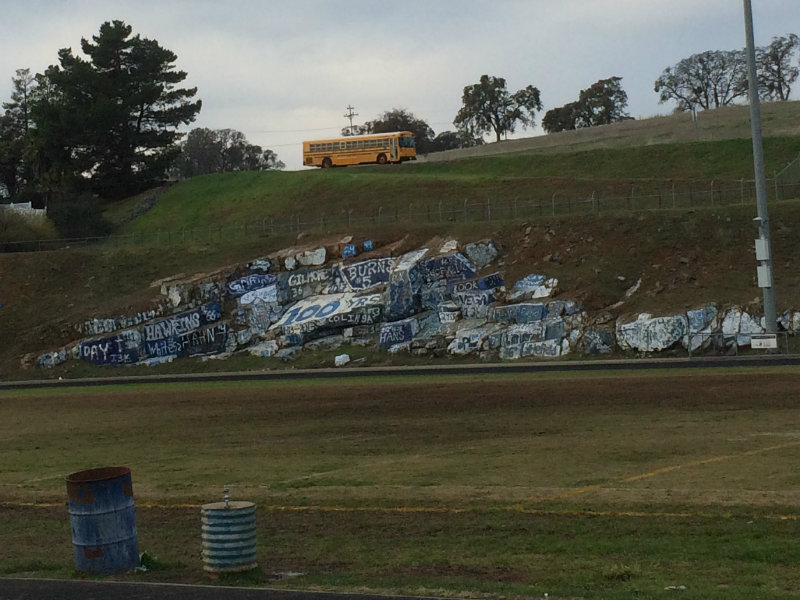 The coach says he expects effort.

Baker himself grew up in Plymouth and played defensive back and running back at Amador High in the early 80s, using his one good hand to carry the ball. He returned as an assistant coach in 1988 and was then hired as a teacher three years later.

Some of the players on the 1988 playoff team are on his staff today.

The players come from all over Amador County: Sutter Creek (population 2,500), Plymouth (population 970), and Drytown (population 170), among others.

Gilmore's an electrical contractor and runs a business called Short Circuit Electric that his dad started 40 years ago. He says the recession hit this area hard.

He says he considers the kids part of the family.

"The boys that are playing? I coached them when they were eight all the way to high school and so, they're like my kids. I just like being around 'em."

Every Thursday morning during the fall, Gilmore's father would get up early and prepare dinner for the players and coaches after the last practice before that week's games.

"We got a smoker —a big 250-gallon propane tank that I turned into a smoker. So, we've done ribs, tri-tip, pork shoulder, hamburgers," Bryan Gilmore says. 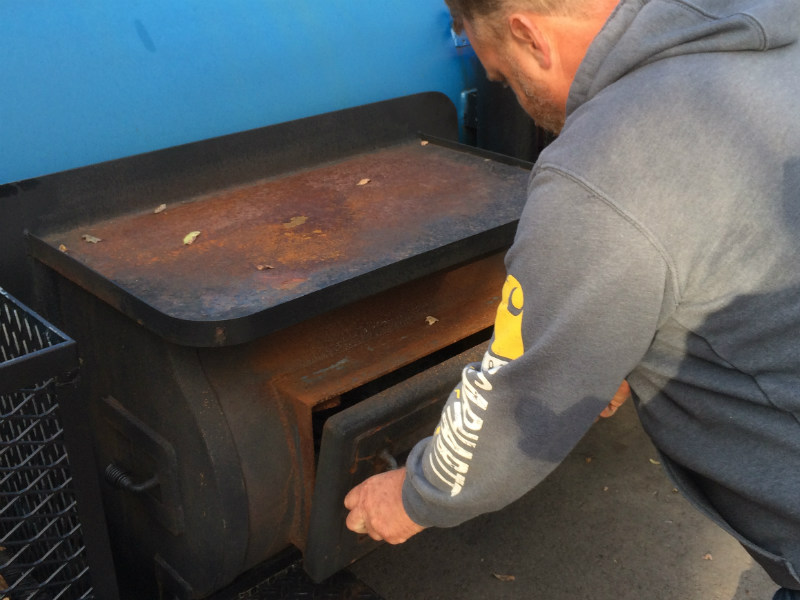 Amador High alum and parent Bryan Gilmore cooks dinner in a home-built smoker every Thursday throughout the football season. He is cooking at least one more meal than in previous years as Amador continues to win postseason games. Bob Moffitt / Capital Public Radio

As for the Thursday night barbecue, Bryan Gilmore stayed true to form, to the relief of his son.

"This week, I thought we weren't gonna do it," Gilmore says. "But, I talked to my son and he says, 'Dad, you'll ruin us! You'll jinx the whole team if you don't cook for the team!' "

Asked if his son was looking for ways for dad to do more work, he says as a reply, "That's right, but I don't mind. I'll do it all day long for the boys."

Amador will play at Lincoln High School in San Francisco at noon on Saturday.

The football team is not the first Amador team to win a section championship. The girls cross-country has won three and the girls soccer teams have won two in the past four years.