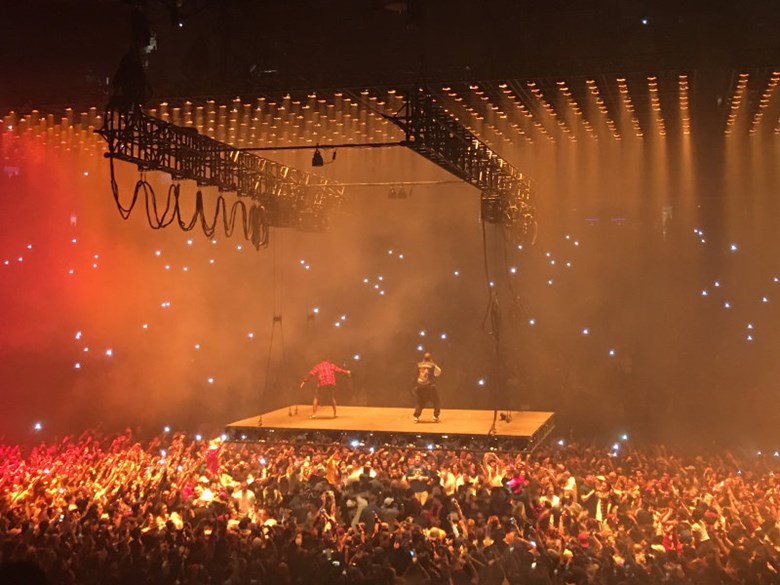 Update 7:32 p.m.: Golden1 Center announced Sunday afternoon that tickets would be refunded at the point of sale for Saturday night's Kanye West concert that the artist cut short.

After coming on stage more than an hour late and performing only briefly, West went into a 20-minute rant before walking off.

The venue said that all original ticket orders through Ticketmaster.com or by phone would be refunded in full automatically -- except for shipping charges -- and the refunds should come through within 5-7 days.

Original Post: After coming on stage more than an hour late and playing two songs, rapper Kanye West launched into a 20-minute tirade about the music business, Beyoncé and politics at his Sacramento concert Saturday night.

“Beyoncé, I was hurt, because I heard you said you wouldn’t perform unless you won video of the year,” West rambled from the floating stage above the crowd. “We are all great, but sometimes we be playing the politics too much and forget who we are.”

Warning: This video contains a lot of explicit language.

About 15 minutes into the rant, the crowd started to boo as West silently paced on the elevated stage.

He ended it with, “Get ready to have a field day, press, get ready, get ready, because the show’s over.”

Sacramento fashion blogger Kachet Jackson-Henderson attended the concert and said even though West was late, the show started strong.

“The place was packed, fans were starting to chant his name… he came out singing one of his newer songs,” says Jackson-Henderson. “His fans were hysterical.”

After about two songs West launched into a rant. Jackson-Henderson says this didn't surprise her.

“I expected a rant after seeing what happened at the San Jose show. I had no idea the contents were going to be so scattered and irrelevant to what the actual show was about,” she says. “Even though Kanye has had a track record of pulling stunts like this - you always think it’s not going to happen to you - it’s not going to be the show you’re going to.”

Jackson-Henderson and her boyfriend left after the music stopped and the bright lights came on.

“I did hear from a few others that people started throwing things into the general admission area and getting really angry,” she says. “I walked away pissed. I thought that was super disrespectful to your fans ... He has absolutely lost all of my respect and I am going to not be supporting him in the future.”

“We encourage all guests to travel home safely. More information to follow.”

Jackson-Henderson says she did recieve the full refund for the cost of the tickets.