A memorial continues to grow for a Marysville boxing trainer who was shot to death outside of his gym and in front of his eight-year-old son Wednesday.

Flowers, candles and pictures for Taj Fields fill a small stoop outside the Hit Squad Boxing Center at Willow and 4th Streets in Marysville. 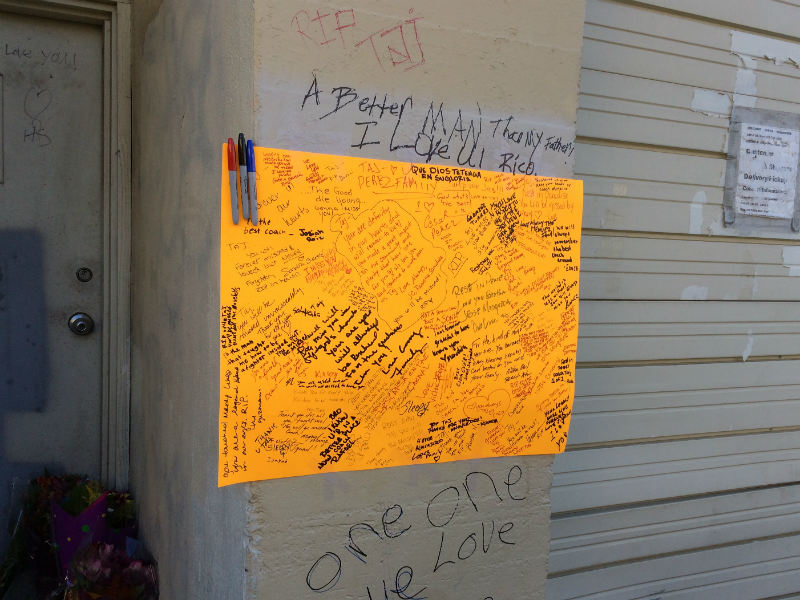 Dozens of people have lit candles and signed a card for Taj Fields, a boxing promoter who was shot and killed in front of his young son Wednesday night. Bob Moffitt / Capital Public Radio

Roman Zarate, who trained under Fields as a teenager, and then served as an assistant coach, was arrested for the shooting.

Raphael Zarate stood outside the gym this morning and held back tears as he described the man who once trained his son and who tried to help many others turn their lives around.

"This was his dream right here. Help all these kids, pull them out of the streets, give them second chances. It doesn't matter if you didn't have money to pay, he welcome you in, you came out of juvenile hall or jail, he bring you in, in the streets he bring you in. He always gave everything he had."

Raphael says he assisted Fields for six years, but hadn't recently. He says he has already contacted Fields' family to volunteer his time if needed.

"All he had was his heart. It was a great, great heart on this man. And he didn't hold back. He gave it up to everybody and he taught me a lot. I'm just very very very very lucky to be (chosen) by him to be one of his coaches."

There has been a steady stream of people who have come to pay their respects. 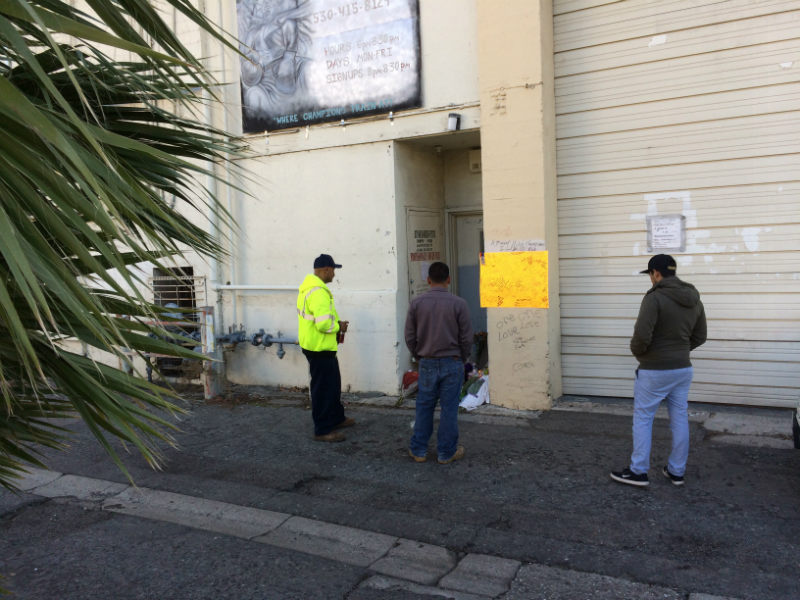 Raphael Zarate, Keo, and Marcelo Hernandez pay tribute to a man they say did his best to help his community. Bob Moffitt / Capital Public Radio

One man who gave his name only as Keo, was here by himself this morning and with his five-year-old son last night.

"I brought him down here at 6 o'clock knowing that everybody knew that 6 o'clock is the time boxing starts and to see all the families come down here and show support. I was amazed," Keo said. "It was pretty nice to see all the support. The parking lot was full.  The streets were full. People were parking across the street and just kept coming to show their love for the family and their respect for Taj."

Keo says he will continue to bring his son here for training, if Fields' family decides to keep the gym open.

For now, he is having a difficult time processing the irony of the situation, that a former student is charged with killing the man who dedicated his life to helping others.

"This is hard to believe. I'm still in disbelief."

The Marysville Police Department have not identified a motive for the killing.