Correction: Our original story stated that the poll sought to capture the sentiments of all Californians rather than likely or registered voters. We based that statement on information provided by the Institute for Social Research at Sacramento State, which conducted the survey. While most of the poll's questions were asked of a representative sample of Californians, the poll's author later informed us that only the responses of registered voters were used for questions about the November election, including the U.S. Senate race and Proposition 64. We have updated our story and apologize for the error.

More than half of registered voters, 51 percent, say they would vote for Harris in a new poll commissioned by the California Counts public media collaboration. Just 19 percent favor Sanchez.

“There’s no split where Sanchez is leading,” says Kim Nalder, the political director for the CALSPEAKS Opinion Research Center at Sacramento State, which conducted the poll. “She gets 29 percent from 29 to 34-year-olds. That’s one of her high numbers, whereas Harris is getting a majority in a lot of the subcategories.”

Republicans were the most likely to not have their minds made up in the race. Thirty-six percent of GOP voters were undecided.

Both Harris and Sanchez are Democrats. This is the first time two members of the same party have faced each other in a statewide runoff since California adopted the top-two primary. They are running to replace another Democrat, retiring U.S. Sen. Barbara Boxer. 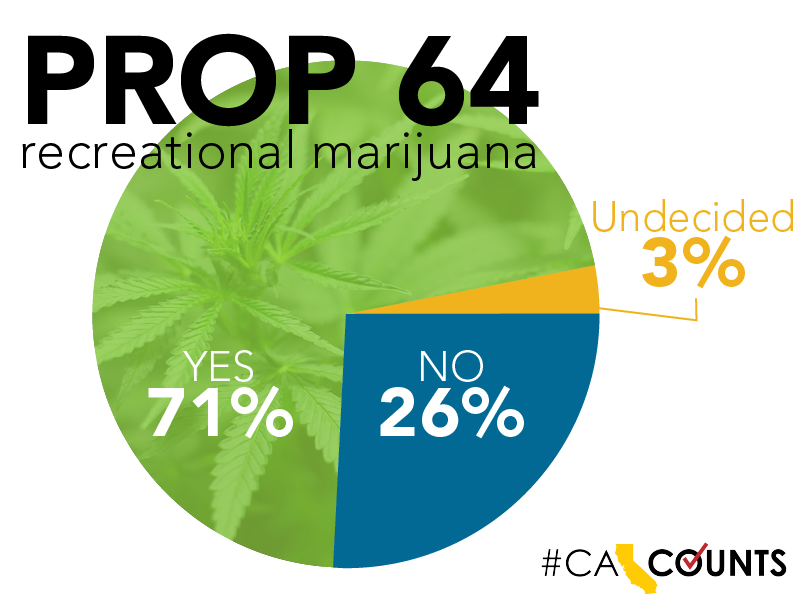 The poll also asked registered voters' opinions of Proposition 64—the November ballot initiative that would legalize recreational marijuana. It found 71 percent in favor of legalization, with 26 percent opposed.

But support for marijuana legalization could decrease somewhat as initiative campaigns begin in earnest. Nalder says a majority of Californians initially supported legalization in 2010, but voters turned against details in Proposition 19.

“People thought it wasn’t prudent in a lot of ways. And so even though there were a number of voters who were generically in favor of legalizing marijuana, they voted against it,” says Nalder. “I suspect [this year] most voters haven’t gotten out their ballot guide yet and done their homework, and so it could change if they don’t like some of the details in this one.”

The Institute for Social Research at Sacramento State fielded the survey online and through the mail from August 15 to 24, 2016, using the CALSPEAKS survey panel. It yielded 915 completed surveys and 44 partially completed surveys. CALSPEAKS obtains a representative sample of Californians, stratified by the five major regions in the state. For information on the methodology, please visit:  http://www.csus.edu/isr/calspeaks/index.html

For questions about the November election, (the U.S. Senate race and propositions 57, 63 and 64), results reflect registered voters only. The margin of error for any individual survey question is equal to or less than +/- four percentage points, for the overall sample. However, the margins of error are larger if focusing on smaller sub-groups, especially racial or ethnic sub-groups. These are equal or less than +/- 16 percentage points for African Americans, and 10 percentage points for Latinos or those of “other races/ethnicities” (including Asian-Americans, Pacific Islanders, Native Americans, and those of mixed race/ethnicity). The numbers, however, have been weighted to reflect California’s population and are valid for comparisons across the sub-groups..

Respondents to the marijuana legalization ballot measure were erroneously asked about “Proposition 65,” although the actual ballot measure is Proposition 64. Respondents have been re-contacted so that they are aware of our error. The authors of the survey are confident this error does not affect the accuracy of the results.