Update Sept. 1, 8:31 a.m.: The California Legislature has adjourned for the year, but not before a flurry of action on Wednesday, the final day of session.

Lawmakers passed bills to require the installation of water sub-meters in new apartment and condo buildings and create a state-run retirement program for private-sector workers.

They also approved a measure that seeks to curb short-lived climate pollutants like methane, despite strong opposition from industry groups.

But they rejected a bill that would have doubled the hourly pay rate for large grocery and retail store employees who worked on Thanksgiving.

Governor Jerry Brown has 30 days to act on the bills that reach his desk.

Update 1:54 a.m.: An effort to overhaul the California Public Utilities Commission fizzled in the state Legislature on the final night of session.

The bill would have reorganized the embattled state agency that regulates gas and electric utilities, phone and cable companies and the taxi and ride-hailing industries, by moving some of its functions to other state departments.

The bill failed despite support from members in both parties. It needed a majority vote to pass, but it first needed a procedural approval that would have required a two-thirds vote, and not enough senate Republicans were willing to approve it. Negotiations to find another path for the bill went on well past the midnight deadline, but those talks failed as well.

Other bills that seek to make changes at the commission did reach the governor's desk. One would require the disclosure of private communications between commissioners and lobbyists. Another would make more CPUC documents available to the public. And a third would create a new safety investigator.

Update 11:50 p.m: California lawmakers have made it illegal to record and publish private healthcare conversations. The legislation, sponsored by Planned Parenthood Affiliates of California, comes after anti-abortion activists working undercover through The Center For Medical Progress produced a series of videos that purported to show Planned Parenthood officials selling aborted fetuses.

Assemblyman Jimmy Gomez calls the bill a fix to a “loophole” in current law, by addressing the harm created through disseminating information over the internet.

But media and civil liberties organizations say the measure is unconstitutional—that it would violate the First Amendment. The ACLU pointed out in its opposition to the bill that the same rationale for punishing disclosure of communications by healthcare professionals “could as easily be applied to other communications - e.g., by law enforcement, animal testing labs, gun makers, lethal injection drug producers, the petroleum industry, religious sects.”

Update 10:26 p.m.: Bartenders and others who serve alcohol would have to take a safety course every three years, under a bill headed to California Governor Jerry Brown. Responsible Beverage Servers Courses would have to last at least four hours. Non-profits serving alcohol at single day events would also have to send a representative to the course.

The California Legislature has voted to lift a ban on most cities and counties publicly-financing election campaigns. A bill that passed the Senate Wednesday would allow local governments to set up a fund, which would be available to all qualified candidates in an election. It also lifts the ban on state elections, although further legislation would be required to set up a fund for statewide campaigns.

Both chambers of the California Legislature rejected bills that would have restricted conversations between members of the state Coastal Commission and interest groups that have business before them. The legislation followed the commission dismissing its executive director in March. Environmental activists blamed the influence of developers for his firing.

Update 6:15 p.m.: A measure to eliminate surprise medical bills in California has passed the state Legislature. Lawmakers think they have a novel solution.

Say you go to a doctor in your insurance network, who draws blood and sends it to a lab not covered by your plan, well, insurance might charge you the higher, out-of-network cost for that blood work.

Democratic Assemblyman Rob Bonta says his measure would prohibit that.

"This bill provides the strongest consumer protection in the nation when it comes to surprise bills, and we hope that it will be a model for the rest of the nation to follow," he says.

The California Medical Association helped defeat similar legislation last year, but dropped its opposition after amendments raised the rates out-of-network doctors would receive and added a dispute process. Doctors are now guaranteed at least 25 percent more than Medicare would pay.

Other physician groups still opposed the bill, but it passed the Assembly unanimously and now moves to the governor.

The California Legislature has given final approval to a bill that would expand job-protected leave for new moms and dads.

The measure easily cleared the Senate on the Legislature’s final day of session Wednesday after a much tougher fight in the Assembly the day before.

“No parent should be forced to choose between the well-being of their new child and their family’s financial security,” the bill’s author, Democratic Sen. Hannah-Beth Jackson, told the Senate during debate.

But Republican Sen. Jeff Stone said California already has lots of family-friendly policies – and this would create yet another burden for businesses.

“This bill has been classified by the California Chamber (of Commerce) as yet another ‘job killer,’ in a state that does not have a good reputation for being business-friendly,” Stone said.

The bill would let new parents at companies with 20 or more employees take up to six weeks off. Current law applies to businesses with 50 employees and up.

Governor Jerry Brown vetoed a similar bill last year, citing concerns of a potential conflict between state and federal law. In his veto message, he said he’d be open to signing a new bill if it addressed that concern. 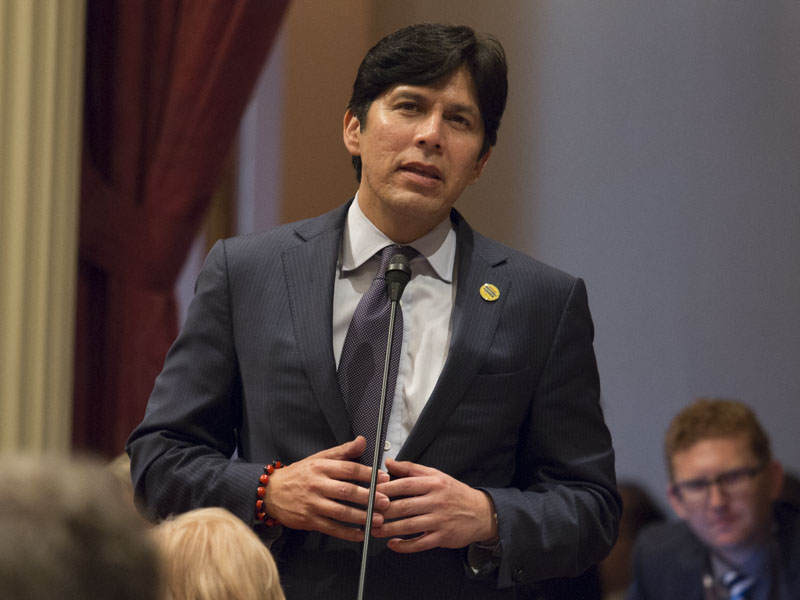 California lawmakers have reached a deal on how to spend almost a billion dollars on transportation and clean energy projects, with just hours left in the year’s legislative session.

The deal, which Governor Jerry Brown announced on his website, would spend $900 million the state has already collected through its cap-and-trade program but does not already automatically allocate to projects like high-speed rail. The state would continue to hold onto $400 million, which Brown called a reserve.

Amy Costa with the Governor’s Department of Finance noted it’s far less than the almost $2 billion Brown proposed in May.

"There are lower dollar amounts in this expenditure plan than what the administration originally proposed or what some legislative proposals originally contained," says Costa. "We feel it is prudent to have some amount set aside for future use, given the previous auction revenues."

Revenue from cap-and-trade auctions—where companies can purchase a limited number of credits that allow their carbon emissions—has fallen well-below state projections in the past six months.

$368 million to the Air Resources Board, which manages most of the state’s carbon-reduction programs. The funding includes $133 million funding for hybrid and zero-emission vehicle rebates from the state--which had been suspended--$150 million to decrease emission from heavy-duty vehicles and off-road equipment, and $80 million to help drivers retire heavily-polluting cars and trucks, which is especially targeted to low-income communities.

$135 million toward grants for local rail projects. California State Transportation Agency awarded funding to the projects earlier this month, including more than $100 million to the Los Angeles metro and $30 million to Sacramento for construction of a downtown streetcar. But, those awards relied on almost $400 million in funding. It was not immediately clear how the cap-and-trade deal would affect those projects.

Democratic Senate leader Kevin de León said the program would recycle some of those trees.

"This plan helps get timbers off the forest floors and to biomass plants that can make both clean energy and create jobs," says de León.

But, environmental groups and utilities oppose the provision. Kathryn Phillips of the Sierra Club said it could displace more efficient clean energy projects.

"It’s essentially a giveaway to try to allow about half a dozen dirty, older biomass plants to continue functioning in Northern California," says Phillips.

The deal also requires utilities to use some of those trees as biomass fuel and, specifically, to generate a total of 125 megawatts of energy from them. The proposal received the most criticism of any provision, during the bill’s brief Assembly committee hearing. Some opponents argued the funding will not make a dent in the number of dead trees, while others argued mandating that inclusion of biomass does not take into account whether communities will need the energy nor the cost of it on ratepayers.

The deal’s proponents emphasized the spending that goes to lower-income communities in California, which could help draw the support of moderate Assembly Democrats. The largest arguments between Democrats over the state’s environmental policies has been that regulations and additional fees more heavily impact those communities with less money, while more affluent areas of the state have seen the largest gains from clean energy investments. 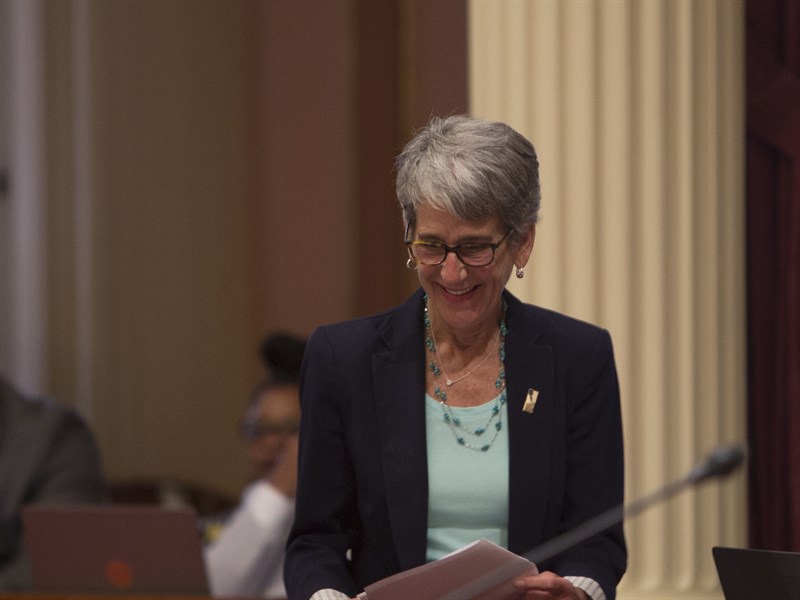 10:30 a.m.: The California Legislature faces a midnight deadline Wednesday to act on more than 100 bills, including about 85 in the Assembly and 45 in the Senate.

Both houses convene their final day of the current session at 10 a.m.

Here are some of the remaining high-profile bills:

On Tuesday, California lawmakers worked through more than a hundred pieces of legislation in advance of today’s deadline.

The Assembly voted to give diaper vouchers worth $50 per month to California parents on welfare, starting in 2020.

It also approved a bill that seeks to prevent the sexual assault of janitors – especially female immigrants. It’s in response to the PBS documentary “Rape on the Night Shift.”

The Assembly voted to ban state contracts of $100,000 or more with companies that illegally discriminate against sovereign nations. That bill is specifically aimed at boycotts against Israel.

The Senate approved a bill that backers hope will make it easier for California State University students to graduate on time. It would create a program to let CSU campuses enter into contracts with students. The schools would promise to provide Bachelor’s degrees to incoming freshmen within four years, or transfer students within two years.

These bills now all move to Governor Jerry Brown’s desk. He’ll have a month to decide whether to sign them.

*Editor's Note: The description for SB 654 has been modified to reflect amendments made to the bill.