She had been traveling in Europe and was stranded at the Istanbul Ataturk Airport on July 15 during an attempted coup by a faction within the Turkish military.

During the coup attempt, tanks rolled through the streets of Istanbul. Airports across Turkey were on lockdown.

Serrieh landed in Istanbul at about midnight Eastern European Time, just as the coup attempt was underway. Her connecting flight out was canceled as were hundreds of others.

She, her mother and a friend stayed the night at an airport lounge with little information, but with hope for a new flight.

The day after the attempted coup, passengers tried to get new flights out of the Instanbul airport. Joanne Serrieh / Capital Public Radio

She described sleeping under a table in case of further violence or explosions.

"It was the toughest 23 hours of my life," says Serrieh. "Imagine, 23 hours you're inside (a building) where it can blow up any minute or not knowing where you're going." 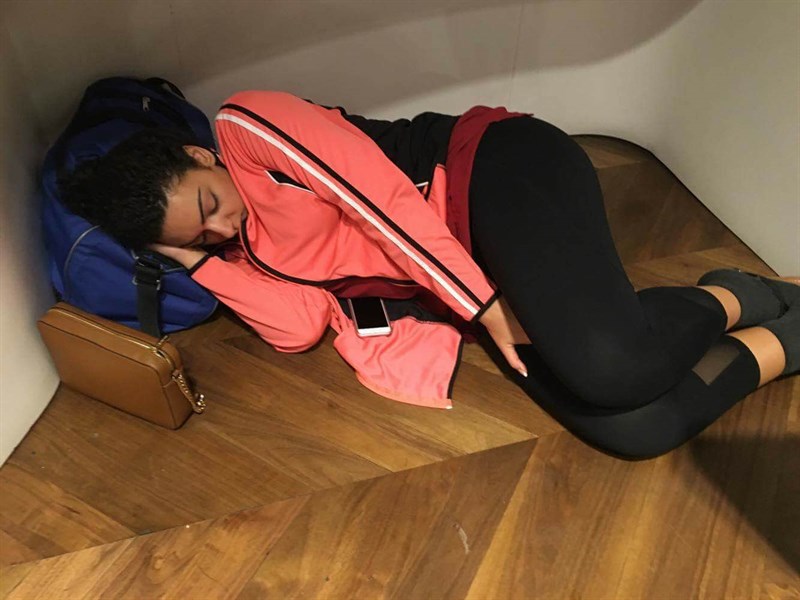 Serrieh and others slept under tables and in bathrooms. During the attempted coup Friday, passengers reported hearing explosions outside of the airport. Joanne Serrieh / Courtesy

Serrieh, ended up paying an employee under the table to book a new flight and is now in Amman, Jordan. She plans to stick to the rest of her travel plans and visit other parts of the country.

Marnette Federis contributed to this report.

UPDATE, July 15, 6 p.m.: Capital Public Radio Producer Joanne Serrieh says it appears flights from the Istanbul airport are being rescheduled, while some are cancelled.

Associate Press is reporting the military coup was unsuccessful.

Serrieh has been stranded in the airport for about four hours and doesn't know if people are yet allowed to leave. She did just hear a plane take off and then an explosion, but has not been able to see much.

CNN is reporting the Turkish president, Recep Tayyip Erdogan, has landed at the airport. It is also reporting low-flying military jets are causing sonic booms.

Original Post, July 15: Airports in Turkey are under lockdown as a military coup is underway. Capital Public Radio's Joanne Serrieh has been traveling in Europe. Her plane landed at the Istanbul airport about three hours ago.

She says passengers have been panicking.

"The first incident, people thought they heard gunshots and so people started running," Serrieh reports via phone. "And then that's when all of a sudden, we were sitting on a lower floor and then we see people just running down the stairs, running down the escalator, it was just a wave of people. And then we go down into another lounge and then we're sitting in another area and then that happens again where people start running and panicking. I don't think that anything is happening. I think someone screams or yells and people start panicking more."

She says people are allowed to move freely inside the airport, but no one is allowed to leave.

Never ever thought I'd be in this situation. I just want to leave and feel safe. No new updates. #Istanbul

"For now, they're not giving us any other information other than the situation is under control," she says. "But, nothing, no new updates on when flights will be back up or what's going on outside."

She says passengers are getting most of their information from their phones. Some have been able to view a live video of protesters and a tank in the streets. 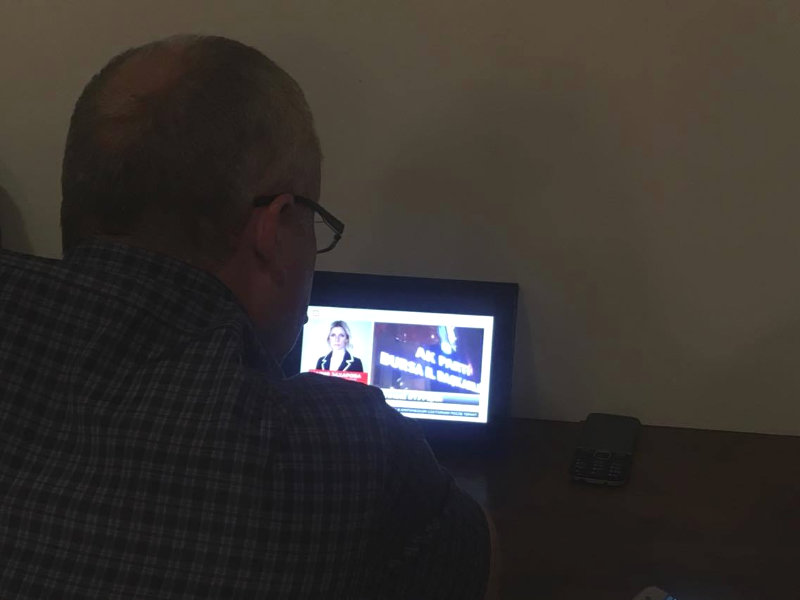 A stranded passenger in the Istanbul airport check a live stream for news of the coup. Joanne Serrieh / Capital Public Radio
Follow us for more stories like this