Chances are you’ve never seen a live performance of “Bells Are Ringing,” (the last time it was performed locally was in 1959 at the Music Circus) though you may have encountered the 1960 movie with Judy Holliday and Dean Martin. But even though this show is rarely staged, several of the songs may sound familiar, including “Just In Time,” a song from “Bells Are Ringing” that was taken up by Frank Sinatra, Tony Bennett, Julie Andrews, and even Nina Simone, and became a standard.

The lyrics (“I was lost… them losing dice were tossed…”) are straight out of the Rat Pack era, when Sinatra and his buddies would hold forth at a Tahoe casino that Sinatra owned for a time:

Gambling actually comes up quite a bit in “Bells Are Ringing,” which has a subplot involving a bookie operation – posing as a classical record company – that is actually taking bets on horse races, with comic results.

“Bells Are Ringing” also includes another song that became a standard, “The Party’s Over.” Doris Day, Nat King Cole and others covered it.

It’s good to hear these popular songs in the context of the show in which they originated. And the Davis Shakespeare cast, including several people with conservatory training and professional experience, performs them rather nicely.

Now, I will acknowledge that “Bells Are Ringing” is one of those 1950s musicals with a corny boy-meets-girl plot and a lot of hokey clichés. But Gia Battista and Ian Hopps do make a charming couple, and they meet some delightfully kooky supporting characters. One wacky scene has several aspiring actors desperately impersonating Marlon Brando yelling “STELLA!” in “A Streetcar Named Desire.”

So why is Davis Shakespeare doing a lightweight Broadway musical? Perhaps because this tale of giddy, impulsive love serves as a counterweight to “Romeo and Juliet,” which the company stages in September. Plus, the undervalued score for “Bells Are Ringing” has more than stood the test of time. So if your taste runs toward breezy musical comedy, give “Bells Are Ringing” a try. Heaven knows you may have to wait another 50 years for the next local production.

The Davis Shakespeare Festival production of “Bells Are Ringing” continues through July 31 at the Veterans Memorial Theater in Davis. 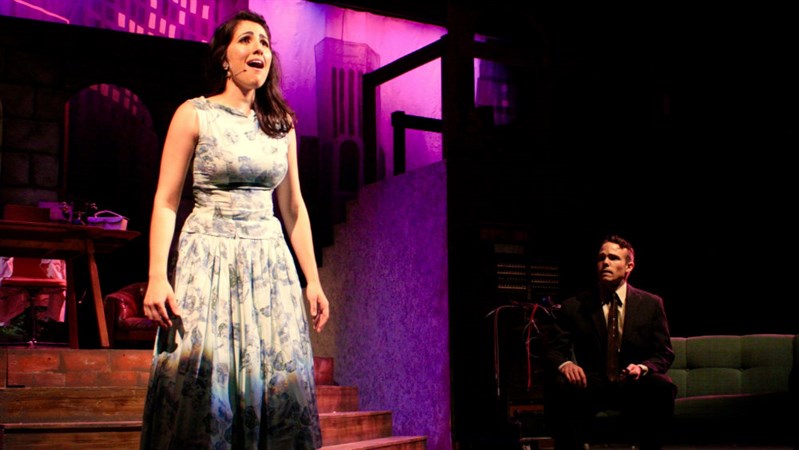