Shakespeare didn’t write “Cyrano de Bergerac” of course -- it was penned by Edmond Rostand in the 1890s. But this “Cyrano” is set in the 1600’s and it feels a lot like Shakespeare. It’s written in verse, there’s a balcony scene and there are sword fights. The character of Cyrano is as famous as Shakespeare’s Falstaff. But unlike the devious Falstaff, Cyrano is noble to a fault.

Still, you can’t get around that nose. Characters gossip about it right away, saying it’s “a nose that makes one feel like squealing. ‘Oh God no, it can’t be real. It must be detachable.”

Soon Cyrano and his monumental nose appear on stage, and his own description tops everything that’s come before: a witty, two-minute monologue about how different people react when they first glimpse the celebrated schnoz:

“The naive: How much to view the monument? The speculative: Excuse me, what is the rent on one or more of those unfurnished flats? The rustic: That’s no nose, Elmer. That’s a giant turnip! Or a midget marrow. You dig it up, I’ll go find a wheelbarrow.” (This monologue extends over two minutes, and gets funnier along the way.) Listen to the full 2-minute monolgue. 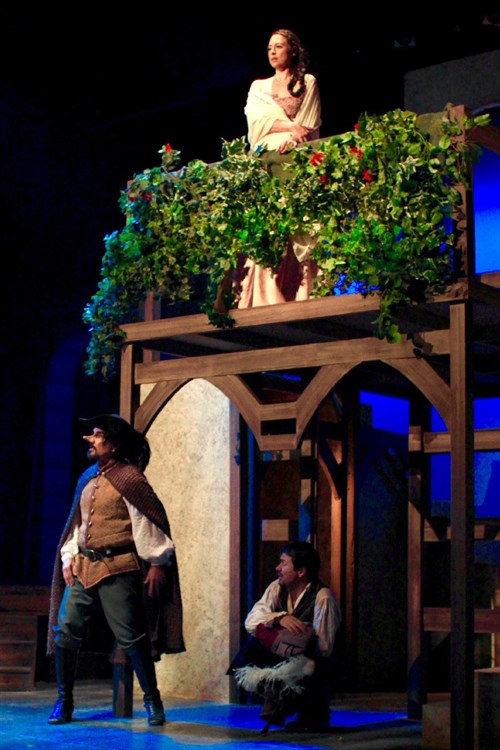 Cyrano’s boastful, acrobatic wordplay is heard throughout this show, and local professional Matt Edwards has a field day striking a heroic pose in a plumed hat, channeling Cyrano’s colorful language. Edwards is also lean and limber, and he looks natural wielding a blade in a duel.

Cyrano excels in everything he attempts, except when it comes to romance… he secretly adores the beautiful Roxane, but he’s sure that no woman could love a man with a nose so big. This quandary of unrequited love dominates the play’s more subdued second half.

By turns both sentimental and gallant, Cyrano is also self-deprecating. And that goes for this breezy summer show as well. It is sheer fun from first to last, and Edwards’ energy is irresistible in the title role. This Davis Shakespeare production also features lovely costumes and catchy original music. This appealing show ranks as one of the region’s best summer productions of a dramatic classic in recent years.

The Davis Shakespeare Festival's production of “Cyrano de Bergerac” continues through July 31 at the Veterans Memorial Theater in Davis, in repertory with the musical “Bells Are Ringing.”