The new head coach of the Sacramento Kings is Dave Joerger.

He began his tenure as Kings' coach at his introductory news conference by correcting his new boss, Vlade Divac.

"Hopefully, you're gonna love the California and have a good time here in the next four years," said Divac.

Almost immediately, Joerger showed he has no aspirations to perform Divac's job in addition to his own.

"His job is to pick players," said Joerger. "My job is to supply him with information of the kind of players that, you know what I mean? So, I can't go to a name. I'm more so looking for somebody who can put the ball on the floor in pick-and-rolls and make open three-pointers who doesn't play point guard. Ok, then he can go work on that. He can say, 'I got this, this, this. I got this option,' and work through it together. I think that part of it is fun." 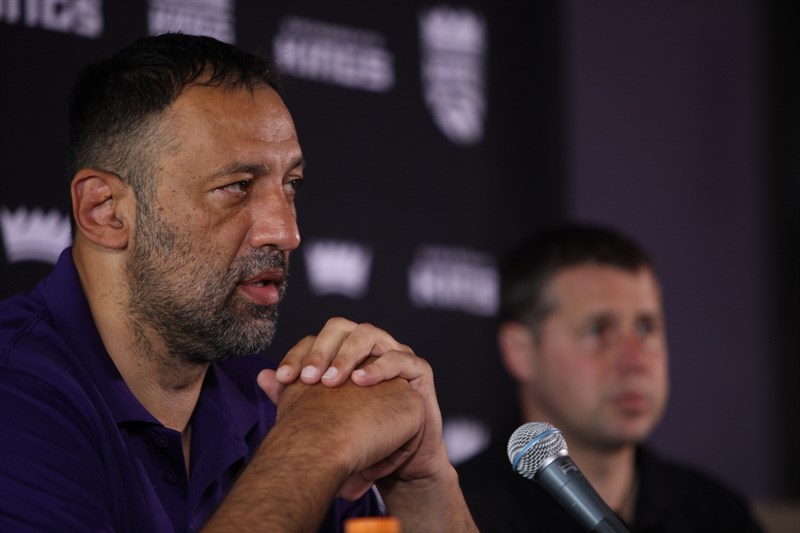 "I would lie if I say I didn't hope something like this was gonna happen. Obviously, I took time and I was expecting someone was going to lose job in the playoffs," Divac said. "When Dave was available, I had no doubt this was a guy we want to bring here."

The Grizzlies made the playoffs this year with a .500 record. According to Joerger, the Kings likely must do better than that to play in the post-season next year.

"You want guys to be on time. You want guys to be professional. You want guys to participate in practice and give everything that they have to give and the culture of work has to be laid down here," he said. "And that's gotta be the foundation of what we're trying to do.  We don't have a rookie young team, but we kind of have a young team that has to develop great work habits. If they go through that together that can be very bonding and you find out who's all in and who's not all in."

"Zach as a young player -and what he has matured into, how giving he is in the community, what a team guy he is, and just as he got older and he realized some things. You know, people said some tough things about Zach. He went through some tough times early in his career and he look at what he's been able to do and I'm certainly hoping Zach goes to the hall of fame. I gotta lot of love for him."

Cousins led the team in scoring and rebounding last year, but has also been widely criticized for complaining about calls during games instead of playing defense.

Joerger's teams won five titles while he was in professional basketball's "minor leagues."

He is the Kings' ninth head coach since the team last made the playoffs in 2006.