Carly Fiorina was scheduled to speak at this weekend's California Republican Party convention well before Ted Cruz picked her to be his running mate. But for Cruz, the timing couldn't have been better.

A big reason Cruz chose Fiorina is his hope that she can help him win delegates in California's June 7 primary.

Fiorina, after all, won a statewide GOP primary in 2010 when she ran for U.S. Senate, before losing in the fall to Democratic Sen. Barbara Boxer. She also spent several years in Silicon Valley as CEO of Hewlett-Packard.

Speaking Saturday night to state party leaders and activists, Fiorina made the case for Ted Cruz and against Donald Trump.

Trump and Hillary Clinton are "two sides of the same coin," she said, echoing a similar line from Cruz, who spoke at the convention earlier Saturday.

Fiorina said she understands why Trump has drawn so much support from voters but suggested those voters were wrong.

She projected confidence that Trump would not win enough delegates to clinch the GOP presidential nomination before the Republican National Convention in July.

Fiorina was the final speaker at the semi-annual state party convention, a convention that has rarely drawn as much excitement as it did this weekend.

You can hear more on the convention Monday on Morning Edition and Insight on Capital Public Radio.

Ted Cruz is counting on his campaign organization to block Donald Trump from clinching the Republican presidential nomination when primary season ends in California on June 7.

The Cruz campaign has been at work in California for months. And volunteers in red T-shirts showed up in force to the California Republican Party convention in Burlingame this weekend.

"I was here at the convention (Friday) morning at 5:30 a.m. putting up all these 800 signs that you see of Sen. Cruz," says Toni Alosi, a 40-year-old IT worker who lives in the San Mateo County town of Belmont. 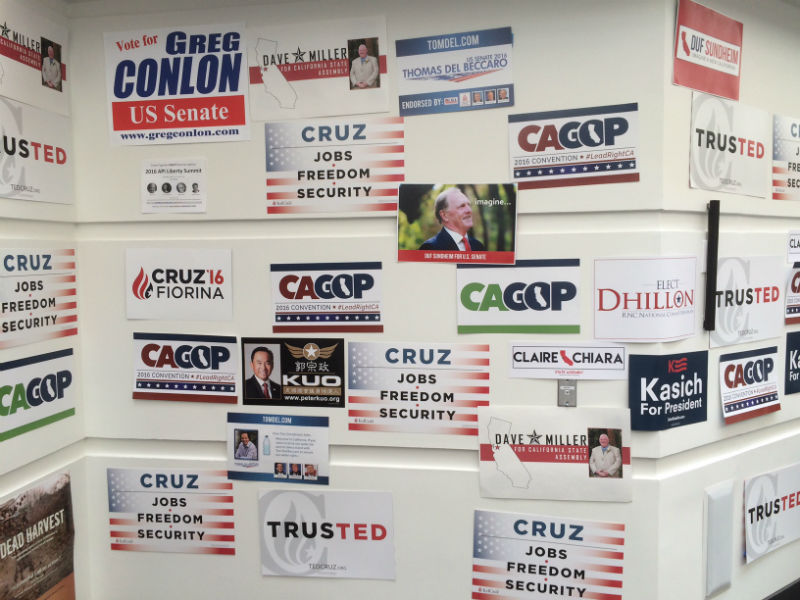 The Cruz and Trump campaigns could not be more different. One relies on free media to bolster its TV ads; the other on micro-targeting voters through its data operation. That includes deploying volunteers to make phone calls and go door-to-door.

The question is whether Cruz's approach will work in the most populous state in the nation. Polls show Trump with a significant and growing lead.

"There is no state larger or more media driven than California," says Republican political consultant Mike Madrid. "It's how voters have for the past 40 to 50 years gotten their voter information, and it's where they will continue to do that."

But Cruz's campaign is confident it will win delegates here, particularly because of the way California Republican delegates are awarded: three delegates in each of the state's 53 congressional districts and it's winner-take-all.

Many of those districts have very few registered Republicans, and the Cruz campaign believes its superior turnout operation will trump Trump.

But at the technical level, he says, "Cruz does have a superior ground game."

The results of the primary on June 7 will determine which campaign is superior.

Fiorina heads to Indiana where Cruz is hoping to gain more delegates before heading to this year's Republican Convention.

"California is at a crossroads. California is going to decide this Republican primary," he told the crowd of delegates and party activists at the state GOP convention in Burlingame. "Whodathunkit?"

He promised to compete for all 172 delegates in all 53 congressional districts in his quest to prevent Donald Trump from clinching the GOP nomination.

The Cruz campaign pulled what it hopes is a surprise ace from its sleeve just before the candidate spoke: an endorsement from former California Gov. Pete Wilson, who took the stage to introduce Cruz.

"We can't afford a wild card," Wilson told the crowd, in an apparent reference to Trump or Hillary Clinton.

The audience reacted more favorably to Cruz than they did to Trump Friday, which is no surprise in a room full of party leaders. His campaign organization was also on display at the convention. Volunteers in red shirts swarmed the halls, and Cruz campaign signs outnumbered the other candidates.

"As Republicans in California, y'all are a hardy bunch," Cruz said. "You are used to adversity. And you have seen first hand the absolute disaster, the absolute train wreck, that is out-of-control liberalism."

He pointed to the state allowing water to flow out to the ocean to save the tiny, endangered Delta smelt rather than storing it for the next drought.

And Cruz praised his newly-announced running mate, former Hewlett-Packard CEO and California Republican Party 2010 U.S. Senate nominee Carly Fiorina. He said Clinton is "terrified" of Fiorina and added that he can picture Clinton "tossing and turning, tossing and turning - in her jail cell."

Fiorina will be the final speaker of the convention at Saturday night's dinner banquet.

.@tedcruz takes the stage at #CAGOPConvention Here's a look at his @PolitiFact Report Card https://t.co/K0NOXvVPoQ

.@tedcruz wraps up at the @CAGOP, speaking for about 25 min. pic.twitter.com/peFI0avO9a

"@realDonaldTrump has given thousands of dollars to @JerryBrownGov, @GavinNewsom & @KamalaHarris," says @tedcruz, drawing boos from @CAGOP.

Yep, there's evidence to back up @tedcruz's claim that @realDonaldTrump gave thousands to @JerryBrownGov, years ago pic.twitter.com/Dy9N1yVGYt

No protesters today at #CAGOP -- If there were, Ted Cruz might talk to them -- there was a fact check about that https://t.co/60Bn923Kp0

We're awaiting our first speaker of the day, Ted Cruz, who's expected to address the delegates shortly before. His running mate, Carly Fiorina, is dinner speaker. Yesterday, delegates heard from Donald Trump and John Kasich.

Listen for Capital Public Radio's Ben Adler on NPR's Weekend All Things Considered today at about. He'll also be on the newscast of Sacramento's ABC10 TV.

And to see how truthful the candidates are being this weekend, be sure to check out our coverage from PolitiFact California's Chris Nichols.