The second Sierra snowpack measurement of the winter is Tuesday. January has brought much needed snow, but February may start a bit more slowly.

It was the best month for snowpack in January since 2011.

And the statewide snowpack is above normal.

"We've not had a snowpack for the last four years, anything worth writing home about, so this is obviously very significant for this time of year," says Meteorologist Michelle Mead, with the National Weather Service in Sacramento.

She says the recent pattern of storms every 1-to-3 days in California has shifted to the typical 3-to-5 days in-between weather systems.

And the outlook shows the first part of February will be drier than normal. 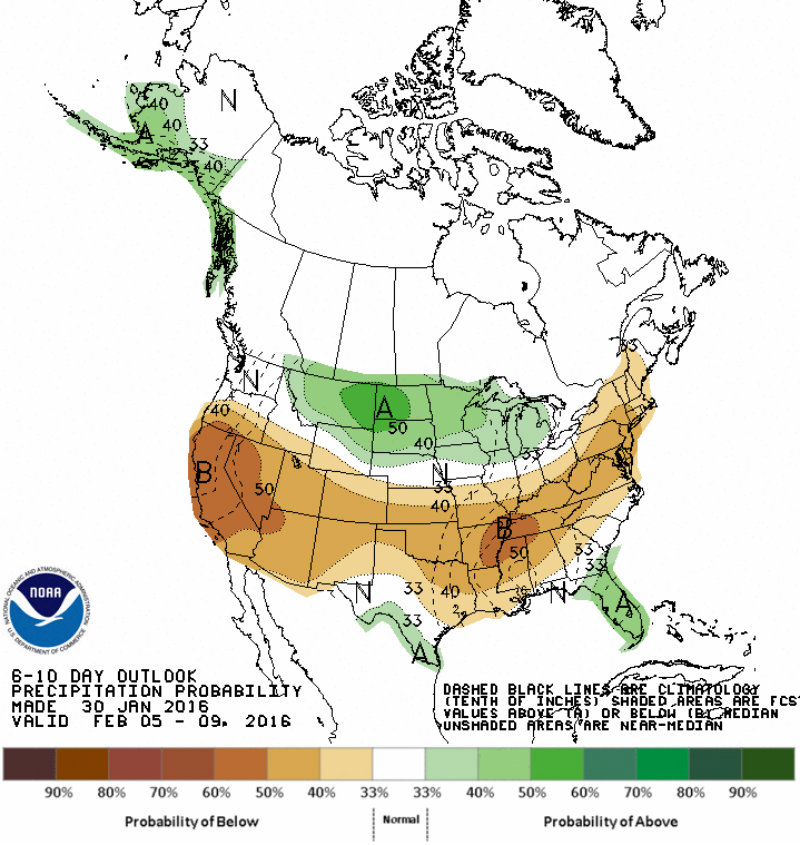 "El Niño, is still with us, so keep in mind the sea surface temperatures are going to remain in the strong category all the way into the March, April, May time frame, so there is still time to see more of those systems line up for us," Mead says.

Mead says more snowpack is needed in the northern Sierra, where the state's largest reservoirs are located, to provide water supply in the spring and summer.

Last April, the Sierra snowpack was minimal to non-existent. 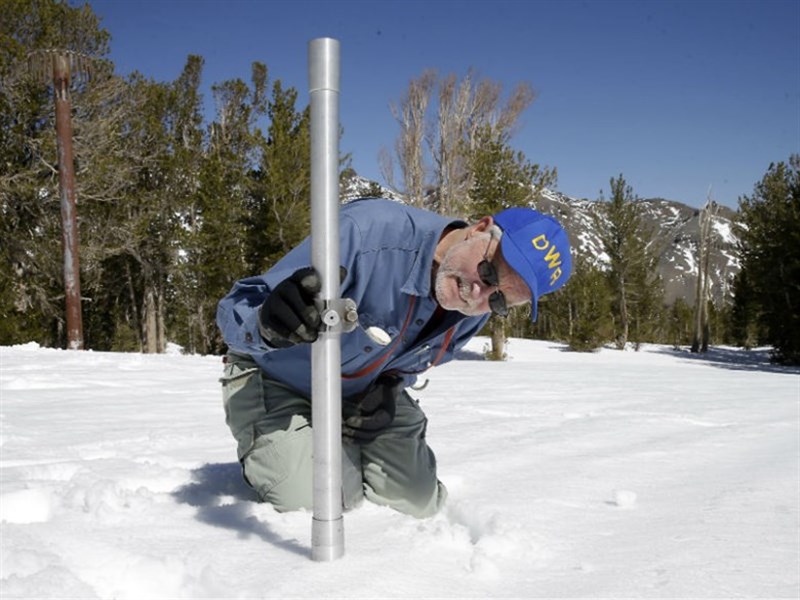 In this April 28, 2015 file photo, Frank Gehrke, chief of the California Cooperative Snow Surveys Program for the Department of Water Resources, checks the  snowpack depth during a snow survey at Leavitt Lake near Bridgeport Calif.  Rich Pedroncelli / AP

The first Sierra snow survey of the winter in December 2015 by the California Department of Water Resources showed snowpack at 136 percent of the long-term January average.

The second snow survey of the winter will be conducted by the Department of Water Resources Feb. 2 at Phillips Station off Highway 50 near Sierra-at-Tahoe Road.

Reservoir storage and snowpack have benefited from storms in January, but DWR officials say it’s far too soon to know whether enough precipitation will have fallen by the end of winter’s wet season to significantly impact the drought. 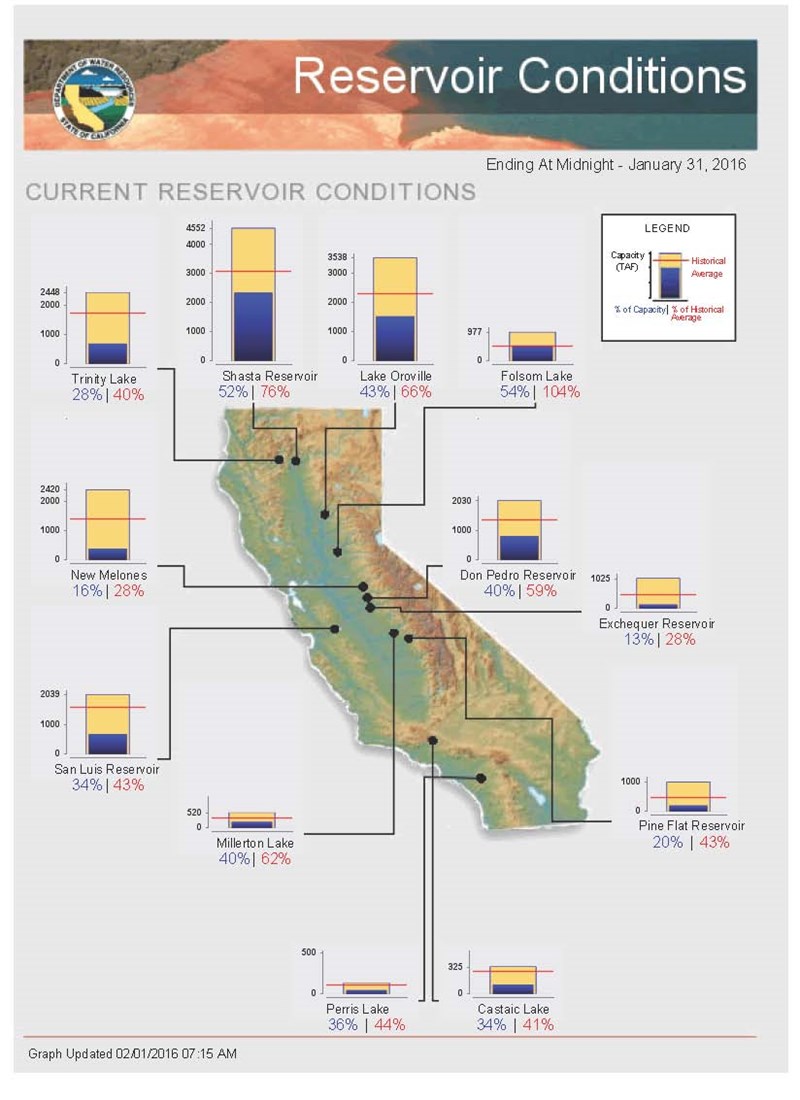 The U.S. Drought Monitor is optimistic but cautious about drought recovery.
"Many of the larger reservoirs in northern California and southern Oregon are still below half of capacity," the Drought Center noted in its January 28 report. "That is the reason for the long-term hydrological "L" label remaining well entrenched over the region at this time. Relative to last year, though, the trend is going in the right direction for now with a good chunk of the snow season still left to play out over the next two months." 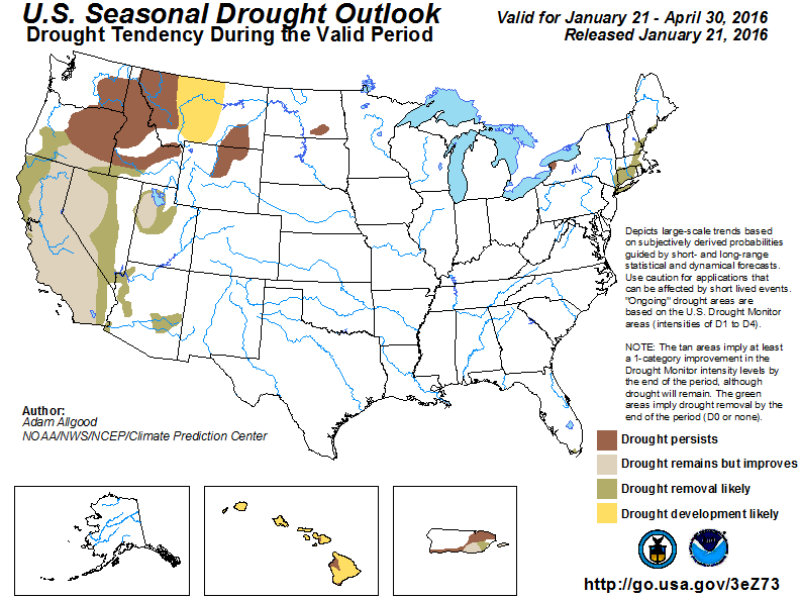