Despite several arrests over the weekend, activists demanding the repeal of Sacramento’s camping ordinance, are back in front of city hall to continue their protest. They say many of Sacramento's homeless are forced to sleep outside illegally. One man talks about the consequences of the camping ban for those like him, who have nowhere else to go.

Anthony Rodriguez, 48, faces a conundrum each night. He’s homeless and sleeps in a tent along Arden Creek in North Sacramento. But according to a Sacramento ordinance, laying out camping gear for consecutive nights within city limits is illegal.

He says he has no choice but to camp each night with his partner and their pet chihuahua.

It’s estimated that there are more than 2,600 homeless people in Sacramento. On any given night, depending on shelter bed availability, as many as 950 end up sleeping outside. Those who do, may receive a citation under the city’s camping ban.

The debate around Sacramento’s camping law, enacted in 1995, has been going on for years. On one side, homeless advocates say the law criminalizes people who are living in poverty. On the other side, city officials argue that the law is in place to maintain public health standards and ensure public safety.

But Sacramento’s homeless are caught in the middle. They set up tents or sleeping bags where they can and dodge police to avoid the tickets. Each morning, Rodriguez takes down his tent and tidies up his camp in case a police officer or a park ranger comes by.

Originally from Southern California, Rodriguez moved to Sacramento in 1999. He found a job in the fast food industry as a manager and later went to school to become a medical assistant.

He says his life was great. He had an apartment, a job and family. But when his mother passed away, all of that slowly unraveled. He ended up losing his job. He lived with his partner in cheap hotels for a while and eventually ended up on the streets.

In the three years he’s been homeless, Rodriguez says he’s received five camping tickets from police. The first one landed him in jail for 10 days. He was placed on probation. The most recent one in August was $170.

Rodriguez says clearing the tickets from his name would be the first step in getting a job.

“I’m going to start applications right now and pray to God I get a job again, it’s time to get back in there,” he says. “Being homeless was a challenge. It’s something I never want to go through again, never.” 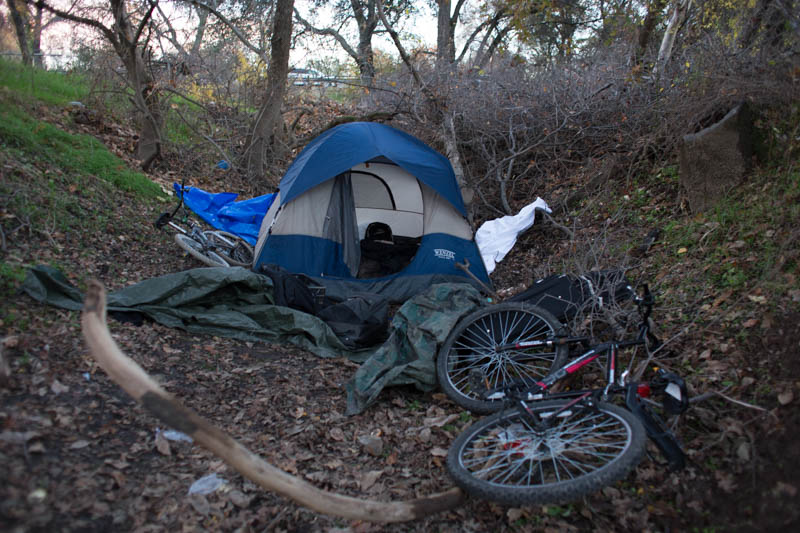 When a homeless person gets a ticket, he or she usually can turn to the Tom Clinkenbeard Legal Clinic. It’s part of the non-profit organization, Loaves and Fishes, which assists homeless individuals through a number of programs.

Ron Blubaugh is an attorney who’s been a volunteer with the group for nearly 10 years.

He says the majority of the people who go to the clinic have either been cited for riding Sacramento Regional Transit without a light rail pass or for camping.

Citations for camping can be written up as a misdemeanor or an infraction.

“If they're written as an infraction, it’s not really a serious offense, it’s sort of like jaywalking, but if it’s written as a misdemeanor, that’s more serious, that’s a record and that’s going to go with you,” he says.

Blubaugh says a ticket, no matter what type, will include a court date and a fine. If a person doesn’t show up to court and is unable to pay, a warrant can be issued for his or her arrest.

“They get entangled with all these tickets,” he says. “And warrants can be issued, if they don’t make their court date, it just complicates their lives.”

Those who don’t have the money to pay the fine have the option of clearing the tickets through community service hours at Loaves and Fishes. Each month at the Sacramento County Courthouse, there’s an hour designated specifically for Loaves and Fishes clients to resolve the fines.

Usually, the public defender reaches an agreement with the city attorney’s office and the court approves community service hours for the client.

On Dec. 18, Rodriguez was one of nearly a dozen people who were at the courthouse because of camping tickets. Most in the group chatted about why they were there. Rodriguez sat quietly by himself, waiting to go into the courtroom. He pleaded no contest to breaking the camping law and has until February to complete his community service.

He’s hoping he won’t get any more tickets but acknowledges that’s a possibility.

“I'm ducking and hiding still, but hopefully, I won’t [get another ticket],” he says.

Because those who are homeless sometimes have to sleep outdoors, Blubaugh says getting tickets is inevitable.

“If you get a camping ticket tonight and you can’t get into a shelter tomorrow, then you’re going to get another camping ticket tomorrow,” Blubaugh says. “The people that get them, they really  have no place to go, so the law is punishing people, really in my view, for status, not for an act that they have some power to correct.”

Homeless advocates say similar camping bans in other cities are being challenged. They point to a Department of Justice statement released in 2015, which called one law in Boise, Idaho unconstitutional. The Department of Housing and Urban Development have released statements suggesting alternatives to what it describes as "criminalization measures."

“I believe there is a national consensus that’s developing that these criminalization laws of homelessness are becoming in disfavor,” says attorney Blubaugh. “I don’t see it in Sacramento.

The city says it has no plans to change the ordinance. According to Sacramento’s City Attorney, James Sanchez, two courts have looked at the ban and they’ve found it constitutional each time.

“Basically, the court said that the ordinance on its face is constitutional, it’s legal,” Sanchez says. “From the standpoint of California law at this time, our ordinance is legal.”

The city attorney also says the law currently being challenged in Boise, Idaho is different from the one in Sacramento because it’s more broad. A representative at the city attorney’s office says Sacramento’s law addresses issues of public safety, nuisance and sanitation.

Camping Out to Protest The Camping Ban

A group of activists, called the Community Dinner Project, is demanding that the city repeal the camping ordinance. For nearly a month, people have been camping out at City Hall to make their point.

James "Faygo" Clark, one of the lead organizers, says city resources should be put towards helping the homeless and not towards enforcement of the camping ban.

“[The camping ban] denies people the right to sleep,” Clark says. “People tell homeless people to go get a job, but how are you going to that, when you’re getting harassed all night, you’re getting citations and possibly even getting arrested.”

On Jan. 2, 49 officers descended on the group's protest site. Four people were arrested and three were cited under the camping ordinance. According to the city, there were about 30 people in the area at the time of the arrest and 15 were camping.

In a released statement, the city of Sacramento said protest participants who are homeless were offered alternate shelters at various locations around the city.

"The city of Sacramento acknowledges and recognizes the right of all citizens to exercise their right to free speech under the First Amendment to the United States Constitution," according to the statement. "However, the city also has an obligation to enforce laws involving the protection of public health and safety, including provisions of the Sacramento City Code that prohibit camping and the storage of camping items on public property.

City officials also say there is a long-range plan to help the homeless through rental assistance programs and more housing options.

"While the protesters are questioning the city’s camping ordinance, the city remains committed to supporting solutions that prevent and end homelessness," according to the statement.

Advocates say the long-range plan is good. But, the camping ban remains an issue for those currently on the streets.

“There is enough concern [in the city], that we are putting resources [into the issue of homelessness],” says Joan Burke, executive director at Loaves and Fishes. “But in the meantime, let’s stop arresting people.”

Can Newsom Build On Pandemic Lessons To End Homelessness?