A new Bay Area startup is like AirBnb, but for food. You can order homemade dishes online and then pick them up from a neighborhood cook. This week’s menu includes sweet potato biscuits and pumpkin pie.

Cook Lissette Silva works out of the kitchen in her neat craftsman home in Berkeley. It's filled with the smell of garlic and onion. Today’s dish is Caldo Gallego, a Galician stew with beans, chorizo and ham hocks.

The new service is called Josephine. It’s been a way for Silva to make money since she was laid off from a corporate job last spring.

Here's how it works: You go online and order dishes made by home cooks and then pick them up from their houses.

Customer Mandy Schmitt paid Silva $10 for the soup and a roll. Schmitt’s office is around the corner, she says she loves the convenience.

“It’s a lot of stuff that I wouldn’t normally cook for myself, I wouldn’t take the time to do it,” says Schmitt. 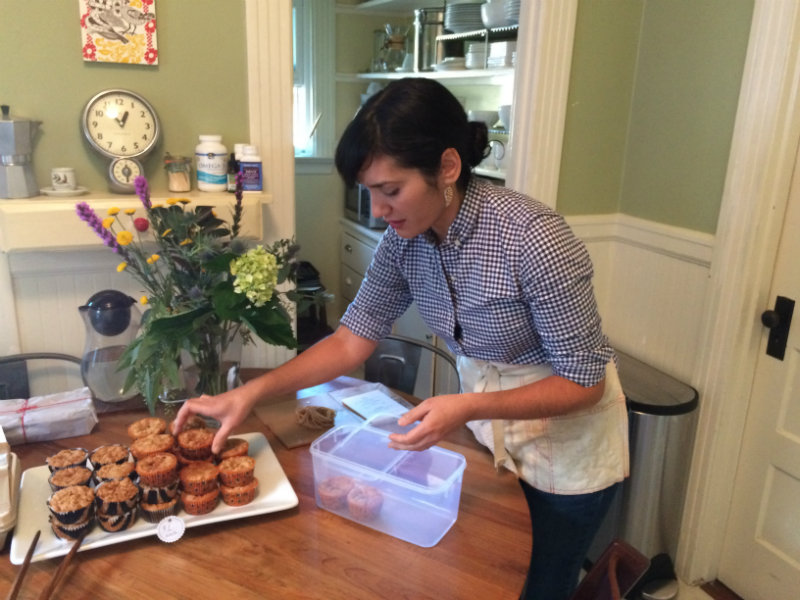 Lissette Silva in her Berkeley kitchen where she cooks meals for the online service Josephine. Lesley McClurg / Capital Public Radio

When Silva applied to be a cook she was one of 12 in the East Bay, now she’s one of 40. And, the service has expanded into San Francisco.

This week you can order Tom Kha soup from Micah in Bernal Heights, or a salmon burger from Lisa in Oakland. And, the company has its eyes on Sacramento as a possible future location.

Many of the home cooks say they love working from home. For Silva – she’s enjoying spending more time with her kids. Plus, the experience reminds her of her Latino roots.

“I’m not from here and I don’t have family around. I really miss the tribal upbringing that I had," says  Silva.

Customers like Schmitt say they prefer buying from a home cook over a restaurant.

“I think it’s actually really comforting to come into the kitchen and watch where it’s prepared and cooked.”

But, some Californians have mixed reactions when you ask them about eating from someone’s home.

“I would have some concerns about other people’s kitchens, and their cleanliness for their food handling,” said Richard Lincoln of Sacramento.

“It’s pretty shady, you don’t know what they put in it -- like sanitation-wise,“ she says.

Anticipating such fears, company officials from Josephine use an outreach team to vet potential cooks and inspect their kitchens before they can work through the company.

Gonzales says, “I’ve always said, ‘If only someone would pay me for this.’”

Betts opens the pantry and checks out the refrigerator. She asks Gonzalez about various food safety procedures.

But, Josephine still may not be legal.

Alameda County is currently investigating whether the service is violating the California Retail Food Code. The law says you can’t sell food out of a home to the public without a health permit. The county refused to talk to Capital Public Radio citing the open investigation.

In a written response the state department of public health said Josephine could be shut down.

“When they were making these rules they weren’t really thinking about these types of businesses and the way they operate – and so the laws really aren’t designed even to apply to these kind of businesses so that presents a major challenge,” says Catlin.

He says companies in the sharing economy often operate in grey legal terrain.

“Ultimately a lot of it depends on how you actually classify the business (Josephine). Are these independent people operating restaurants, or are they thought to be independent people simply selling small amounts of food out of their home?" asks Catlin.

In the meantime cooks are blazing ahead. For Silva it’s been a great way to connect with her neighbors.

“They come on in. They get their meal. We chit chat and they take off!” she says.

Despite the on-going investigation, Josephine is considering expanding beyond California borders to Seattle or Austin.