Update at 9:50 a.m.: Former California Senate leader Darrell Steinberg, who served on the city council before winning election to the state Legislature, says he will decide whether to run for mayor "over the next couple of days."

Steinberg says he went to sleep Tuesday night before the mayor made his announcement, and he woke up Wednesday morning to his phone "beeping off the hook," adding that he's received lots of interest.

Sacramento City Councilwoman Angelique Ashby will announce her candidacy for mayor at 11 a.m. in East Sacramento, where she'll be joined by the local fire fighters union.

Johnson is expected to meet with reporters at 10:15 a.m. in Oak Park.

Capital Public Radio will continue to follow this story throughout the day.

Original story: Kevin Johnson, the Sacramento native and NBA star who returned to his hometown to become its first African-American mayor, says he will not seek a third term in next year's election.

"After much thought and soul-searching I have decided not to run for a third term as mayor," Johnson wrote in a statement released on Twitter late Tuesday night. "It was an incredibly difficult choice, but one I feel confident about."

The mayor went on to write that he is not leaving for another job: "While there are many intriguing opportunities out there (and I'm excited to explore them) I honestly don't know what's next for me."

Johnson defeated two-term incumbent Mayor Heather Fargo in a bitter 2008 campaign. His legacy will include saving Sacramento's lone major professional sports franchise, the NBA's Kings, from leaving town and building a new downtown sports arena. He has also been shadowed by allegations of sexual misconduct which have re-emerged in recent weeks - although the allegations are not new and were known to voters during the 2008 campaign.

Former California Senate President pro Tem Darrell Steinberg, who served on the city council before entering the state Legislature, has also been mentioned as a possible candidate. 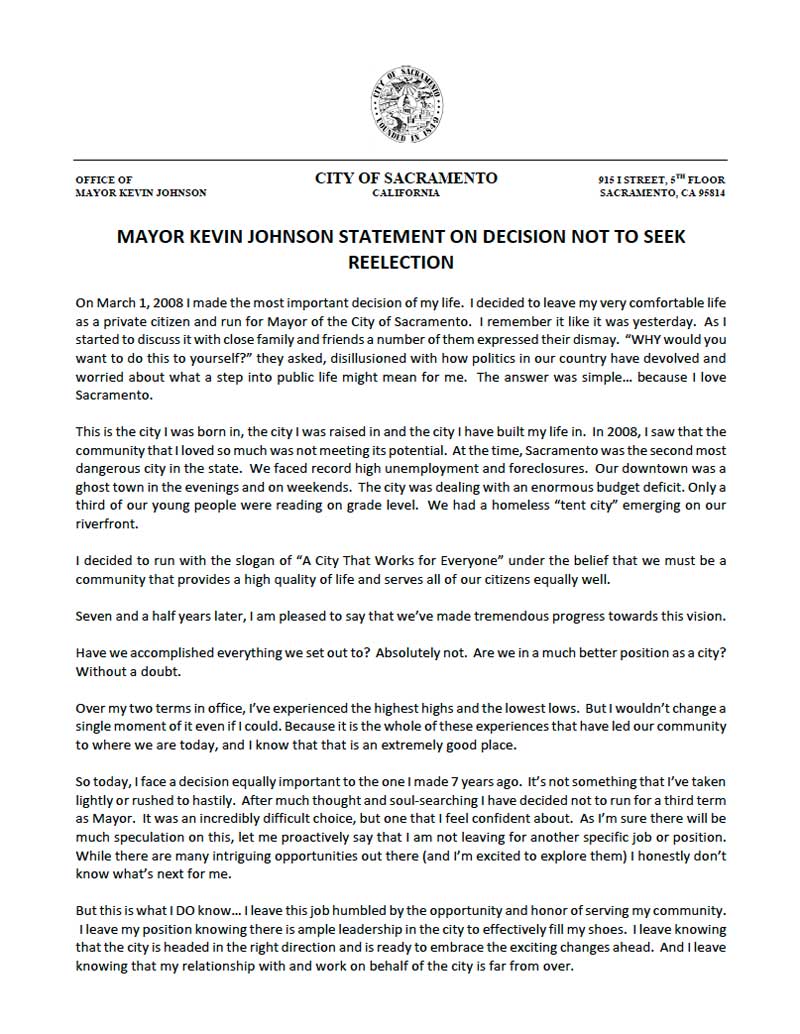