It’s no surprise that California had historically low snowpack in 2015. But new research published in the journal “Nature Climate Change” shows snowpack in the Sierra Nevada in 2015 was at its lowest level in 500 years.

“We realized the 2015 snowpack was going to be low, we’d heard it was at five percent of average over the historical record over the 20th century," says lead author Valerie Trouet, with the University of Arizona Tree Ring Research Lab. "But we were surprised to find it was the lowest over the last 500 years. We didn’t expect it to be this dire.” 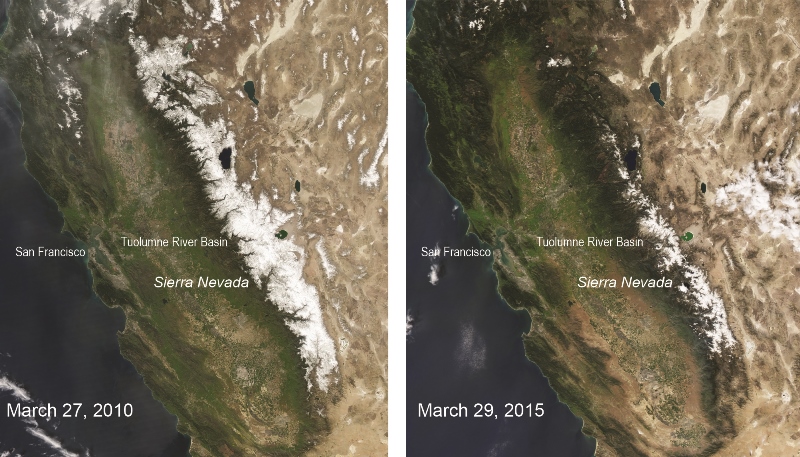 These two natural-color satellite images of the snow cover in the Sierra Nevada in California and Nevada show the last year with average winter snowfall, 2010, compared with 2015 -- a year that had the lowest snowpack in 500 years. The images were taken by the Moderate Resolution Imaging Spectroradiometer on NASA's Aqua satellite Photo / NASA/MODIS

Researchers looked at tree-ring data from Central Valley blue oaks going back to 1405. Trouet says the widths of the rings reflect winter precipitation.

“The storms move from the North Pacific first over the Central Valley, drop their water there, then continue further east over the Sierra Nevada and drop their precipitation as snow there,” says Trouet.

Trouet combined tree ring data with annual snowpack measurements since the 1930’s and winter temperature reconstructions spanning the years 1500 to 1980. The different measurements all lined up. When winter precipitation was lower and temperature was higher, snowpack was lower.