Amazingly, it has been 39 years since the Music Circus last staged “Hair.” There have been professional revivals in many other cities, none in Sacramento… at least not until now. The score is studded with songs that have held up remarkably well across the years, including the opening number, "The Age Of Aquarius."

I giggled at the line about “mystic crystal revelation” … but “Hair” premiered at the apex of the psychedelic era. You’ll hear some vintage dialog between the songs as well.

Like this line from Berger, "Transcendental meditation on the ocean of reality is Love! Love! Love!"

“Hair” has always been billed as a rock musical, but most of the songs are closer to mainstream pop, like this gentle tune about love and regret. 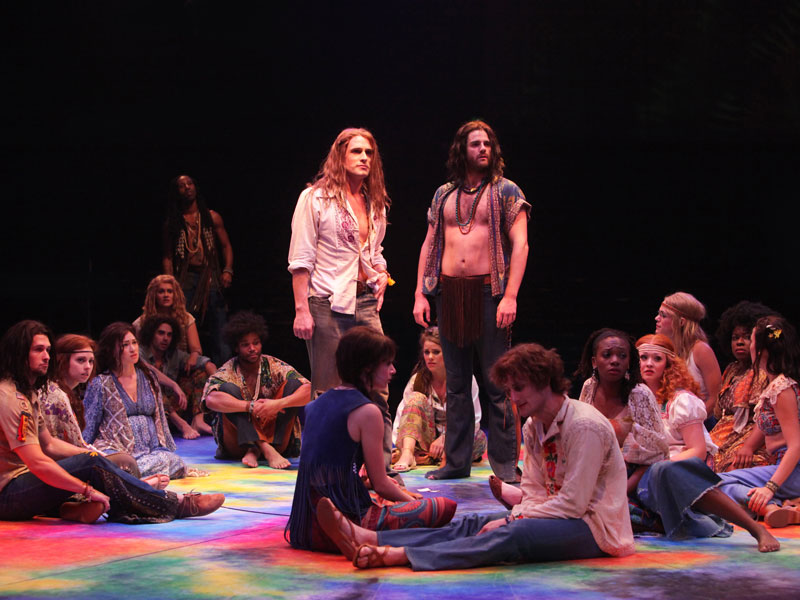 Oliver Thornton (left) as Claude and Peter Saide (right) as Berger and the company in HAIR, produced by Music Circus at the Wells Fargo Pavilion Aug. 18 to 23. Charr Crail / California Musical Theatre

“Hair” brims with youthful rebellion and provocative attitude, sometimes with a political slant. But above all, “Hair” is a powerhouse dance show, with scantily-clad flower children kicking up their heels as they stream down the aisles and prance across the circular Music Circus stage, sections of which rise up like a wedding cake. The show’s sexual references, which shocked some people in the '60s, now seem almost tame by the standards of contemporary cinema.

This Music Circus production sustains a feisty energy and a winning attitude, which more than compensates for the occasionally dated material. This is a show that’s fun to watch, and it was good to see the Music Circus audience embrace a show they haven’t seen in nearly 40 years. Better late than never.