Barbara and Patrick Jiron got a knock on their door of the Lake County home around 9:30 last Sunday night. It was a sheriff's deputy, telling them the Rocky Fire was heading their way and they had about 30 minutes to pack and leave. The couple had known that was a possibility. Patrick says earlier he’d walked to the top of a nearby ridge and had seen the fire getting closer.

"It looked like the flames were going 40, 50 feet high in certain areas," he says. "And it was wide. It was a panorama of smoke. And it looked like it covered probably, maybe up to 10 miles in scope." 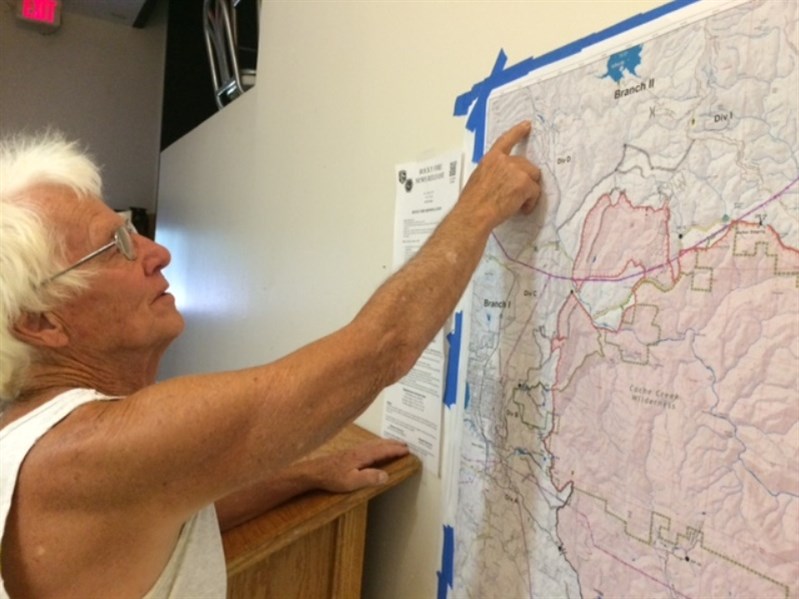 Patrick Jiron point to his house on a map. It's several miles outside the Rocky Fire burn zone, which is marked in red. Katie Orr / Capital Public Radio

The couple had already started packing some things when they were ordered to evacuate. And even though they were prepared, Barbara says it was still a shock.

"When they came to the door and said it’s eminent and that we had to go, my stomach just dropped,"she says.

The Jirons are among 13,000 people who were either ordered or advised to evacuate because of the Rocky Fire. Cal Fire says about 800 were allowed to return home today.

The couple headed to an evacuation center about 30 miles south in Middletown, California. They don’t know if their house is OK, though it’s currently a few miles outside of the burn zone. They’re hoping they and their two dogs can go home next week.