Early in the morning on a recent Saturday, the lawn at John Still Elementary in south Sacramento's Meadowview neighborhood is covered with tools.

About 45 volunteers load long poles with caged baskets, ladders, buckets and boxes into cars destined for homes in the nearby Pocket neighborhood, where citrus has grown unpicked. 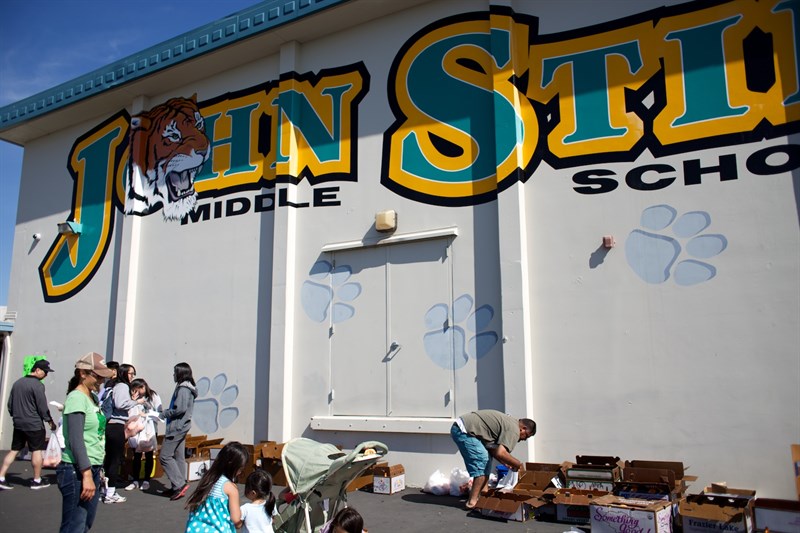 Gleaned fruit is distributed to families in the parking lot of John Still School in the Meadowview neighborhood of Sacramento.  Andrew Nixon / Capital Public Radio 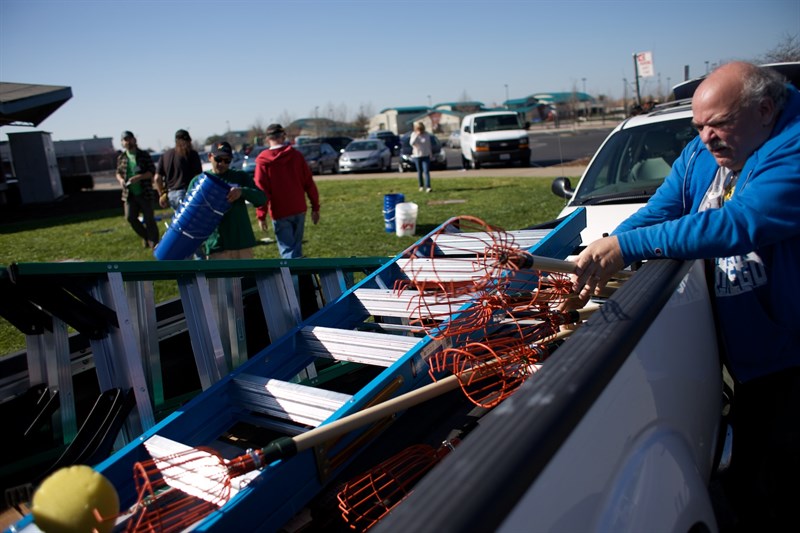 Kim Braun of Antelope loads a pickup truck with tools before Soil Born Farms workers and other volunteers head out to glean fruit in Sacramento.  The harvest will be distributed to families at John Still School.    Andrew Nixon / Capital Public Radio

Dominic Allamano is the coordinator for Harvest Sacramento. He cringes when he sees oranges or mandarins withering on trees.

"There might be a couple million pounds going to waste in the city," says Allamano. 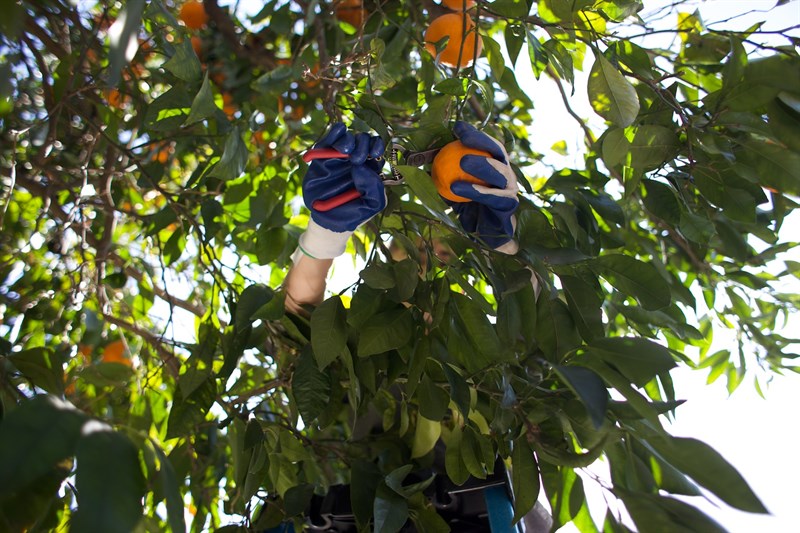 Aaron Farnan of Fair Oaks traveled to the Pocket neighborhood with his mother to glean fruit at private homes.  The fruit will be distributed at John Still School in the Meadowview neighborhood of Sacramento.   Andrew Nixon / Capital Public Radio

Volunteer Megan Walsh says the trees are bending under the weight.

"The tree was so full and heavy that they've been splatting on the ground when we've been dropping a few," she says. 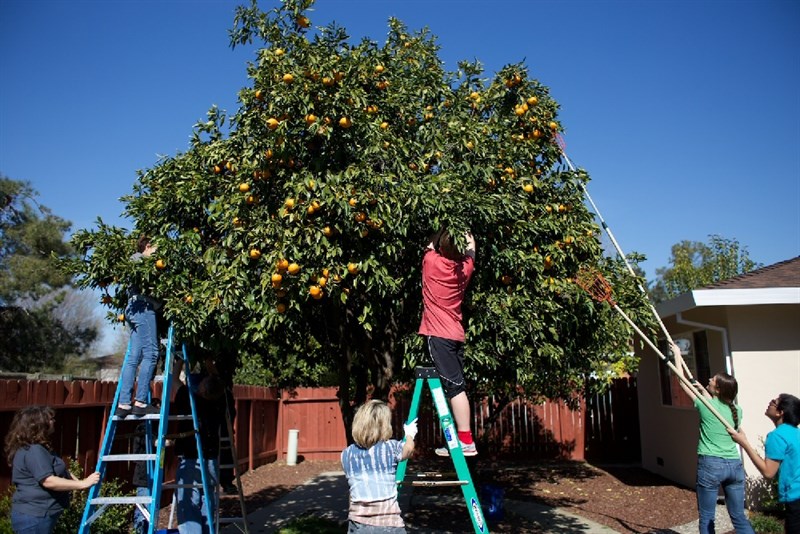 Volunteers pick fruit at a residence in the Pocket, a neighborhood near John Still School. The school is in the Meadowview neighborhood which is considered a food desert.   Andrew Nixon / Capital Public Radio

But, some trees are harder to pick than others. In the hot sun sweat gathers on Erika Fucarino's brow.

"This is not an  easy tree to work with. Because there so high, so high this time. It's a real work out," she says.

Fucarino has been harvesting navel oranges from the top branches of a tree with her daughter and son.

A few hours later their labor pays off. 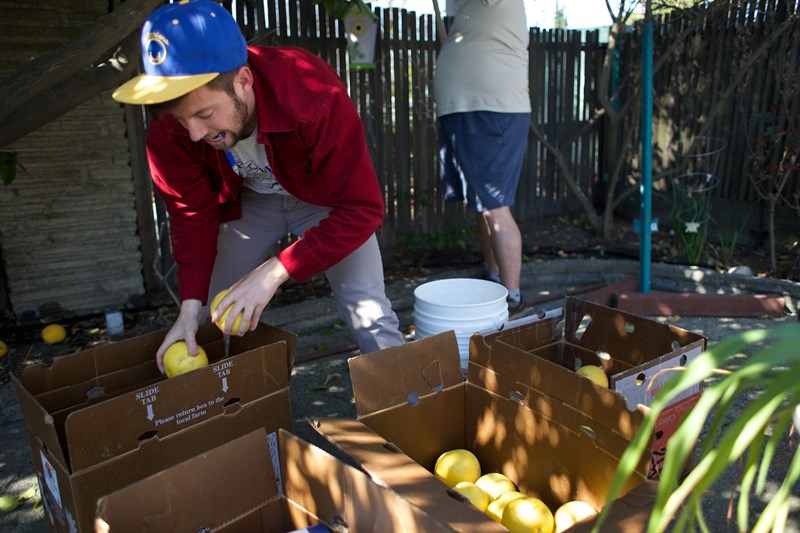 Matt Read helps with gleaning fruit as a team leader for Soil Born Farms.  He directs volunteers and coordinates their movement between homes that are donating fruit.   Andrew Nixon / Capital Public Radio

Coordinator Dominic Allamano tallies a wide array of fruit picked from about 15 trees.

"We've got grapefruits, three or four kinds of oranges, mandarins, tangerines. We might have some lemons coming back. We've got some giant Washington navel oranges," he says.

The total is a ton. 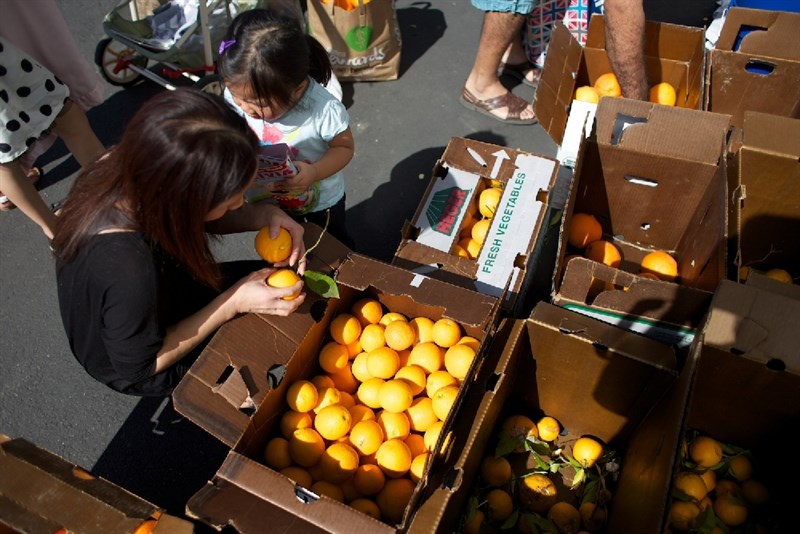 Gleaned fruit is distributed to families in the parking lot of John Still School in the Meadowview neighborhood of Sacramento.   Andrew Nixon / Capital Public Radio

At the end of the morning low income families from Meadowview fill overflowing grocery bags with the day's harvest.

The next fruit gleaning will be in north Sacramento on March 21st.

Read stories from and listen to our documentary on food insecurity in south Sacramento, Hidden Hunger, part of CapRadio's multimedia series The View From Here.