The crows come after sunset, swarming in from all directions against the backdrop of a darkening sky.

"We like to find our camp spot before the crows come," says Chris Gauthier, a man who sleeps on the streets of Sacramento.

Gauthier and Karisten Lockhart know these birds well. The homeless couple must be aware of the birds when they look for a spot to sleep at night. 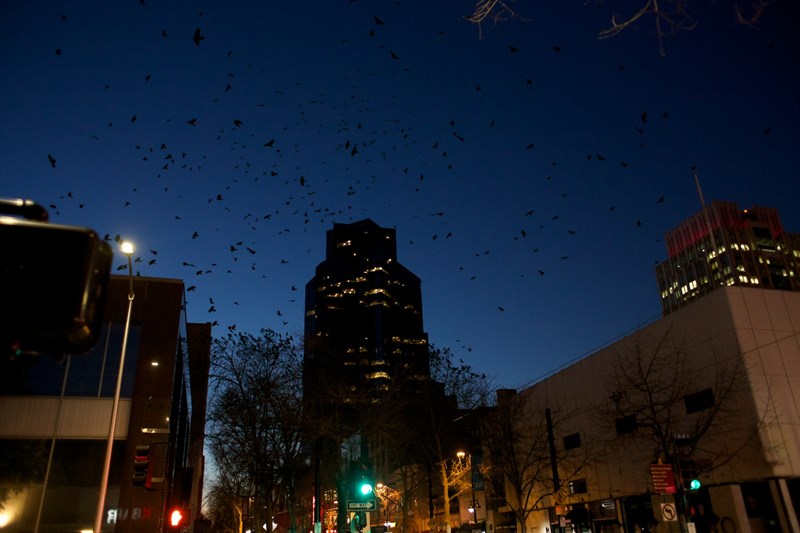 Thousands of crows roost on tree tops along 10th street in downtown Sacramento. Over the years, they’ve been reported along K street and on J between 8th and 9th.

"I’ve lived here 30 years, and it was a well established pattern in the 1980s," says Dan Airola, Editor of the Central Valley Bird Club Bulletin.

Airola estimates anywhere between 10,000 and 20,000 crows roost downtown. During the day, they forage for nuts or grains in fields and suburbs as far as 20 miles away. At night, they come to sleep in the city because it’s safe and warm. 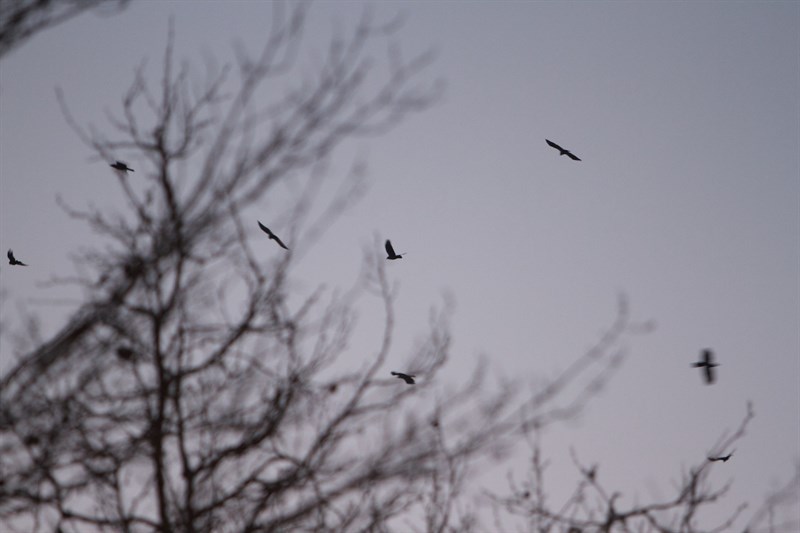 "What’s unique about the downtown areas is that it doesn’t have many ground predators, raccoons and things that could crawl up trees and prey on crows, and secondly this urban area absorbs a lot of heat during the day and it radiates back at night," says Airola.

Crows have also been spotted roosting in Yuba City and Fresno. A UC Davis study from 2000 found 24 cities in the Central Valley and Southern Coastal California with large flocks.

Retired UC Davis researcher Paul Gorenzel says crows didn’t always roost in cities. He says in the late 1800s until the mid 1900s, crows roosted in the country where farmers treated them like pests.

“We think that they were being persecuted basically,” says Gorenzel.

"People would put dynamite in the roost trees and blow up the trees after the birds arrived for the night, hunters would gather around the roosts and shoot the birds, and we think that probably some crows to avoid this, started to look for different roost sites and the cities turned out to be the place to go," he says.

Range maps are based on available occurrence data and professional knowledge. They represent current, but not historic or potential, range. Unless otherwise noted above, maps were originally published in Zeiner, D.C., W.F. Laudenslayer, Jr., K.E. Mayer, and M. White, eds. 1988-1990. California's Wildlife. Vol. I-III. California Depart. of Fish and Game, Sacramento, California. Updates are noted in maps that have been added or edited since original publication.

Gorenzel says those refugee birds started a tradition of roosting in cities rather than in the countryside, and the practice continues to this day.

"If they’re roosting there [in the city], they probably survive much better and produce more offspring that will continue to do that same thing."

The crows may be beautiful at night when they fly in, but their waste is expensive to clean up. 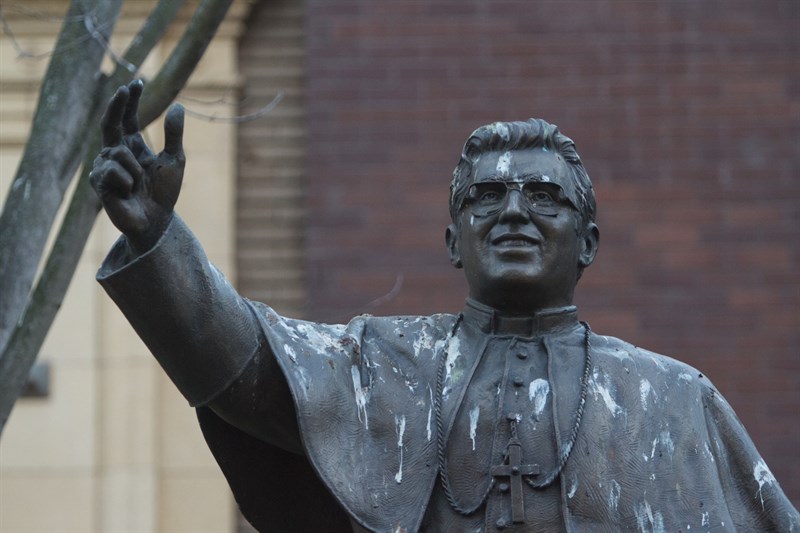 The Sacramento Downtown Partnership powerwashes sidewalks at least once a week, in part because of the bird droppings. Community Services Manager Phillip Sherman says sidewalks are also washed on request.

"A merchant will call us, and they’ll say we have some excrement somewhere, whether it be human or crow, and we’ll get to it right away," says Sherman.

Letting the bird droppings accumulate is not an option. The waste carries campylobactor, a bacteria that could potentially make humans sick.

The Downtown Partnership has used a boombox to deter crows from trees. 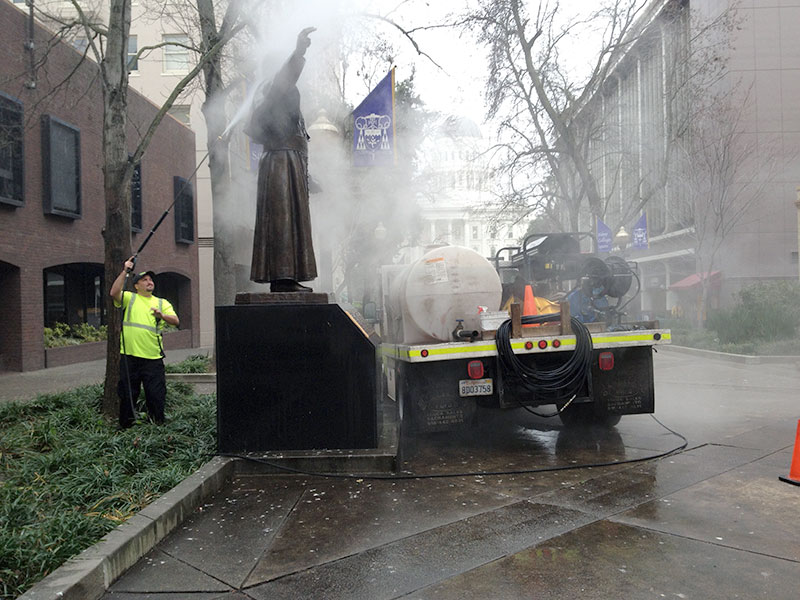 Sacramento City Hall has also been trying to scare the crows away. Recordings of predators are broadcast every night and morning outside City Hall. Bill Sinclair, a property superintendent with the City of Sacramento says after three or four years, the tactic hasn’t worked.

"It works better for the pigeons in the summer, but the crows are a pretty smart bird relatively speaking, and they’re not deterred all that much," says Sinclair.

The city says it will try a new recording. But Dan Airola from the Central Valley Bird Club says that won’t work either.

"They’ll just relocate to another area in town," Ariola says. "They’ve learned to use this, it’s a successful life history strategy for them, and you can’t completely control mother nature."

The downtown crow roosting season will be over soon. In the warm weather the birds breed and nest in suburbs and wooded areas. But they’ll be back in the city next fall. 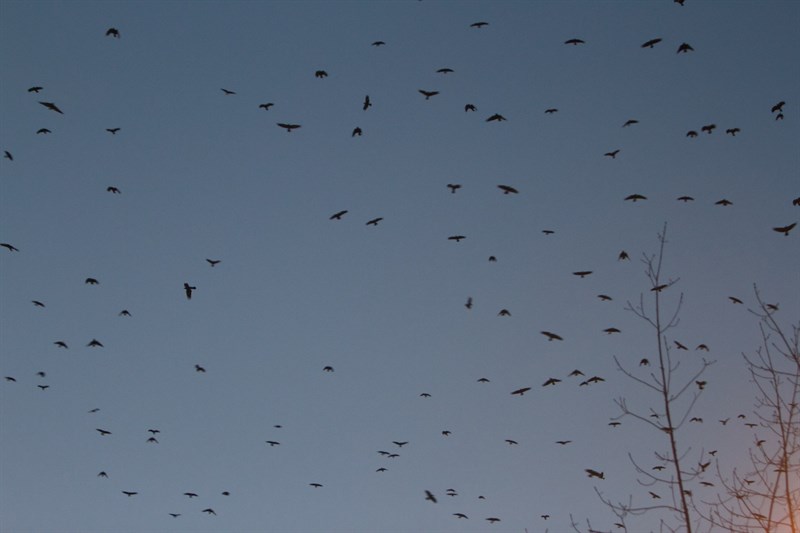 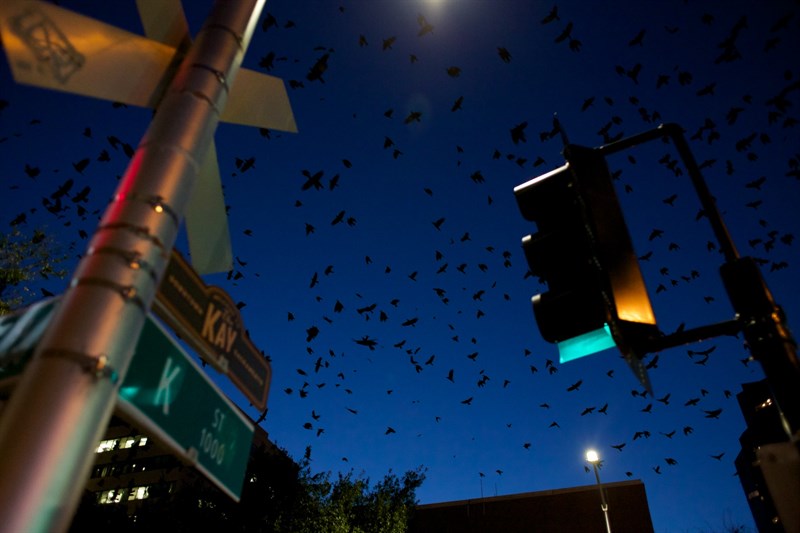